Sightseeing in Nijmegen - what to see. Complete travel guide 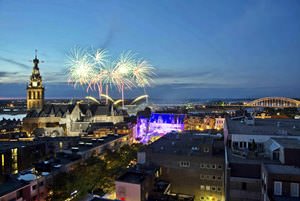 Not far from Rotterdam, on the bank of the picturesque Waal River, tourists can visit a beautiful Dutch city called Nijmegen. This is a peaceful and serene old city with an incredibly calm atmosphere. Don’t be surprised to see ducks that freely walk on the streets of Nijmegen. It is not rare to see them here. Local people enjoy a steady, unhurried lifestyle. They never hurry anywhere, relaxingly walking on local streets, and smile to even unknown people. There is one more distinctive feature of this settlement – the weather is usually warm in Nijmegen, which is not typical for the Netherlands.
During the Roman Empire period, there was a military camp in the valley of the Waal River. Later, a settlement named Batavorum appeared near the fortification. However, this settlement didn’t exist for a long time and was ruined during a battle. Soon after that, the settlement was rebuilt. The town started developing quickly, engaging itself in international trade with other countries. In 1230, the Holy Roman Emperor Frederick II granted the settlement the city status and rights. Seventeen years later, Nijmegen became a part of the Guelders County. During several centuries, the city fought with the Spanish. During the reign of Louis XIV, the French occupied this Dutch city.
Nijmegen remained the capital of Gelderland until 1794. However, when the French established their authority in the city, the capital was moved to Arnhem. During the next twenty-four years, the former center of the county was a strategic point with a stronghold. However, the fortress was ruined during the war with Prussia. Nijmegen suffered much damage in World War II – almost all buildings were ruined in 1944 after the liberation operation of the British and American forces. Modern Nijmegen has a new face. Unfortunately, many old buildings were ruined beyond repair. Copyright www.orangesmile.com
Do you like cycling? Many people know how to cycle, and some people cannot imagine a day spent without their “two-wheeled friend”, but not everyone knows about the history of the bicycle. In Nijmegen, guests of this city can visit an interesting museum dedicated the bicycle. The collection of the Velorama is astonishingly large and diverse. The museum was founded in 1981, and its collection has significantly grown in size since then. New models of bicycles are added to the Velorama on a regular basis. 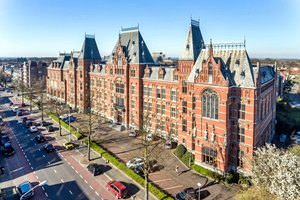 The collection is so big that it occupies the whole three floors of the museum’s building. On every floor, there are bicycles of different designs and historic periods. Visitors can see the unusual and clumsy bicycles of the past, slowly moving to more modern and sophisticated models. The excursion ends near the latest bicycle styles, and it is easy to notice how sleek and polished the modern models are. In total, there are approximately five hundred different bicycles in the collection. This number is not fixed as new models are being constantly added to the exhibition of the museum.
Valkhof Park is one more notable attraction of Nijmegen. Initially, there was a Roman military camp on the site of the modern park. Later, Charlemagne’s castle stood here. As it is not hard to guess, both the formations haven’t survived to this day. The old chapel dedicated to Saint Nicolas is the only historic building in the park. This old stone chapel also had to endure different troubles over the centuries. The chapel was turned into a warehouse at some period of time. During the French Revolution, the ruler had to escape to Valkhof Palace. When Napoleon and his army entered the city, they almost completely ruined the stone building. 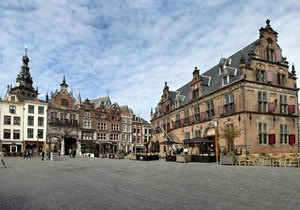 The city administration didn’t have enough money to restore the old castle, and so it was decided to completely demolish the building. Only two chapels dedicated to Saints Nicolas and Martin were saved. To immortalize this place, the ground level was raised in the area. Later, at the beginning of the 19th century, famous Dutch garden architect Johan David Zocher came up with an idea to make a picturesque park in the area that is so important for the heritage of Nijmegen. Local authorities decided to build a precise copy of a tower in 2005, but the construction works haven’t ended until now.
Weeze Airport, which is located in Germany, is the closest airport to Nijmegen. It receives flights from numerous German cities such as Dusseldorf. To get to Nijmegen from Weeze, tourists need to get on a bus going in the right direction. The journey time is approximately one hour and twenty-five minutes. Eindhoven Airport is situated sixty kilometers from Nijmegen. Travelers can reach Nijmegen from Eindhoven by train, and it will take one and a half hours to get to the final destination in this case. When traveling from other cities in the Netherlands, the train is also the most comfortable means of transport.
This guide to iconic landmarks and sights of Nijmegen is protected by the copyright law. You can re-publish this content with mandatory attribution: direct and active hyperlink to www.orangesmile.com.

City tours, excursions and tickets in Nijmegen and surroundings

Survived castles around Nijmegen
♥   Castle 'Doornenburg Castle' , 14.4 km from the center. On the map

National and city parks around Nijmegen
♥   National Park 'Veluwezoom' , 28.7 km from the center. On the map

Art galleries in Nijmegen and around
♥   Art museum 'Kröller-Müller Museum' Otterlo, 31.5 km from the center. On the map

Sights around Nijmegen from our guide 'Extreme places on Earth' 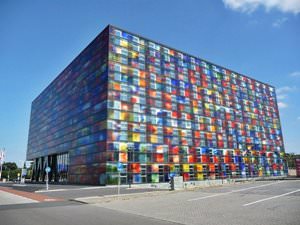 Distance from Nijmegen center - 65.4 km.
In the great beautiful building has also placed offices and conference halls. The last floor is used by the Museum of Mass Media, which is open for all guests of the city. The 54th meters façade was decorated within three years. The façade has 2 100 vivid panels. Inside the building has a lot of unusual glass elements. The building has marvellous glass staircases, glass partitions that separated large area. At night Netherlands Institute for Sound and Vision looks amazing. … Read further

Distance from Nijmegen center - 57.6 km.
For the guests who like the breathtaking and active entertainments, there are more than 30 attractions, including 5 roller coasters. The interesting attractions can also be found in the 'house with the ghosts'. The realistic attraction 'the Land of Dreams' will please the small park guests. As a legend tells, Walt Disney visited the Efteling Park shortly after the opening. The magical atmosphere of the park has inspired him to found Disneyland. … Read further

Search touristic sites on the map of Nijmegen

Sightseeing in regions nearby Nijmegen

Arnhem
Koepelchurch is one of the most attractive and popular sights in Arnhem. The church was built in the 13th century by the representatives of St. John order. Saint Peters Guesthouse mint place is located just nearby. Also don’t forget to visit Grote Markt, where you can see two wonderful buildings. One of them is a mysterious and a gloomy building named Duivelshuis or ... Open »
Den Bosch
Den Bosch is the most beautiful town and the capital of North Brabant province in the southern part of the Netherlands. The town was founded in the end of the 12th century between the mouths of two small rivers Aa and Dommel on the basis of former hunting holdings of Brabant Duke. The name of the town comes from this fact as it can be translated as “the Duke’s Wood”. ... Open »
Limburg
Among religious sites, the Church of San Servacio is notable; it is the oldest basilica in the Netherlands, which was founded in the 6th century. The building, which can be seen today, was built in the 11th - 12th centuries. Connoisseurs of architecture say that it features Roman style. No less remarkable is the Church of St. John adorned with the 75-meter-high bell tower. The ... Open »
Apeldoorn
The Apenheul Zoo was opened in 1971 and quickly became popular among visitors. This zoo is particularly famous for having over 30 breeds of monkeys. Moreover, all monkeys can move freely on whole territory of the zoo. The animals are absolutely not afraid of people and are very friendly. If you like religious buildings, you should visit Protestant Church that suffered ... Open »
Eindhoven
The town has not yet become the center of international tourism, but those visitors, who have been lucky enough to spend at least few memorable days here, will keep the memory of this amazing corner of Europe in their hearts. It feels like time has no power here over the calm lifestyle of the inhabitants of this northern province. Quiet walks through the streets of the town ... Open »
Amersfoort
A huge stone is considered one of the most notable sights of Amersfoort. An interesting legend is connected with this stone. In 1661 locals made a dispute, according to which they were obliged to drag a huge stone to the center of the city. Over 4 hundreds of people were participating in this dispute and so they managed to deliver the stone to Amersfoort. The stone was ... Open »

All about Nijmegen, Netherlands - sightseeings, attractions, touristic spots, architecture, history, culture and cuisine. Prepare your trip together with OrangeSmile.com - find out the 'must see' things in Nijmegen, which places to visit, which excursions to take, where the breathtaking views are waiting for you. Planning your trip with this travel guide will help your to get the most out of Nijmegen in few days.