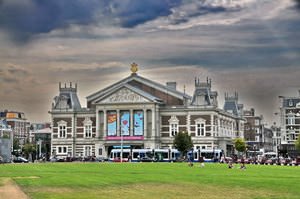 occupies 25 historic houses on a classical Dutch street along a canal. These buildings were constructed in the 17th – 18th centuries, and after restoration they were merged into one hotel. Luckily, the houses are still furnished with old classical Dutch items, but that doesn’t mean the hotel is inconvenient as together with its antique design it offers all modern services and amenities. The hotel has 230 guestrooms, each of which has its own style and represents a part of Dutch history and culture. Having kept the original heavy wooden beams, designers succeeded in retaining historic atmosphere of this place. The hotel has an adjusting garden, inside which guests will find an open picture gallery. A private quay with boats is another advantage of this hotel as guests can use the boats and make an excursion ride on canals.
Check the hotel prices and availability
NH Barbizon Palace
Check on the map. From Amsterdam center - 0.6 km
The historic centre of Amsterdam has become home to NH Barbizon Palace

that occupies 19 houses, the majority of which were built in the 17th century. After a full restoration it has become one of the most famous hotels in the city. This luxurious complex is connected to a 15th century chapel by a system of underground passages. Nowadays, the chapel is used as event space and includes 11 conference halls. The design of the hotel’s lobby is simply magnificent – marble columns, balconies, a posh staircase and oak wooden beams emphasize traditional Dutch style. Elegant modern furniture only adds luxury to this grandiose hotel. Travellers are recommended not to forget to visit the famous Vermeer restaurant, in which dishes are served in historic atmosphere of the 17th century.
Check the hotel prices and availability
Copyright www.orangesmile.com
ZSeven Bridges Hotel is surrounded by the most beautiful canals and historic buildings of the city. The hotel is open in a historic building constructed more than 300 years ago. The hotel has only 11 guestrooms of luxury level. Owners of the hotel decided to keep the antique furniture left from people, who lived in the house centuries ago. Old buffets, hand-made and carved tables and beds, oriental carpets and fine antique items in baroque style make this hotel stand out from the list of exclusive hotels in Amsterdam. Naturally, such individuality and atmosphere of antiquity attract many travelers from all over the world. Breakfasts at this hotel are served in fine china directly in guestrooms.
Top places to stay in Amsterdam - most luxurious hotels
Luxurious and modern Dylan Hotel is located in a restored building of a former theatre. The hotel includes 33 standard guestrooms and 8 suites. As the guestrooms are located on top of the …

. The opening of this historic hotel took place yet in 1900. Its design is an amazing combination of art deco and modern designer elements. The historic building of the hotel still has the original design in some of its premises. Besides antique furniture, there are a large collection of old black-and-white photographs, paintings of famous European artists and other antiquities that remind of the culture of the beginning of the 20th century.
Dikker en Thijs Fenice Hotel Check on the map. From Amsterdam center - 1.1 km
The central part of the city is the location of another prestigious hotel, Dikker en Thijs Fenice Hotel

. This hotel is open in one of the most beautiful historic buildings of Amsterdam. Constructed yet in the 18th century, many years ago the building of the hotel was used as a warehouse of De Prins Company. All guestrooms of the hotel are designed in accordance with traditions of the past, and some guestrooms still have the original wooden beams. Inside the rooms, guests will find massive wooden furniture and elegant tapestries.
Check the hotel prices and availability
Park Plaza Victoria Amsterdam is located right opposite the central railway station. This hotel is designed in the style of the 50s of the previous century. Travellers will find here spacious rooms with high ceilings, walls decorated with vintage wallpapers and interesting paintings in massive wooden frames. All guestrooms feature original wooden furniture. Public zones are no less beautiful and deserve separate attention. The hotel is located in a historic building, so its public zones are truly fascinating with their high rise columns, archways and wooden decor elements.
Check the hotel prices and availability

Ancient hotels in the neighbouring cities of Amsterdam

The Hague
t Goude Hooft enjoys a premium location in one of the most beautiful historic buildings in The Hague. The hotel offers only 8 unique rooms for its guests. Despite the fact that modern designers worked over the look of the hotel, they managed to keep the original atmosphere and make the rooms in accordance with the most beautiful historic traditions. The guest rooms are mostly ... Open »
Delft
Hotel Johannes Vermeer Delft remains one of the most famous and interesting historic hotels in Delft. It is located in the heart of the city, where the hotel occupies a beautiful old building that was previously a tobacco factory. Designers of the historic hotel tried to keep the original architecture of the building as much as possible and added beautiful antique furniture and ... Open »
Rotterdam
Hotel New York is a true historic symbol of Rotterdam. It is open in a beautiful old building that is former Holland America headquarters. The design of the building is made in a modern style and looks spectacular thanks to unusual vintage decorations. Such elements of the design as fabulous wallpapers in retro style, interesting black-and-white photographs, antique furniture, ... Open »
Apeldoorn
Fans of rural getaway are sure to enjoy Landgoed Sollewerf hotel situated in the Veluwe National Park. It resembles an old hunting lodge. There are three charming rooms decorated in white tones and arranged with elegant old-style furniture. Travelers visiting the hotel in warmer months will be able to relax on the shore of the pond enjoying lovely terraces and wooden hot tubs. ... Open »
Antwerpen
Boutique hotel Hotel T Sandt is also very popular with travellers, who enjoy staying in historic places. Guestrooms of this unforgettable hotel have a very interesting concept of combining antique items with modern designer elements. Some guestrooms have the original wooden beams and windows. Public zones are decorated with marble, wooden ladders with carved banisters and old ... Open »
Groningen
The B&B De Oude Nadorst is another establishment that is unique in many respects. This hotel was founded on the territory of an old farm. It offers its customers two special rooms; one was equipped in a historic building, while the other was set up in a renovated old van. The rooms were decorated with beautiful vintage accessories, interesting wood decorations, and antique ... Open »
OrangeSmile.com - online travel reservation expert providing reliable car rental and hotel booking services. We feature more than 25.000 destinations with 12.000 rental offices and 200.000 hotels worldwide.
Secure Server