Sightseeing in Groningen - what to see. Complete travel guide 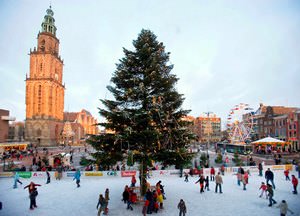 Groningen is one of the towns of the Netherlands that is famous for its long history and respected culture. This town is not a big one, so it perfectly fits tourists who seek unhurried rest, want to enjoy beauty of nature, ride a canoe or a catamaran on water canals that cross and round Groningen is different directions. Martini Tower is the main architectural site of the town and stands in Groningen for over 500 years. The tower is a part of the old church of St. Martin. Inside the tower are stored unique frescos created in XIII. Here also stands the biggest organ of Northern Europe decorated in the Baroque style. There are several old churches in Groningen - Nieuwe Kerk and Aa Kerk.
Groningen design-hotels for stylish travellers
Groningen is famous for its unique design hotels and the Hotel Miss Blanche Suites & Apartments is a notable example. It is housed in one of the outstanding historical building that is …

Open
Groningen is also a university town, so at least one fourth of its population is students. There are always many young people in this town and this is the reason for multiple cafes, pubs and nights clubs that can be found here. Live never stops at Groningen. The town is also famous for its festivals. Noorderliht is the festival of photography that often exhibits real masterpieces and photos with deep meanings; Noorderslag is the festival devoted to Dutch pop music, which is also famous by performances of amateur theatres and festival of blues music. While taking a walk on silent Groningen, devote some time to visiting a wonderful park Lauwersmeer or attend the Museum of Groningen and an original Museum of Tobacco. Children will definitely enjoy visiting a cattle farm, the local Museum of History and Museum of Comics.
The most beautiful architectural monument in the neoclassicism style is the City Hall building. Its construction began in the late 18th century and was completed in the year 1810. Like many years ago, today in this building there are sessions of city council. The spectacular building with columns is one of the most photographed in the city. In front of it, there is a spacious square, where interesting entertaining events often take place. Copyright www.orangesmile.com
Old hotels keeping the history of Groningen
For connoisseurs of traditions of past years, Groningen is home to several wonderful hotels with historical settings. The luxury Hotel Schimmelpenninck Huys located in the central area is …

Open
The city has one of the oldest universities in the world. In 2014, it celebrated its 400th anniversary. The historical building of the university with huge windows and a richly decorated facade amazes with its luxury. Around the building is a very beautiful garden. About 28,000 people are constantly educated at this university, and about 5,000 people work there. 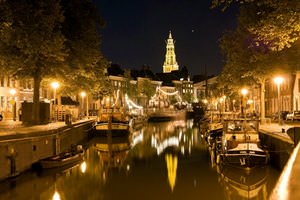 In the immediate vicinity of Groningen, there is a unique historical monument – Fort Bourtange. This majestic fortress was founded in 1593 and has a very unusual architectural form. The fort is built in the form of a star. Today, it houses an interesting historical museum. Several years ago, a major reconstruction of the fort was completed, during which not only the old buildings were rebuilt, but also the adjacent territory. As in the Middle Ages, today the fortress is surrounded by deep moats filled with water. It can be approached only by special bridges.
Best hotel choice for romantic escape, wedding or honeymoon in Groningen
Couples who have long dreamed of spending their holidays in an unusual romantic setting should pay attention to the original hotel, Klipper Zwadde. It was set up on a beautiful sailing ship, …

Open
A symbolic building for the city is the Goundkantoor, one of the oldest and most spectacular buildings in the city. The beautiful mansion was built in 1635. Originally, it housed an institution in which taxes were collected. In the 19th century, the so-called Assay Chamber was located here, in which the quality of precious metals was assessed, and samples were also placed on them. It was during this period that the beautiful building was fixed with the unusual name. Today in the Goundkantoor is a popular restaurant of national cuisine. 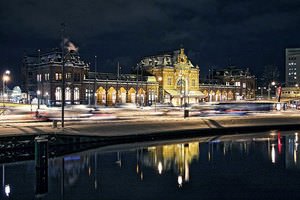 This guide to iconic landmarks and sights of Groningen is protected by the copyright law. You can re-publish this content with mandatory attribution: direct and active hyperlink to www.orangesmile.com.
Groningen - guide chapters 1 2 3 4 5 6 7 8 9 10 11

Art galleries in Groningen and around
♥   Art museum 'Groninger Museum' Groningen, 1.2 km from the center. On the map

Sights around Groningen from our guide 'Extreme places on Earth' 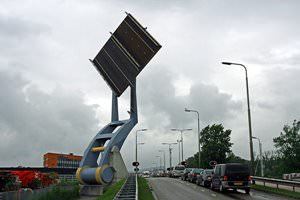 Distance from Groningen center - 50 km.
The locals call the ultramodern and fast Slauerhoff a 'flying' bridge. When lifted, the bridge platform hangs above the nearby autostrada. With regard to such a complicated location, it is very important that the bridge be quickly lifted and lowered so as not to interfere with ship and car traffic. Along the Autostraße is the large footpath. This is an ideal place to look at Slauerhoff Bridge and to make the beautiful photos on their background. … Read further 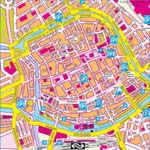 Search touristic sites on the map of Groningen

Sightseeing in regions nearby Groningen

Leeuwarden
Leeuwarden is a town in Holland. It is also the administrative center of Friesland province. The population of the town estimated 88.7 thousands of people in 1970. Leeuwarden is an important crossing of railway lines and channels. In this place are well-developed such industries as metal processing and food (mostly milk) industry. In Leeuwarden is also located the University ... Open »
Zwolle
The largest city of Overijssel province, Zwolle is located on the bank of the River Ijssel. The province is widely known as a large farming region, so here you will find spacious fields, lakes and forests. However, Zwolle is a modern city with numerous beautiful buildings, monuments and hotels. Tourists, who visit Zwolle for the first time, are usually amazed by the contrast ... Open »
Oldenburg
Some people call Oldenburg “the city of parks” due to the large number of green zones. It is really difficult to imagine that this picturesque city is one of the largest industrial centers of the country. Several centuries ago here appeared first tobacco factories; later foundry and machine-building factories, glass and leather manufactures were built on the territory of ... Open »
Enschede
The fate of this city is quite tragic. Because of this, the residents of Enschede have even received a sarcastic nickname “fire-raiser” (Brandstichters) from their countrymen. Indeed, three global fires destroyed this city in 1517, 1750 and 1862. This fact explains why there are just a few medieval buildings with stone and wooden architecture here. For a long time ... Open »
Gronau
The city has preserved several beautiful old churches, one of the most spectacular and attractive ones is the Church of St. Anthony. This majestic church was built in the early Middle Ages as a spectacular Gothic-style monument. This church has preserved its beautiful interior decoration. Like many years ago, now it hosts the most important religious ceremonies. Another ... Open »
Almere-Stad
This modern Dutch city is located not far away from Amsterdam. There are four main regions in Almere – Almere Stad and Almere Haven, which were built yet in the 90s; Almere Buiten Zuid that was built 10 years later, and Almere Buiten Nord, which is currently under construction. The city is full of new buildings and a huge part of them is dedicated to hotels and tourist ... Open »

All about Groningen, Netherlands - sightseeings, attractions, touristic spots, architecture, history, culture and cuisine. Prepare your trip together with OrangeSmile.com - find out the 'must see' things in Groningen, which places to visit, which excursions to take, where the breathtaking views are waiting for you. Planning your trip with this travel guide will help your to get the most out of Groningen in few days.