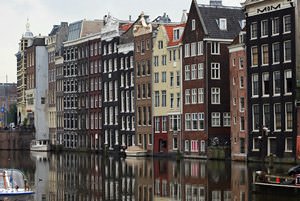 is located in a heritage building that belongs to the Victorian period. The story of this site started yet in 1492, when a fortress was built there. Approximately 140 years later the fortress was demolished and a tavern with guest house were built instead. Only 200 years later famous architect Willem Hamer rebuilt this building made of rock stones and red bricks, completing the design that has survived till our days. The hotel is often called “the second royal palace of Amsterdam”. It belongs to the richest family of the Netherlands – Heineken – and is considered the most luxurious hotel in the city. Just like in a museum, halls of the hotel are decorated with paintings of Dutch artists. These paintings belong to the personal collection of Alfred Heineken. The new wing of the hotel, Dutch Masters Wing, exhibits exact copies of masterpieces that can be seen in the Rijksmuseum. Travellers, who want something special, can book the luxurious Signature Suite with six bedrooms. The legendary hotel has always been a choice of the wealthy and celebrities from all over the world.
Hilton Amsterdam
Check on the map. From Amsterdam center - 11.9 km
Hilton Amsterdam

is a great choice for business travelers. This hotel is located near a canal and has its own quay, a spacious open terrace and a charming roofed terrace that is heated by a fireplace. That cozy terrace is a wonderful place to spend a rainy evening while enjoying your favorite drinks. In 1969, John Lennon and Yoko Ono stayed at this hotel. Travellers are welcome to book spacious guestrooms designed in Dutch style with all amenities needed for comfortable stay. Breakfasts and dinners are served at award winning Roberto’s restaurant that offers delicious Italian cuisine.
Check the hotel prices and availability
Copyright www.orangesmile.com
Sofitel Legend The Grand Amsterdam Check on the map. From Amsterdam center - 0.2 km
The next hotel, Sofitel Legend The Grand Amsterdam

is open in a historic building that was constructed yet in the 15th century and is currently known as a protected site. Initially, the building was used as a monastery and later it was transformed into a municipality. The hotel offers guestrooms of different categories, with historic suites named after different royal guests being the most interesting ones. In different times such noble people as Wilhelm V, Maria de Medici and Willem van Oranje stayed in those suites. In 1969 the hotel hosted the wedding ceremony of Beatrix, Queen of the Netherlands. There are also three Presidential suites in the hotel that are named after former mayors of Amsterdam – Ann Thane, Wim Polak and Ivo Samkalden. The suites were open during a special event in 1992, and all the mayors were present at it. The hotel is proud of its historic past and tries to maintain its highest standards of hospitality, creating pleasant atmosphere for its guests who may feel like royals in this wonderful place.
Check the hotel prices and availability
Authentic traditions, festivals and lifestyle of Amsterdam inhabitants
Residents of Amsterdam have always been famous for honesty and sincerity, as well as thrift (this concerns many issues, for example, respect to environment). A rich man here will never show …

has become a true historic landmark of the city. It is located on the bank of Herengracht Canal that is included in UNESCO World Heritage Site list. The hotel occupies a complex of six unique palaces that date back to the 17th century. The luxurious historic hotel includes 90 guestrooms, each of which is decorated in an unforgettable style with the use of real antiquities. Besides posh interior and rich history, the hotel is famous for its fine cuisine restaurant Librije's Zusje Amsterdam that is awarded with two Michelin stars.
INK Hotel Amsterdam
Check on the map. From Amsterdam center - 0.3 km
One more wonderful and prestigious hotel, INK Hotel Amsterdam

is located in a historic building that was the headquarters of De Tijid newspaper around a century ago. Original design is one of the biggest attraction points of the hotel. Thanks to it the hotel won several prestigious awards. The space, which had been once used as a press centre of the newspaper, was transformed into the stylish Pressroom bar. The spacious lounge zone of the hotel is decorated with old issues of the newspaper that date back to 1904. The latest renovation was finished in 2015 at the hotel and it attracted best architects and designers from Europe.

Search hotels in Amsterdam for your taste

Famous hotels in the region of Amsterdam

Brugge
The former residence of baroness de Geiy is now known as Hotel Jan Brito. The building of the hotel is protected by UNESCO, so all restorations were very thoughtful and their main aim was to keep the original design and look of the building. Travelers are welcome to admire the beauty of antique marble fireplaces, paintings and the oak ladder. Guestrooms feature the style of ... Open »
Cologne
One of the oldest and most famous hotels in Germany, Dom Hotel Koeln, starts its history in 1857. The hotel has always been a traditional place to stay for aristocrats, manufacturers and rich merchants. The history of Dom Hotel Koeln was full of difficulties as it was reconstructed many times, but the challenges couldn’t prevent the hotel from keeping its original atmosphere ... Open »
London
The Savoy is a true legend of London. This is one of the most prestigious and expensive hotels in the world. The opening took place in 1889, and just 10 years later the hotel already was a landmark of the international level. Right from its opening, the hotel was getting the most up-to-date innovations of that time. The Savoy was the first hotel in the country to use electrical ... Open »
Paris
The history of the hotel is no less interesting. Ritz Paris was founded by Caesar Ritz. In 1898, the tycoon decided to turn the magnificent building of an old bank on Place Vendôme into a posh hotel. Virtually right from the opening, Ritz Paris became one of the most popular and innovative hotels in the French capital. It was one of the first hotels in the world to offer guest ... Open »
Copenhagen
In 1787, a warehouse for the purpose of keeping grain was built in the city. The building was fully restored in 1978, and Admiral Hotel was open in it. The building still features wooden beams made of a two hundred year old pine, while brick walls and arched passages remind of the respectable age of the building. The hotel’s interior was carefully developed and so all ... Open »
Geneva
Business travelers and tourists who cannot stay in Geneva for a long time often recommend Holiday Inn Express Geneva Airport that is located close to Cointrin Airport. The stylish hotel is open in a modern high-rise building, where guests will find everything needed for comfortable rest in a home-like setting. Every guest room has a premium bathroom made in shades of white, a ... Open »
OrangeSmile.com - online travel reservation expert providing reliable car rental and hotel booking services. We feature more than 25.000 destinations with 12.000 rental offices and 200.000 hotels worldwide.
Secure Server