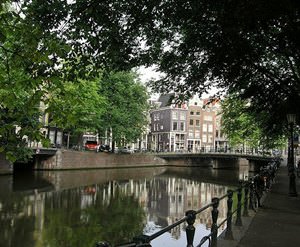 was made by Renny Ramakers, head of famous boutique shop and show room. The hotel is located in the centre of Amsterdam close to Waterloo Square. This is a very unusual hotel that looks nothing like ordinary hotels we all know. Its design was developed by Droog studio that specializes on avant-garde projects. The area of 700 sq. metres has become home to several shops, exhibitions and a beauty salon, all of which can be freely visited by guests of the hotel. Travellers are also welcome to rest in a wonderful garden that was created by French designers Claude Pasquer and Corinne Dtroyat.
Hotel Filosof is a thematic hotel in the central district of Amsterdam. Conveniently located on a calm street not far away from Vondelpark, the hotel occupies several buildings constructed in the 19th century. It has only 38 guestrooms, each of which is dedicated to one great philosopher – Aristotle, Spinoza, Nietzsche, Karl Marx, Confucius and others. All the guestrooms are furnished with awesome elegance and reflex the main idea of the hotel. There are books and busts of famous scientists on shelves, and walls are decorated with paintings and quotes of great philosophers. Copyright www.orangesmile.com
Qbic Hotel WTC
Check on the map. From Amsterdam center - 3.9 km
The next hotel that is worth mentioning is Qbic Hotel WTC

, which was recently open in the building of World Trading Centre. Guestrooms of this hotel were developed and furnished by Dutch designers, who were inspired by the idea of a capsule hotel. In such a hotel, not much is needed for convenient rest. All guestrooms come with comfortable beds, a work desk and a shower. Every guestroom has a stylish lightning system that adds futurism to the design and makes guestrooms look like a spacecraft’s cabin. This hotel attracts travellers with its relatively low prices together with high level of comfort. There is no better proof of popularity than occupancy, and guestrooms at this hotel need to be booked in advance as during its first year of work the occupancy reached 99%.
Check the hotel prices and availability
Shopping in Amsterdam - main shopping streets, outlets and boutiques
Amsterdam is always in the top list of the most popular cities for fans of shopping. Shopaholics arrive to the city from different parts of the world in order to buy unique clothes made of …

Open
Faralda Crane
Check on the map. From Amsterdam center - 2.9 km
One more unique hotel can be found in the northern part of the IJ Bay. This is Faralda Crane

that is located on the territory of a former dock yard. The hotel is located in quite an original place – an old dockside crane that previously belonged to NDSM Company. Nowadays, the rebuilt crane has become home to a local TV studio and a unique hotel with only three luxurious guestrooms made in fantasy style. Guests of the hotel can select guestrooms located at the height of 35, 40 or 45 metres. All the guestrooms feature magnificent panoramic views of the area. The hotel has become very popular with couples. The roof of the crane was rebuilt into a spacious terrace with Jacuzzi. Such an original hotel will also be liked by fans of bungee jumping.
Hotel de Windketel
Check on the map. From Amsterdam center - 2.1 km
Travellers, who prefer to stay in unusual places, will simply fall in love with Hotel de Windketel

. This hotel is located in an old water tower that was saved only thanks to efforts of local people. The hotel is located not far away from an old gas factory. Currently, this factory is a part of Westergasfabriek. The small octagonal water tower was built yet in 1897. With time, the tower was not used for its original purpose anymore and was on the verge of destruction. Several local people, who lived in neighbor houses, decided to save the historic building and open an original designer made guestroom in the tower. The guestroom has everything needed for comfortable long-term stay in Amsterdam – a cozy bedroom, well-equipped kitchen and living room, and the ground level of the water tower was turned into a dining room.

Search for authentic hotels in Amsterdam

Unordinary city break in the neighbours of Amsterdam

Alkmaar
Alkmaar has several unique hotels, and there won’t be equal in any other city in the world. One of these hotels is Bed & Breakfast Prins Hendrik occupying an old cheese farm built in 1904. Today, this small hotel offers customers seven rooms designed in romantic style. The hotel is great for countryside vacations. Its well-kept garden is equipped with picnic areas. Another ... Open »
The Hague
Court Garden Hotel – Ecodesigned, which is located not far from the peace Palace, has one doubtless advantage – it’s an eco-friendly hotel. It will be a perfect choice for fans of a healthy lifestyle and for travelers who love nature. Only best natural materials were used in the design of the Court Garden. The majority of rooms is white and is decorated with colorful ... Open »
Rotterdam
Unusual floating hotels have become one of signature features of Rotterdam. The high-class ss Rotterdam Hotel en Restaurants is open in an old Dutch-American ship. Besides fabulous cabin guest rooms, the hotel has two excellent restaurants. The design of the floating hotel is made in the style of the 50s of the previous century. All guest rooms have elegant furniture with ... Open »
Arnhem
Arnhem is not so big, but it has several unique hotels, and you won't find anything alike in any other city in the world. A wonderful Houseboat Gaudi aan de Rijn is set on the banks of the Rhine. The hotel occupies a unique building in style of Gaudi. This accommodation place offers two spacious rooms with amazing design. Each room has lovely picture windows with panoramic ... Open »
Antwerpen
Belgian fans of art Geert and Carla Verbeke-Lens opened a very unusual hotel that can hardly be found anywhere else in the world. Originally CasAnus was just a sculpture made by Dutch designer Joep van Lieshout. The sculpture is made in the shape of rectum and ends with anus. Nowadays, the sculpture is located in the park of sculptures in Antwerp. There is one guestroom in the ... Open »
Brugge
There are many interesting and peculiar hotels in Bruges. They will be certainly liked by travelers who want to organize a truly unforgettable vacation. Located not far away from the Market Square, Hotel Fevery occupies a beautiful historic building. For many years this hotel has been run by the same family. An important fact – Hotel Fevery is an environment conscious hotel. ... Open »
OrangeSmile.com - online travel reservation expert providing reliable car rental and hotel booking services. We feature more than 25.000 destinations with 12.000 rental offices and 200.000 hotels worldwide.
Secure Server