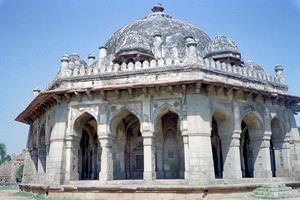 This review is a great opportunity to look at architectural landmarks of New Delhi from a new perspective – namely, from the sky. Click the video to enjoy a 3D flight over the architectural ensemble of New Delhi and to look at the most interesting landmarks in detail - at Jama Masjid, Humayun Tomb, Qutb Minar, Parliament House, Jawaharlal Nehru Stadium and many others. Below you will find the most amusing historic facts and professional photographs of every famous sightseeing in New Delhi. 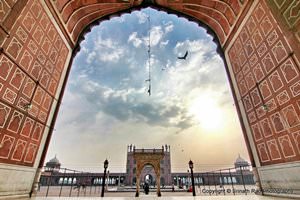 Facts:
» The Jama Masjid in Delhi was founded by Shah Jahan in 1650-1656. Upon his order, the Taj Mahal, the mausoleum of his wife, was also built.
»  The Jama Masjid is one of the largest mosques in the world. Its courtyard can accommodate up to 25 000 believers. The mosque was built by 5 000 builders.
»  Some time later, it was ordered to destroy it. A new mosque started to be built in 1775. The construction lasted until 1802.
»  In the temple, the historical relic - the Quran written on deerskin - is kept.
»  Everyone can enter the minaret that has a view of the entire city for a fee.
»  In April 2006, during the Muslim holiday, two bursts occurred in the mosque. 13 people were injured. However, the mosque was not damaged. 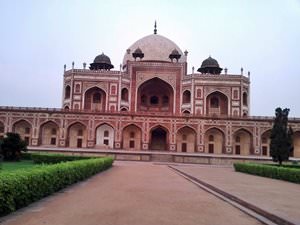 Facts:
» Humayun's tomb was built 14 years after his death. The Emperor died as a result of the accident when he fell down the stairs.
»  The wife of Humayun ordered to build a mausoleum. The construction lasted 8 years and was completed in 1570. This grand tomb consists of several constructions surrounded by the Char Bagh Gardens.
»  The grace of Humayun is under the main hall of the mausoleum. In the hall itself, visitors can see a cenotaph (sarcophagus). Near it, there are marble sarcophagi of Humayun’s wives.
»  In the territory of the tomb, about 150 people who were close to Emperors were buried. Bahadur Shah, the last Mongolian emperor, was captured by Englishmen.
»  The construction was renovated in the period between 1999 and 2003. Humayun’s tomb is the first mausoleum in India. It is a UNESCO World Cultural Heritage site. 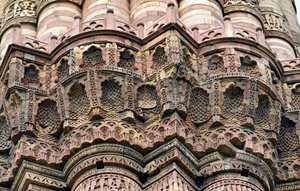 Facts:
» The Qutb Minar is one of the mosques built in the territory of the complex of historic buildings. It is considered as the highest mosque in the world.
»  It started to be built in 1193. The construction lasted 175 years. The last fifth tier was finished in 1368.
»  The mosque is 73 m. The brick construction is decorated with beautiful delicate carving.
»  The mosque stood the test of time and even several strong earthquakes. In 1993, the Qutb Minar was taken under UNESCO protection.
»  Near the tower of the mosque, there is another interesting construction. This is a 7-meter column molded of iron 4 centuries ago. It is unique because it doesn’t rust. There is a hypothesis that the column was molded of cosmic iron. 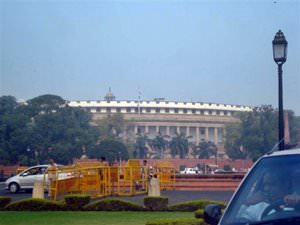 Facts:
» The Parliament House was built by English architects Edwin Lutyens and Herbert Baker in 1911. It is the most extraordinary Parliament building in the world.
»  It is a round construction surrounded by columns. The roof of the building is supported by 144 columns. If you circle the Parliament House, you will cover 1 km.
»  The Parliament House started functioning in 1927.
»  In the center of the construction, there is a big round conference hall with a domed ceiling and walls faced with wooden panels.
»  Remarkably, men putting costumes of langurs were invited to protect the building from monkeys. Workers produced creepy sounds to keep these arrogant beasts away.
»  In 2001, a terrorist group broke into the Parliament House. Terrorists were struck down but seven people were murdered. 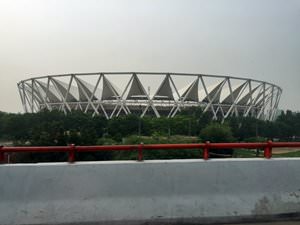 Facts:
» Jawaharlal Nehru Stadium is a big stadium for football matches, other sports competitions, and concerts in Dehli.
»  The stadium can accommodate up to 60 000 visitors. During festive events, it accommodates 100 000 spectators.
»  It is the headquarters of the Indian Olympic Association that presents the country in the Olympic Games. The sports stadium was opened in 1982.
»  It was named after the Prime Minister of independent India Jawaharlal Nehru. Here, football teams, cricket players, and athletes train. Basketball, volleyball, and table tennis competitions are held on the other playground.
»  The field is 106x68 m. The sports stadium was reconstructed by the 19th Commonwealth Games. The renovation lasted 3 years. A canopy was added. For these games, a swimming pool was constructed. It cost $85 million.
»  Jawaharlal Nehru Stadium is depicted on a postage stamp. You can enter its territory only during competitions or festive events. At other times, the stadium is not open to the public.

Facts: » The Cathedral Church of the Redemption is a reminder of British rule. It was founded by Anglican missionaries preaching the gospel. The church was built in 1862, in the colonial epoch.
»  The building is decorated with dark scarlet stone. The color gradually changes and creates a gradient going from the roof and reaching triangular porticoes under the base of the bell tower.
»  The church is located near the Parliament House in the central district of Dehli. The church fits harmoniously into the space composition of other buildings.
»  The outer walls are painted red. With it, the church symbolizes the blood of Christian martyrs. They were citizens dying during the Sepoy Rebellion when Indian soldiers rose against the English colonial policy.
»  The luxurious interior of the church decorated with paintings and carved figurines has been preserved. The walls are stained glass. Everything looks quite modest. It is always cool inside.
»  The Cathedral Church of the Redemption in New Dehli (India) has been well preserved. There is a natural grass lawn around the church. The doors of the church are always open to visitors.

CONTINUE - PART II »»
This guide to architectural sightseeing in New Delhi is protected by the copyright law. You can re-publish this content with mandatory attribution: direct and active hyperlink to www.orangesmile.com.
New Delhi - guide chapters 1 2 3 4 5 6 7 8 9 10 11

Build your walking routes in New Delhi on the landmark map 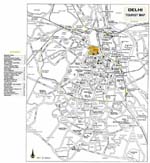 Architectural landmarks in the regions around New Delhi

Bombay
Queen Victoria ordered to build the court building in 1862 as an institution of supreme authority. 75 officials can simultaneously conduct trials at the court. More than 300,000 cases were conducted during the time of its existence. The exterior of the building resembles a European medieval castle. The only difference is that it’s surrounded by palm trees. It’s an elongated square that is 171 metres long. High walls prop a pyramidal roof. ... Open »
Dubai
Burj Khalifa is 828 m skyscraper in Dubai, the tallest building in the world. The building has 163 floors, and its shape resembles a stalagmite. Burj Khalifa was designed as the city within the city. The total cost of construction is about $1.5 billion. The building houses a hotel, apartments, offices and shopping centers. Burj Khalifa has three entrances: the entrance to the hotel, the entrance to the apartment and the entrance to the offices. ... Open »
Abu Dhabi
The mosque accepts all visitors on condition that they don’t touch anything with their hands. It can hold up to 9,000 Muslims. The huge chandelier is listed in Guinness World Records. It’s made of Swarovski crystals and weighs 13 tons! The diameter of the chandelier is 10 metres, and the height is 15 metres. A handmade carpet that is 15,000 square metres and weighs 45 tons catches the eye. It’s placed in the main prayer hall. About ... Open »
Bangkok
The Grand Palace is the Bangkok's most famous landmark. The palace consists of several buildings, occupying an area of 218 thousand m2 and is surrounded by four walls of 2 km long. The Grand Palace served as the residence of the Kings of Thailand. Its construction began during the reign of King Rama I in 1782. There are various government offices, temples and the Royal Library in the palace. In addition, many galleries of the palace are ... Open »
Hanoi
The Hanoi Cathedral of St. Joseph was built in 1886 on the site of a very ancient and ruined Buddhist pagoda. The the vicar of the church, Paul Francois Puginiier, petitioned the construction of the Catholic church in front of the French administration. The cathedral was built in two years. It resembles the French Cathedral of Our Lady of Paris. Two bell-towers 31 m high are equipped with five bells each. A very beautiful interior is ... Open »
OrangeSmile.com - online travel reservation expert providing reliable car rental and hotel booking services. We feature more than 25.000 destinations with 12.000 rental offices and 200.000 hotels worldwide.
Secure Server