Sightseeing in Bangalore - what to see. Complete travel guide 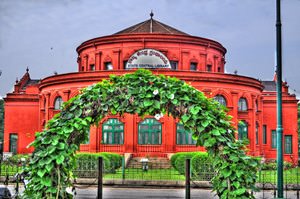 “India’s Silicon Valley” – this name is often used when describing Bangalore. The city got this name because of large number of modern plants located on its territory. However, tourists keep visiting this city not because of industrial development of this region, but because of large number of historical and architectural monuments that can be found here.
Top places to stay in Bangalore - most luxurious hotels
Bangalore has no shortage of luxury hotels. A luxury lodge The Ritz - Carlton, Bangalore is near Cubbon Park. Customers of the place gain access to a range of exclusive services. One of the …

Open
The Cubbon Museum is one of the most notable sights of the city. It is named after the main commissar of the country. The museum was organized in 1864 and is situated in the central part of the city. The Cubbon Museum is surrounded by the park of the same name. Walk through the Cubbon Park and you will reach the State Museum that exhibits large collections of coins, sculptures and ceramics.
One more sight of Bangalore is a local planetarium that has been built in honor of Jawaharlal Nehru’s (the 1st prime minister of India) 100th birthday.

Lal Bagh Botanical Garden is a real piece of untouched nature. The garden is a home to over 1 thousand types of flowers and trees. Here you will find over a hundred and a half of roses’ types, and the garden’s most famous sight is an artificial pond with magnificent lotuses. Copyright www.orangesmile.com
Old hotels keeping the history of Bangalore
Bangalore has amazing hotels in which modern designers managed to recreate the atmosphere of past centuries. One of these places is a luxury hotel The Oberoi Bangalore that can be found in a …

Open
Hyder Ali fort is known as the most notable architectural sight of Bangalore. This ancient fort was built in the end of the 16th century and was used as one of main protective facilities during fights with the Englishmen. Because of this a significant part of the fort has been destroyed. 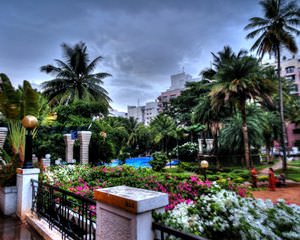 Other famous sights, Summer Palace and Ganesha Temple, are located nearby. Western part of Bangalore is known for the famous Bull Temple and Maharaja Temple. Luxurious Indian palaces, spacious gardens and mango groves – this resort resembles an old Indian fairytale, an unexpected and a breathtaking one.
Best hotel choice for romantic escape, wedding or honeymoon in Bangalore
Bangalore is a perfect place for a romantic getaway. Fortune Select JP Cosmos hotel offers a full range of facilities for an unforgettable holiday for two. There are charming beige rooms …

Open
At the heart of Bangalore is a famous amusement park Fun World Palace, which is very popular among families with children. The area of the park is more than 22 hectares, its territory presents attractions for children of different ages, some of them suitable for adults that like extreme. One of the main attractive features of the park is considered to be the variety of water rides and pools, a hot day can be spent here with satisfaction. 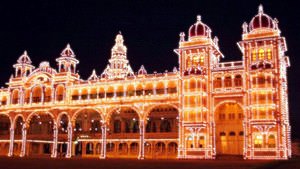 Lovers of wildlife will be in for an interesting surprise during rest too, as they will be able to visit located in the immediate vicinity of Bangalore National Park Bannerghatta. This National Park is one of the largest and most interesting in the country, with an area of over 104 square kilometres. The park was founded in 1974 and today on its territory are carried out exciting safaris and walks, during which you can admire the wild animals. The variety of fauna is simply amazing, in this park you can see leopards, lions, tigers, wild boars, elephants and bison, as well as dozens of other species of animals and birds.
Shopping in Bangalore - main shopping streets, outlets and boutiques
Commercial Street is the most popular shopping street in Bangalore. It houses dozens of shops selling traditional Indian saris, nice souvenirs, European-style clothes and popular national …

Open
travellers that like an unusual entertainment should visit "Snowtown" in Bangalore. It is one of the most original entertainment centres of the city, where visitors are offered at any time of the year to play in the snow and ride from real snow slides. Centre rents warm clothing to all visitors, so here you can visit even in the midst of a hot summer day. 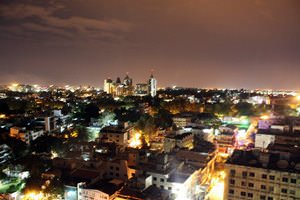 A fascinating aquarium is also there in Bangalore, which was opened in 1983, so far it is the second largest aquarium in the country. It is located at the entrance of the popular Kuban park; in this aquarium visitors can see dozens of species of exotic fish and other marine life. Some of them are quite rare representatives, including angel fish, as well as luminous tetra. On the ground floor there are special tanks, in which visitors can feed fish themselves.
Family holidays with kids in Bangalore. How to entertain your child, things to show to children.
One of the most popular places for a family vacation for Bangalore’s guests is the amusement park Wonderla. It occupies a large territory, decorated with exotic plants. A suitable …

Open
An ideal place for admiring the architecture is a National Palace Tip Sultan, it is almost completely built of wood. During its lifetime, this palace managed not only to preserve its pristine facade, but also the incredibly beautiful interior.

This guide to iconic landmarks and sights of Bangalore is protected by the copyright law. You can re-publish this content with mandatory attribution: direct and active hyperlink to www.orangesmile.com.
Bangalore - guide chapters 1 2 3 4 5 6 7 8 9 10 11 12 13 14

Survived castles around Bangalore
♥   Castle 'Anegondi Fort' , 2 km from the center. On the map

National and city parks around Bangalore
♥   National Park 'Bannerghatta' , 20.3 km from the center. On the map

Art galleries in Bangalore and around
♥   Art museum 'National Gallery of Modern Art' Bangalore, 0.9 km from the center. On the map

Sights around Bangalore from our guide 'Extreme places on Earth' 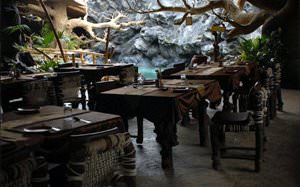 Distance from Bangalore center - 22.7 km.
The gourmets know the original rock hotel thanks to the national restaurant Sambhojana located on its territory, where one can taste the most popular dishes of Indian cuisine. The followers of the luxury recreation can visit an excellent spa salon, where all the treatments with the use of the exclusively natural components are carried out. If you want to bring variety into the recreation, you can learn to shoot with the arrow and bow or to master the beginnings of the mountaineering. For the guests, the exciting national entertainment programs are regularly held in the amphitheater. … Read further

Search touristic sites on the map of Bangalore

Sightseeing in regions nearby Bangalore

Chennai
The city, first of all is the largest industrial center, which attracts hundreds of business people from all over the world. In India Chennai is called the automobile capital of the country. Besides Indian companies here are located branches of such factories as Mitsubishi, Ford, and Hyundai. The largest factory that produces military equipment is also located here. However, ... Open »
Madurai
India is famous for its marvelous temple city of Madurai that is situated in the southern state of Tamil Nadu. This settlement is considered the oldest continuously inhabited city in India. Madurai has become internationally famous after the building of the Meenakshi Temple. Why is this city often referred to as “the temple city”? There is a shrine on almost every street ... Open »
Goa
Goa is often called the Pearl of the Indian coast. The resort has long been associated with fabulous natural beauty and unique atmosphere of peace and harmony. Luxurious hotel complexes, restaurants and entertainment venues attracting movie stars and famous politicians are located there. Resorts of Goa have become popular quite recently; in the early 60s of the 20th century ... Open »
Kandy
Tourists can get to Kandy from the capital of Sri Lanka, the city of Colombo. There are daily high-speed trains that connect the cities. The journey time is roughly three hours. If you choose to hire a taxi to get to Kandy, the ride will last approximately the same time. Besides the main means of transport, tourists can get to the old city by minivans or buses. Quite often, ... Open »
Colombo
You can get acquainted with the collections of an ancient art in Museum of Colombo. The halls of the museum hold exhibitions devoted to numerous precious exhibits. The most famous of them is the throne decorated with precious stones and gliding. If you come to Colombo in February, you will be able to participate in the annual holiday called Navam. For several days the city ... Open »
Bombay
The city offers numerous exciting excursions to its guests. You should definitely visit Elephanta Island, where you can walk through caves, which walls are decorated with ancient drawings. During the journey you will visit the area of Kala Ghoda, where are located several galleries and museums dedicated to works of art. Finally, diversify the tour program by visiting the ... Open »

All about Bangalore, India - sightseeings, attractions, touristic spots, architecture, history, culture and cuisine. Prepare your trip together with OrangeSmile.com - find out the 'must see' things in Bangalore, which places to visit, which excursions to take, where the breathtaking views are waiting for you. Planning your trip with this travel guide will help your to get the most out of Bangalore in few days.