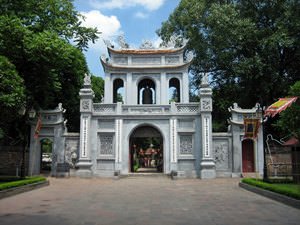 It’s hard to imagine Hanoi, and Vietnam in general, without its famous architectural landmarks. Hanoi Cathedral, Ho Chi Minh Mausoleum, Ho Chi Minh Museum, and Flag Tower of Hanoi have shaped the historical and architectural look of Hanoi. Let’s take a closer look at these landmarks from an unusual perspective – simply fly over the main sights! The supporting video includes a virtual tour around the above mentioned architectural landmarks of Hanoi in HD format. Below, we will add the most exciting historical facts regarding every place of interest. The overview map of all iconic landmarks of Hanoi can be found at the bottom of the webpage. 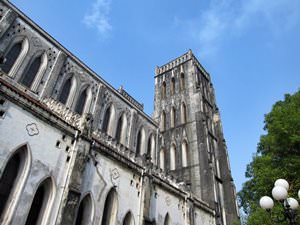 Facts:
» The Hanoi Cathedral of St. Joseph was built in 1886 on the site of a very ancient and ruined Buddhist pagoda.
»  The the vicar of the church, Paul Francois Puginiier, petitioned the construction of the Catholic church in front of the French administration. The cathedral was built in two years.
»  It resembles the French Cathedral of Our Lady of Paris. Two bell-towers 31 m high are equipped with five bells each.
»  A very beautiful interior is supported by arched and stained-glass windows. The walls are decorated with wooden carvings with gilding.
»  After a long break, the temple resumed worship in 1990. In the same year, the last cardinal of Vietnam was buried in the cathedral.
»  The temple continues to collect numerous believers for its services. Often, street musicians play in the inner courtyard of the cathedral. It is always pleasant to listen music and have a cup of tea here. 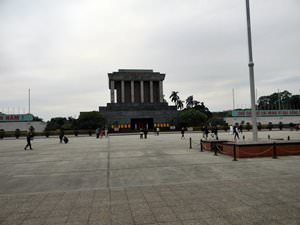 Facts:
» The mausoleum of Ho Chi Minh - the resting place of the first President of North Vietnam - is located on the Badin Square. At this point in 1945, Ho Chi Minh declared independence of the country.
»  The president died in 1969. He bequeathed to cremate his body and dispel the ashes over Vietnam.
»  But the comrades-in-arms made a different decision. The body was embalmed and kept in a secret place, because there was a war at that moment and American planes performed repeating bombings.
»  Only after the end of hostilities in 1973, locals began construction of the mausoleum.
»  The project was executed by Harold Isakovich, a Soviet architect who participated in the construction of the Lenin Memorial in Ulyanovsk.
»  The mausoleum was inaugurated in 1975. It was a square building with a height of 21.6 m.
»  An orchard is built around the mausoleum. It hosts 250 trees brought from all parts of Vietnam. 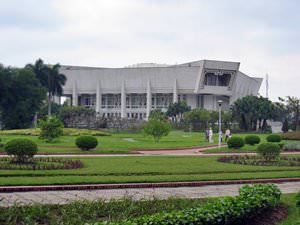 Facts:
» The Ho Chi Minh Museum in Hanoi was opened on the day of his 100th anniversary in May 19, 1990.
»  The bulk of the construction work was undertaken by the Soviet government: construction teams, construction materials, and designers came from USSR.
»  Thousands of tons of special steel for piles, tons of precious stone for wall cladding were also brought from Soviet Union.
»  The main architect of the project was Harold Isakovich, he also designed the Ho Chi Minh Mausoleum. The territory occupied by the Museum is about 18,000 square meters. This is the largest museum in Vietnam.
»  The largest room can accommodate up to 400 people. There is a special library for 100 seats.
»  An exposition of the traditional Vietnamese crafts is presented here - carving on wood and stone.
»  The museum is part of the Architectural Ensemble of the Mausoleum of President Ho Chi Minh.

Facts: » The Hanoi Flag Tower was built during the Nguyen Dynasty in 1812. It was used to monitor the surrounding area. The height of the tower was 33.4 m.
»  During the French rule (1885-1954), many ancient buildings were destroyed, but the Flag Tower remained intact.
»  This is an octagonal three-story building. Inside there is a spiral staircase leading to the top.
»  There are small windows along the perimeter of the tower, the gratings on which depict the Drachma wheel - a symbol of the Buddhist path.
»  Today, the Tower belongs to the Military History Museum and therefore old cannons stand at its foot.
»  Tourists climb the observation deck to be able to view the complete area of the Hanoi Citadel.
»  It was declared by UNESCO as the world heritage of mankind in 2010.

This guide to architectural sightseeing in Hanoi is protected by the copyright law. You can re-publish this content with mandatory attribution: direct and active hyperlink to www.orangesmile.com.
Hanoi - guide chapters 1 2 3 4 5 6 7 8 9 10

City tours, excursions and tickets in Hanoi and surroundings

Build your walking routes in Hanoi on the landmark map

Architectural landmarks in the regions around Hanoi

Hong Kong
It’s a modern memorial built in 1993 in the form of a large seated statue of Buddha that is 34 metres high and weighs 250 tons. To get to the statue, you need to climb 268 steps. There’s a temple inside. The first floor decorated with paintings of the Buddha’s earthly life houses the Hall of Benevolent Merit. The second floor has a wooden panel depicting 160 pairs of eyes conveying different human emotions. The third floor houses the Hall ... Open »
Bangkok
The Grand Palace is the Bangkok's most famous landmark. The palace consists of several buildings, occupying an area of 218 thousand m2 and is surrounded by four walls of 2 km long. The Grand Palace served as the residence of the Kings of Thailand. Its construction began during the reign of King Rama I in 1782. There are various government offices, temples and the Royal Library in the palace. In addition, many galleries of the palace are ... Open »
Shanghai
The Oriental Pearl Tower is the TV tower in Shanghai built in 1994. The height of this TV tower is 468 meters. This is the third highest in Asia and the fifth highest tower in the world. The tower consists of 11 spheres of different sizes. Two largest spheres are 50 m and 45 m in diameter, the diameter of the smallest and the highest spheres is 14 meters. Two of the large spheres are linked by three columns, each of which is 9m in diameter. ... Open »
Kuala Lumpur
The Petronas Towers are the highest twin towers in the world. They have 88 floors and are 452 m high. According to the project, the buildings feature a huge size and a complicated structure. Their foundation is 100 m beneath the ground and is the deepest in the world. The towers are connected by a glass bridge that is situated at a height of 170 m. There is also an observation platform. As the towers swing, the bridge joint with ball bearings ... Open »
Singapore
The Singapore Flyer reaches a height of 55-storey building with a total height of 165 m. The Singapore Flyer is 30 m higher than the London Eye. The Singapore Flyer has been the world's tallest Ferris wheel until March 2014, when Las Vegas ride was put in action. It’s 2 meters higher than the Singapore Flyer. The wheel diameter is 150 m. The wheel itself is embedded in a three-story terminal building housing shops, bars and restaurants. ... Open »
OrangeSmile.com - online travel reservation expert providing reliable car rental and hotel booking services. We feature more than 25.000 destinations with 12.000 rental offices and 200.000 hotels worldwide.
Secure Server