Sightseeing in Jaipur - what to see. Complete travel guide 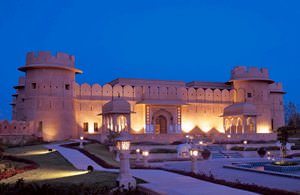 Many tourists from all over the world know Jaipur as a “Pink City”. If you arrive in this beautiful city and visit its old quarter, you will see the reason for this name with your own eyes. Indeed, all buildings in this part of the Indian city have a pink or terracotta color. Jaipur is also the capital of the Indian state of Rajasthan. According to traditions of the ancient Indian architecture, the territory is divided into nine rectangular sectors. This is the location of the major attractions of this region. Don’t be surprised if you happen to see an elephant during your walk in Jaipur. This is normal for this Indian city.
Legendary ruler and warrior Jai Singh II was the founder of the city. He was also a talented astronomer. When his father Maharaja Bishan Singh died, the boy was only 11. Despite such a young age, Jai Singh II had to become a ruler. At that time, Amer was the capital of the region. It was located eleven kilometers away from modern Jaipur. To protect the territory, Jai Singh II built a fort of an impressive size. He named the fort Jaipur.
The kingdom of Jai Singh II was getting richer year after year. Its population was growing too. The capital, Amer, became so populous that there was not enough water for all people and too little space to build new houses. It was clear that Jai Singh needed a new capital. This is how Jaipur was founded in 1727. The city got its name after its founder. Later, Sawai Ram Singh I became the ruler in the region. In 1876, Prince of Wales was to visit the Indian city. The maharaja decided to greet the British royal in an unusual way – he ordered to paint all the buildings in the city in pink. Copyright www.orangesmile.com
Do you want to see one of the most beautiful works of Indian masters? In Jaipur, tourists can visit a truly fabulous architectural landmark – the Hawa Mahal or the Palace of Winds. It is situated in the heart of the city, in a vibrant district that is always crowded. Needless to say, crowds of tourists come to see this tremendous work of the great Indian architects. The palace was built by the order of Maharaja Jai Singh. However, he died before the building was finished. Hawa Mahal was complete only in 1799. 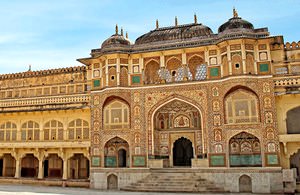 It was Maharaja Sawai Pratap Singh, the grandson of the founder of Jaipur Jai Singh II, who finished the palace. The maharaja loved the palace and spent every summer in it together with his large family. Hawa Mahal has a peculiar construction that lets it stay cool even on hot days. The building has five stores and looks much like a pyramid with numerous rooms and balconies. If you look at Hawa Mahal on a sunny day, you will notice how incredibly it looks like under sunrays. It feels like the palace is on fire. Red and pink sandstone, the material that the palace is made with, creates this visual effect.
Jaipur is rich in luxurious buildings that never cease to amaze and impress numerous guests. The City Palace in the heart of Jaipur is definitely one of them. The Mongolian style together with the traditional architecture of Rajasthan makes this building look unforgettable and unique. The construction of the palace started in 1729. The main palace was finished first, and other adjacent buildings appeared later. Nowadays, all buildings in the complex have high fences and a system of inner passages, corridors, and terraces that connect them. 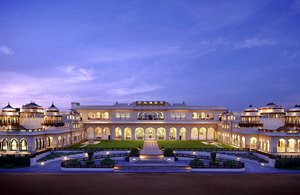 Tourists will find it interesting to visit numerous museums in the City Palace. One part of the building is still reserved as a residence of the royal family. The Museum of Weapons is the most popular establishment in the palace. Visitors will be surprised to see an incredibly big and diverse collection with roughly two thousand different items. There are weapons of different age, from antique prototypes to the modern ones. The oldest weapon in the collection was made in the 16th century. If you want to take a look at maharajah’s clothes, the museum of textiles is the right place to visit.
Are you a fan of extreme adventures? In this case, Jaipur can offer suitable entertainment for you – a safari in a car with an open-top in the Ranthambore Tiger Park. During a safari here, visitors will see tigers, as well as panthers, jackals, hyenas, and desert lynxes. Besides that, the safari covers areas where bears live, deer search for food, and families of wild boars, rabbits, and gazelles enjoy their everyday life. Numerous birds flying in the sky create an absolutely immersive atmosphere. 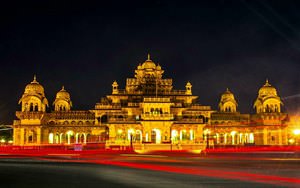 To see this magical place as well as many other landmarks that Jaipur is famous for, tourists need to get to Delhi first. Not many cities in the world have a direct airplane connection to this Indian city. Having arrived in the capital of India, take a flight to Jaipur – the ride will be not long, roughly half an hour. If you decide to travel by train, the road will be significantly longer – almost six hours. When traveling by car or bus, it will take five to six hours to get to Jaipur from Delhi.
This guide to iconic landmarks and sights of Jaipur is protected by the copyright law. You can re-publish this content with mandatory attribution: direct and active hyperlink to www.orangesmile.com.

City tours, excursions and tickets in Jaipur and surroundings

Survived castles around Jaipur
♥   Castle 'Nahargarh Fort' , 3.9 km from the center. On the map

National and city parks around Jaipur
♥   National Park 'Ranthambhore' , 122.4 km from the center. On the map

Art galleries in Jaipur and around
♥   Art museum 'Albert Hall Museum' Jaipur, 3.2 km from the center. On the map

Sights around Jaipur from our guide 'Extreme places on Earth' 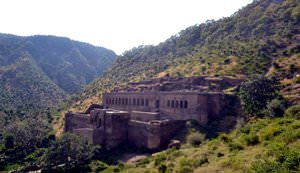 Distance from Jaipur center - 54 km.
Locals believe that today the ruins of this once majestic fort are home to thousands of souls of dead people. An attempt to surround the fort with armed patrols to debunk its notoriety failed, as there was not a single person in the whole country who would venture to guard the cursed place. Mysterious Fort Bhangar never ceases to attract curious tourists, but they visit it only at the daytime, when the mystical fort is filled with sunlight. … Read further

Search touristic sites on the map of Jaipur

Sightseeing in regions nearby Jaipur

Agra
Fabulous Agra. Many know this city as the home of the Taj Mahal, but this is not really correct because there are many other landmarks in this marvelous city. There are many must-see architectural landmarks in Agra, the likes of which are simply not available anywhere else in the world. However, when planning a vacation in Agra, tourists need to keep in mind that this city is ... Open »
New Delhi
New Delhi is a city that simply strikes visitors by its unique color and wonderful atmosphere of hospitality. The streets of the city are a unique combination of ancient palaces and modern buildings, bringing New Delhi its special charm. The central part of the city is decorated by Rashtrapati Bhavan Palace, which was built in 1929. Today it is the residence of the President ... Open »
Lucknow
Lucknow is the capital of the Indian state of Uttar Pradesh. This amazing city stands on the bank of the Gomti River. Nowadays, Lucknow is recognized as one of the best cities in India. It perfectly combines the elegance of the old world with its own historical charm. During a vacation in Lucknow, you will be able to get acquainted with local landmarks, see historical ... Open »
Amritsar
Guests of Amritsar need to keep in mind one thing that they need to consider when preparing to visit the border closing ceremony. When heading to the ceremony, tourists need to leave all non-transparent bags in their hotel rooms. Women cannot even take clutches and cosmetic bags. Even camera cases are prohibited. A failure to follow this rule increases your chance not to see ... Open »
Lahore
A journey to the capital of the Punjab Province – the city of Lahore – is an opportunity to make a “time travel”. This city has a mysterious and enchanting atmosphere of the past that makes an acquaintance with Lahore even more interesting. Having arrived in this city, travelers become witnesses how the past becomes alive, history finds its reflection in the gorgeous ... Open »
Ahmedabad
Beautiful Ahmedabad, which is situated in the western part of India, is the largest city in the state of Gujarat and one of the largest cities in the country. This is a true megalopolis – Ahmedabad is home to 5.6 million people. The city is built on the bank of the Sabarmati River. This region is often regarded as the center of the Gujarat State. Ahmedabad has a long and rich ... Open »

All about Jaipur, India - sightseeings, attractions, touristic spots, architecture, history, culture and cuisine. Prepare your trip together with OrangeSmile.com - find out the 'must see' things in Jaipur, which places to visit, which excursions to take, where the breathtaking views are waiting for you. Planning your trip with this travel guide will help your to get the most out of Jaipur in few days.