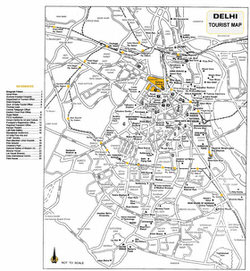 Interactive maps of hiking and biking routes around New Delhi

1. You can zoom in/out using your mouse wheel, as well as move the map of New Delhi with your mouse.
2. This interactive map presents two modes: 'Biking Routes' and 'Hiking Routes'. Use the '+' button on the map to switch between them.

This New Delhi map has two modes: 'Railway Network' and 'Landscape & Rural Map'. Use the '+' button on the map to navigate.

Nature and parks of India

Another park called “Manas” has borders with the Kaziranga National Park. Here flows the Kaziranga’s River. It received its name in honor of the goddess of snakes. “Manas” is located right on the border of India and neighboring Bhutan. The inhabitants of the park can freely cross the state border, which is the river separating the park. “Manas” is located in the foothills of the Himalayas, which makes this place charming and unique. The snow-white peaks look very beautiful in contrast with the lush greenery of the national park. The park is inhabited by tigers, rhinos, and a number of rare birds. If you are lucky enough, you will be able to see rare swamp deer. You can move around Manas either by jeeps or elephants, and this will give a special touch to your visit to Manas. … Open

Our guide to New Delhi

Walking in New Delhi's popular tourist districts, one can explore many more interesting features hidden from ordinary tourists. Cricket is the favorite sport for locals, and if you are lucky enough to visit New Delhi during one of the championships, you can take part in incredible celebrations. On the days of the match, all citizens take to the streets, improvised stages and street food stalls can be seen … Open

Among parks for raising one's mood, it is worth mentioning a few more ones. For example, Hauz Khas District Park with its Deer Park - as the name implies, it became home to graceful deer. Besides, the park offers yoga classes, a picturesque pond with picnic areas, as well as several historical attractions. No less enjoyable for walking are Central Ridge Reserve Forest with its wonderful scenic views and Asola … Open

5. Bargaining is welcome on local markets and in street stalls as in most cases this lets to reduce a price for desired goods by several times. Many sellers reckon upon the unawareness of travelers and can skyrocket the prices. 6. This fact considers local taxi services as well that is why tourists should specify and compare the rates for a trip and try to negotiate the cost. If a driver is obviously … Open

Palika bazaar is also another extremely attractive place for choosing new outfits and souvenirs. This one offers a lot of inexpensive European-style clothes, as well as pavilions with watches, sunglasses, and other souvenirs. Even though the price level at this market may seem more than affordable to most tourists, big sales are held here regularly. Among New Delhi's shopping centers, Select Citywalk stands … Open

Tumble House is a perfect entertainment center for recreation with small children. The indoor center has prepared safe slides and inflatable attractions for kids, lots of toys and space for active games. The brightly decorated center is suitable for families with children from two years old. A visit to the National Science Center is a great way to diversify cultural activities. Its rich collection is dedicated … Open