Video of flights over top monuments of Bangkok in HD format.
Use 'Full Screen' mode.
This review is a great opportunity to look at architectural landmarks of Bangkok from a new perspective – namely, from the sky. Click the video to enjoy a 3D flight over the architectural ensemble of Bangkok and to look at the most interesting landmarks in detail - at Grand Palace, Temple of Dawn, Ananta Samakhom, Phra Sumen Fort, Bangkok City Hall and many others. Below you will find the most amusing historic facts and professional photographs of every famous sightseeing in Bangkok. 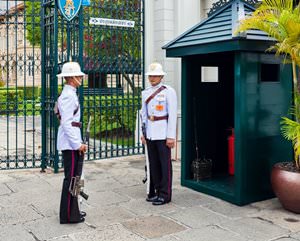 Facts:
» The Grand Palace is the Bangkok's most famous landmark.
» The palace consists of several buildings, occupying an area of 218 thousand m2 and is surrounded by four walls of 2 km long.
» The Grand Palace served as the residence of the Kings of Thailand. Its construction began during the reign of King Rama I in 1782.
» There are various government offices, temples and the Royal Library in the palace. In addition, many galleries of the palace are decorated with frescoes depicting the life of Rama I.
» The palace is almost always open to visitors. However, you can enter the territory of the palace complex only in long clothes.
» There is the lying Buddha at the palace. Statue of the lying Buddha is 15 meters in height and 46 meters in width. The statue is covered with golden sand. 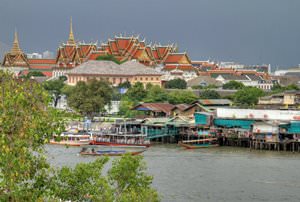 Facts:
» The Temple of Dawn is one of the most beautiful temples in Bangkok despite of its relative modesty and simplicity. Unlike most others, this temple is missing a large number of gold statues, emerald decoration and other luxuries.
» The height of the temple tower is variously estimated from 66.8 to 88 meters, and it’s still the highest in Thailand.
» The tower of the temple remained the highest in Bangkok until the beginning of construction of skyscrapers.
» Currently, anyone can climb to the top of the temple tower and admire Bangkok from aerial view.
» The temple got its name in honor of the Indian god of dawn, Arun. 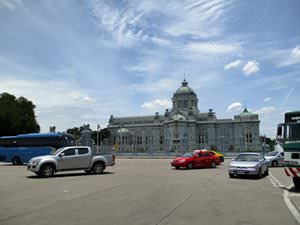 Facts:
» Ananta Samakhom or Throne Hall is the former villa of the Dusit Palace.
»  The Palace is made of white Carrara marble and Milanese granite; the complex covers an area of 5.5 km2.
» The Royal Throne Hall is located under the central dome of the palace; its walls are richly decorated with frescoes depicting scenes from the life of the reigning Chakri Dynasty.
»  Ananta Samakhom is now a museum that can be visited every day from 9.00am to 4.30pm.
» The Throne Hall features a variety of ornaments and jewelry masterpieces. All jewelry and artifacts are made of real gold and precious stones. 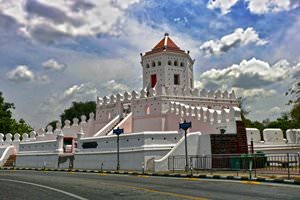 Facts:
» The Phra Sumen Fort is one of the few old defensive structures in Bangkok, which have survived to these days.
» It was built during the reign of Rama I in 1783 to defend against the invading Burmese.
» The fort is built of brick and is surrounded by 14 small patrol towers.
» The small cozy park is situated next to the fort. 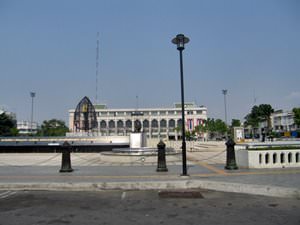 Facts:
» The Bangkok City Hall was built in 1880.
» At that time, it was the only building in Bangkok built not for religious purposes.
» Recently it has become the new Public Library and Museum.
» Today you can go to the meeting room of the municipality and the central hall, where various exhibitions and ceremonies take place.

Facts: » The Holy Rosary Church is one of the first Christian churches in Bangkok.
» It was created by Portuguese sailors in 1787.
» At present, main visitors of the temple are local Catholics, the Chinese and immigrants from Vietnam and Cambodia.
» This temple is one of the Christian monuments in the predominantly Buddhist country, indicating the religious harmony in Thailand.
» Among the local residents the church is known as Kalawar that comes from the distorted word ‘Calvary’.

City tours, excursions and tickets in Bangkok and surroundings

Build your walking routes in Bangkok on the landmark map

Architectural landmarks in the regions around Bangkok

Hanoi
The Hanoi Cathedral of St. Joseph was built in 1886 on the site of a very ancient and ruined Buddhist pagoda. The the vicar of the church, Paul Francois Puginiier, petitioned the construction of the Catholic church in front of the French administration. The cathedral was built in two years. It resembles the French Cathedral of Our Lady of Paris. Two bell-towers 31 m high are equipped with five bells each. A very beautiful interior is ... Open »
Kuala Lumpur
The Petronas Towers are the highest twin towers in the world. They have 88 floors and are 452 m high. According to the project, the buildings feature a huge size and a complicated structure. Their foundation is 100 m beneath the ground and is the deepest in the world. The towers are connected by a glass bridge that is situated at a height of 170 m. There is also an observation platform. As the towers swing, the bridge joint with ball bearings ... Open »
Singapore
The Singapore Flyer reaches a height of 55-storey building with a total height of 165 m. The Singapore Flyer is 30 m higher than the London Eye. The Singapore Flyer has been the world's tallest Ferris wheel until March 2014, when Las Vegas ride was put in action. It’s 2 meters higher than the Singapore Flyer. The wheel diameter is 150 m. The wheel itself is embedded in a three-story terminal building housing shops, bars and restaurants. ... Open »
Hong Kong
It’s a modern memorial built in 1993 in the form of a large seated statue of Buddha that is 34 metres high and weighs 250 tons. To get to the statue, you need to climb 268 steps. There’s a temple inside. The first floor decorated with paintings of the Buddha’s earthly life houses the Hall of Benevolent Merit. The second floor has a wooden panel depicting 160 pairs of eyes conveying different human emotions. The third floor houses the Hall ... Open »
Jakarta
The Arabic name of the mosque is “independence”. It gained its name in commemoration of freedom from Dutch domination. Masjid Istiqlal was built at the site of the former fortification in the middle of the 19th century. In 1955, the contest on design projects was won by a Christian architect. The construction lasted 17 years. The new building was officially built in 1978. It accommodates up to 120 thousand people. The main building has a ... Open »
OrangeSmile.com - online travel reservation expert providing reliable car rental and hotel booking services. We feature more than 25.000 destinations with 12.000 rental offices and 200.000 hotels worldwide.
Secure Server