Sightseeing in Madurai - what to see. Complete travel guide 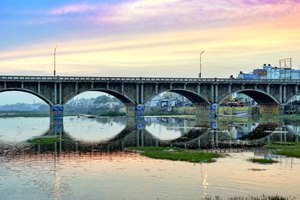 India is famous for its marvelous temple city of Madurai that is situated in the southern state of Tamil Nadu. This settlement is considered the oldest continuously inhabited city in India. Madurai has become internationally famous after the building of the Meenakshi Temple. Why is this city often referred to as “the temple city”? There is a shrine on almost every street here. Besides that, the city’s territory is full of numerous cafes and restaurants. Because of this peculiarity, Madurai is also famous as the city that never sleeps. Local streets remain active and crowded both in the daytime and at night.
First settlers in the territory of modern Madurai appeared yet in the third millennia BC. Various manuscripts mentioned this settlement as the capital of the ancient kingdom of Pandya. At the beginning of the 9th century, the Chola dynasty added this Indian city to their territories. Madurai became an independent city in 1559. However, Chanda Sahib captured the settlement already in the 30s of the 18th century. After him, the nawab of the Carnatik and Muhammed Yusuf became the rulers of the city. All these leaders changed one another in just one century.
The British East India Company established its control over Madurai in 1801. It added the city to the Madras Presidency. This event marked the start of the city’s development as a political and industrial center. At that time, Madurai became the capital of a district with the same name. The British destroyed the fortifications of the settlement’s main fortress in 1837. The moat, which surrounded the fortress walls, was dried up. The materials left from the demolishment were used to build new streets. Madurai officially became a municipality in the mid-60s of the 19th century. Copyright www.orangesmile.com
The Meenakshi Temple is considered the oldest Hindu temple complex. The shrine is dedicated to goddess Meenakshi who is immortalized in the name of the complex. The temple lies in the heart of Madurai. The beauty and unusual grandeur of the ancient temple are so striking that Madurai is often called the city of one temple although there are many other notable temples and buildings in the city. According to historical data, the shrine existed here before our age but Muslims destroyed it in 1310. When kings of India returned their power, it was decided to restore the heritage temple and make it as close as possible to the original. 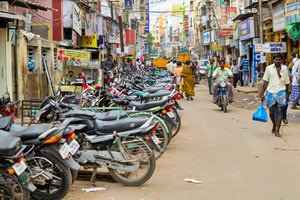 The temple complex occupies an area of nearly two hundred and twenty meters in length and two hundred and sixty meters in width. The height of the Meenakshi Temple is currently fifty-two meters. Fourteen gopurams form the look of the temple complex. Gopurams are towers of a different height. Five towers are erected inside the complex, and the remaining ones stand on the perimeter. All the towers are covered with colorful sculptures of Shiva, Indian goddesses, and priests. Take a closer look and you will notice musicians, animals from ancient myths, and statues of ordinary people. There is a Shiva sanctuary inside the complex.
Would you like to see an authentic Indian palace? In Madurai, tourists can visit an incredibly beautiful place called Tirumalai Nayakar Mahal. This palace was built in the 30s of the 17th century by the order of the king who gave his own name to the palace. This is a truly grandiose and excellent example of the Dravidian and Rajput architectural styles. Initially, this was the biggest building in India. However, the complex lost some parts of it in the 18th century. Nowadays, only the main palace building - Swarga Vilasam – has survived. This was the king’s residence. 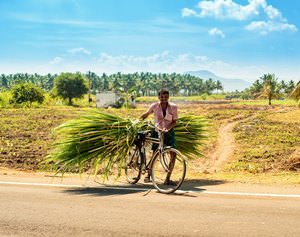 The central part of the historical building is a fantastic fusion of Indian elegance and the pompous oriental style. The royal audience hall is the most popular part of the palace. Visitors find this hall particularly stunning because twelve-meter-tall arches with huge cupolas and renowned arcaded gallery opening look nothing but impressive. A fabulously looking inner yard “welcomes” guests of the popular attraction. The palace regularly hosts interesting performances and music shows. For tourists interested in the country’s heritage, it may be particularly exciting to attend a show based on Silappathikaram, the earliest Tamil epic.
Madurai has its own, so to say, domestic airport. It serves only flights from other Indian cities. Because of this, to get to Madurai, tourists need to fly to Chennai first. The majority of flights to the temple city depart from this Indian megalopolis. After that, make another flight or get on a train to Madurai. If you choose the railway method, the journey time is roughly eight-nine hours. There are also trains to Madurai from Bengaluru, Mumbai, and Delhi. Finally, Madurai has a daily bus connection with such cities as Kerala and Karnataka.
This guide to iconic landmarks and sights of Madurai is protected by the copyright law. You can re-publish this content with mandatory attribution: direct and active hyperlink to www.orangesmile.com.

City tours, excursions and tickets in Madurai and surroundings

Survived castles around Madurai
♥   Castle 'Dindigul Fort Tamil Nadu' , 51.3 km from the center. On the map

National and city parks around Madurai
♥   National Park 'Anamudi Shola' , 95.9 km from the center. On the map

Sights around Madurai from our guide 'Extreme places on Earth' 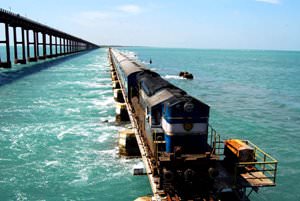 Distance from Madurai center - 138.5 km.
The railway bridge to Ramesvaram island was constructed in 1914 and has 1,4 kilometres in length. Experienced tourists say that worst of all is to cross the bridge in a storm, since it just seems like the fragile bridge construction wobbles with the train over the raging sea. Humming wind never dies down and this also complicates the movement of the train. … Read further

Search touristic sites on the map of Madurai

Sightseeing in regions nearby Madurai

Bangalore
“India’s Silicon Valley” – this name is often used when describing Bangalore. The city got this name because of large number of modern plants located on its territory. However, tourists keep visiting this city not because of industrial development of this region, but because of large number of historical and architectural monuments that can be found here. The Cubbon ... Open »
Colombo
Colombo is one of the largest ports of the Middle Asia. This city is full of unexpected contrasts and is very good for travellers who seek solitude rest. According to one of versions, the city got its name from Christopher Columbus. Today on the streets of Colombo you can see old buildings located near each other and modern business centers made of glass. The culture of the ... Open »
Kandy
The territory of the Royal Botanical Garden is conventionally divided into several zones, each of which recreates different types of tropics. Obtain a special pass and you will be able to visit the orchid area, take a look at unique shapes of their leaves and different flower colors in a special area for houseplants. The Palm tree grove features different species of palm ... Open »
Chennai
The city, first of all is the largest industrial center, which attracts hundreds of business people from all over the world. In India Chennai is called the automobile capital of the country. Besides Indian companies here are located branches of such factories as Mitsubishi, Ford, and Hyundai. The largest factory that produces military equipment is also located here. However, ... Open »
Goa
Goa is often called the Pearl of the Indian coast. The resort has long been associated with fabulous natural beauty and unique atmosphere of peace and harmony. Luxurious hotel complexes, restaurants and entertainment venues attracting movie stars and famous politicians are located there. Resorts of Goa have become popular quite recently; in the early 60s of the 20th century ... Open »
Male Atoll
North Male is the main atoll of the Maldives. This is where the capital of the republic, Malé, with its priceless attractions, cultural centers and luxury hotels is situated. The atoll comprises of 50 islands, of which only 8 are inhabited. It’s noteworthy that each island has its own unique task: there is the island-capital, the airport island, the poultry farm island and ... Open »

All about Madurai, India - sightseeings, attractions, touristic spots, architecture, history, culture and cuisine. Prepare your trip together with OrangeSmile.com - find out the 'must see' things in Madurai, which places to visit, which excursions to take, where the breathtaking views are waiting for you. Planning your trip with this travel guide will help your to get the most out of Madurai in few days.