Sightseeing in Lucknow - what to see. Complete travel guide 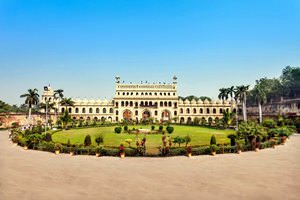 Lucknow is the capital of the Indian state of Uttar Pradesh. This amazing city stands on the bank of the Gomti River. Nowadays, Lucknow is recognized as one of the best cities in India. It perfectly combines the elegance of the old world with its own historical charm. During a vacation in Lucknow, you will be able to get acquainted with local landmarks, see historical attractions of the past centuries, and visit the infamous Hazratganj district, artisan shops in which produce the internationally popular chikan embroidery. Naturally, tourists can always buy embroidered textiles as souvenirs from this gorgeous Indian city.
Initially, Lucknow was a part of the Kannauj Kingdom that had Hindu roots. In 1528, Mughal Emperor Babur captured the city. Later, the grandson of the conqueror made the Indian city a part of the subah of Awadh. The city of Faizabad not far from Lucknow became the capital of Awadh, but it was decided to move the capital to Lucknow in 1775. The power of the Mughal Empire was decreasing year after year, but the city’s importance as a political center was only growing. Because of this, it was decided to make Lucknow the center of the Muslim culture.
At the beginning of 1856, the East India Company annexed Awadh and exiled its leader to Kolkata. Birjis Qadra, who was yet a teenager at that time, became the new leader and his mother Begum Hazrat Mahal became the regent queen. To stop the Indian Rebellion, the British Empire sent a big army to Lucknow. This was a tragic period in the history of the Indian nation because the event claimed the lives of many people. Starting from that time the city completely stopped developing. No one restored the damaged buildings. Lucknow lost its importance for centuries. Copyright www.orangesmile.com
Nowadays, thousands of tourists visit Lucknow to see the ruins of the Dilkusha Kothi Palace. Unfortunately, the beautiful mansion is in ruins and some elements of the original building are missing. Despite this fact, the palace is one of the major architectural landmarks in the city. The construction of the palace started in the 19th century. The initial purpose was to build a hunting house. At least, this was the intention of the British resident Major Gore Ouseley. When the British army left the region, local rulers took over the palace and made their residence in it. 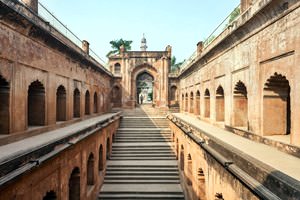 Outside, the Dilkusha Kothi Palace is a three-story building with the architectural elements that are typical for the British and Indian Baroque. The palace suffered much damage during the attacks in 1857. The building was severely damaged. Nowadays, visitors can see only the remaining outer walls and several towers. That being said, an extensive and lush garden still surrounds the palace. Despite its poor condition, Dilkusha Kothi has always attracted many guests who come to see the remains of the former glory. For local people, this palace is a symbol of their fight for independence.
Do you want to see one of the most glorious sacred buildings in India? In Lucknow, tourists can visit a giant architectural complex called the Great Imambara. The population of Lucknow regularly visits this complex of shrines to bow to the sacred place. The construction of the major religious site took place in 1784. Initially, the only purpose of the building was to host religious celebrations during Muharram. The Nawab Asaf-ud-daula, who was the local ruler at that time, ordered to build the complex of shrines. This way the ruler wanted to provide local people with jobs. 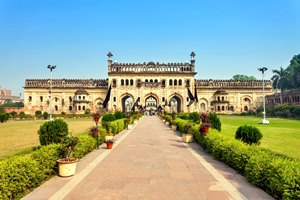 In modern days, the building is a fabulous example of the Mughal architecture with some decent traits of the Rajput architecture and Gothic influences. The main entrance has a beautiful gate that immediately draws the attention of visitors. The central part of the complex has intricate carvings. The shrine complex hides one more attraction - the Bhul-bhulaiya labyrinth that consists of numerous rooms and balconies. The east gate features an impressive portal that even has its own name - Rumi Darwaza. This part of the complex has gilded details and precious stone décor.
The Indian city of Lucknow has an international airport named after Chaudhary Charan Singh. It is situated twenty kilometers away from the central part of this settlement. The airport serves flights from the capital of India – Delhi – and flights from such major Indian cities as Kolkata and Patna. Besides the main air routes, there are flights from Bombay and Hyderabad. The airport in Lucknow has an international connection to Dubai, Muscat, Riyadh, and Jeddah. Tourists can get to the city center from the airport by train or taxi. Not many years ago, the metro has opened in Lucknow.
This guide to iconic landmarks and sights of Lucknow is protected by the copyright law. You can re-publish this content with mandatory attribution: direct and active hyperlink to www.orangesmile.com.

City tours, excursions and tickets in Lucknow and surroundings

National and city parks around Lucknow
♥   National Park 'Campbell' , 6.9 km from the center. On the map

Sightseeing in India: things to see

India has always attracted numerous tourists from different parts of the world by its wonderful beaches, bright colours of weightless sari and snow that is so unusual for a country with hot climate. India is a country with rich culture and heritage that never ceases to amaze visitors with its uniqueness. … Open

Search touristic sites on the map of Lucknow

Sightseeing in regions nearby Lucknow

Agra
Fabulous Agra. Many know this city as the home of the Taj Mahal, but this is not really correct because there are many other landmarks in this marvelous city. There are many must-see architectural landmarks in Agra, the likes of which are simply not available anywhere else in the world. However, when planning a vacation in Agra, tourists need to keep in mind that this city is ... Open »
New Delhi
New Delhi is a city that simply strikes visitors by its unique color and wonderful atmosphere of hospitality. The streets of the city are a unique combination of ancient palaces and modern buildings, bringing New Delhi its special charm. The central part of the city is decorated by Rashtrapati Bhavan Palace, which was built in 1929. Today it is the residence of the President ... Open »
Patan
Lalitpur, formerly known as Patan, is a miraculous city five kilometers away from the capital of Nepal. This is the third-largest city in the country after Kathmandu and Pokhara. Lalitpur enjoys a fabulous location in the Kathmandu Valley. This is a region with numerous Buddhist pagodas and Hindu temples. In recent years, Patan has become a major center of culture and religion ... Open »
Kathmandu
The entire valley became the territory of the Gorkha Kingdom in 1768, and Kathmandu became its capital. This is when the first Nepalese style buildings appeared in the city. Many of them have survived until modern days. The kingdom was developing as well, establishing business ties with other countries. At the beginning of the 19th century, Kathmandu got modern ... Open »
Bhaktapur
Bhaktapur is a scared region situated not far from Katmandu. This settlement was the largest town in the three Newa kingdoms. Bhaktapur is internationally acclaimed for its ancient architectural landmarks. Some call this region the land of potters and craftsmen. This is the primary sightseeing destination in the Katmandu Valley. Tourists from all over the world come here to see ... Open »
Jaipur
The kingdom of Jai Singh II was getting richer year after year. Its population was growing too. The capital, Amer, became so populous that there was not enough water for all people and too little space to build new houses. It was clear that Jai Singh needed a new capital. This is how Jaipur was founded in 1727. The city got its name after its founder. Later, Sawai Ram Singh I ... Open »

All about Lucknow, India - sightseeings, attractions, touristic spots, architecture, history, culture and cuisine. Prepare your trip together with OrangeSmile.com - find out the 'must see' things in Lucknow, which places to visit, which excursions to take, where the breathtaking views are waiting for you. Planning your trip with this travel guide will help your to get the most out of Lucknow in few days.