Sightseeing in Kolkata - what to see. Complete travel guide 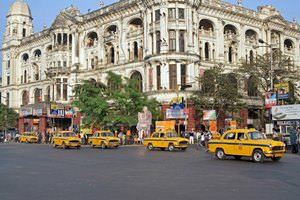 It is safe to say that Kolkata is one of the most authentic and contrast cities in India. This is a true cultural center of the country that is also the capital of West Bengal State. Having arrived in this Indian city, you will be shocked and charmed at the same time. Perhaps, it is hard to find another city in the world where misery and richness are in such a striking contrast. That being said, local people are very friendly and hospitable despite their hard life. The city itself looks like it is centuries back in time and the Indian government forgot about it. Tourists still try to visit this city and see its marvelous landmarks, even though some of them are in poor condition.
Settlements existed on the site of modern Kolkata and its surroundings already more than 2,000 years ago. However, Kolkata as a city started actively developing at the end of the seventeenth century when the British East India Company started working in the region. Reportedly, Job Charnock was the founder of the city, but the Calcutta High Court stated in 2003 that the city didn’t have a founder. During the British reign, the city was the capital region of British India. It maintained this status until 1911. Thanks to this, the Indian settlement is now quite a large scientific, political, and cultural center.
In the mid-19th century, the territory of Kolkata was conventionally divided into two parts, an Indian and British one. Starting from the 50s of the 19th century, the city has been developing at a fast pace. This is particularly true about its industrial side. Kolkata became a center of jute and textile production. The division of Bengal had a negative impact on the life of the city. It was decided to move the capital to another city, New Delhi. The former capital lost its power and, as the following events prove, became forgotten. World War II was one more hard challenge for this region. Japanese aircraft tried to wipe the city off the surface, sending multiple bombs to houses of peaceful locals. Copyright www.orangesmile.com
Massive reconstruction of Kolkata started only in 2000. Nowadays, this Indian settlement is a popular tourist destination due to its numerous attractions. The Victoria Memorial is one of the main landmarks in the city. Nowadays, the building hosts the exhibition of the museum of history dedicated to the past of British India. The name of the gorgeous building speaks for itself. The construction works started in 1906 and were finished in 1921. Lord Curzon decided to make this memorial after the death of Queen Victoria. This is also a gorgeous monument of British India. 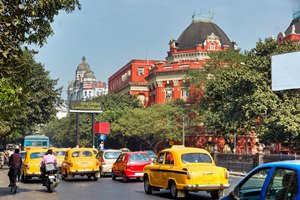 In 1906, Prince of Wales put the first stone in the foundation of the future memorial. The building features Italian-inspired architecture with some decent eastern motifs. The top of the Victoria Memorial has a decoration, a bronze Angel of Victory that looks like he is flying above the city. Would you like to learn more about the culture of Kolkata? Visit the museum that exhibits paintings of various British artists. The paintings depict India and the city in different periods. Visitors can see who was fighting for the independence of the Indian nation and can admire numerous gravures, documents, and photographs of the everyday life of British India.
Goddess Kali is very popular in Kolkata and West Bengal State in general. To praise the goddess and immortalize her name, it was decided to build a shrine dedicated to her. Kalighat Kali Temple was built in the 19th century. Nowadays, the temple is a building with numerous cupolas that make it somewhat reminiscent of Orthodox Christian cathedrals. The gray and white building is very tall. Its height is almost nine meters. 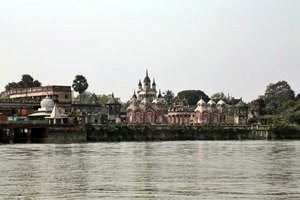 Local people enjoy telling various scary legends about Kalighat Kali Temple. According to some of them, there were human sacrifices in this temple in the past. Moreover, some gossips say that Thuggee followers were monks in this temple. They were killing and robbing local people. They did those crimes in attempts to satisfy Kali who was the goddess of death. In fact, Kali as a goddess never had any destructive nature. Such inhumane deeds were the result of an inaccurate understanding of the goddess and her place in the pantheon.
The waterfront of the Hooghly River is the most crowded place in the city. The length of the waterfront is more than four kilometers. Both residents and guests of the city enjoy taking a stroll here, admiring numerous park areas where people can sit on benches or throw coins to one of the fountains. Are you a fan of active recreation? You will see multiple boats docked along the waterfront. These boasts wait for tourists who want to make an interesting river excursion. 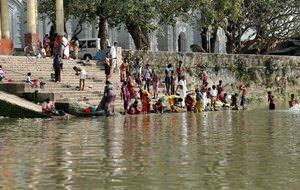 The city’s airport is situated twenty kilometers from central Kolkata. This airport serves flights of many international carriers. Having landed at the airport, tourists can always call a taxi to the city center. There is also a new railroad that connects the airport to Kolkata downtown. If you plan to get to Kolkata from India’s capital, you can always get on a train that goes from Delhi to Kolkata.
This guide to iconic landmarks and sights of Kolkata is protected by the copyright law. You can re-publish this content with mandatory attribution: direct and active hyperlink to www.orangesmile.com.

City tours, excursions and tickets in Kolkata and surroundings

National and city parks around Kolkata
♥   World Heritage Site 'Sundarbans National Park' , 95.4 km from the center. On the map

Art galleries in Kolkata and around
♥   Art museum 'Indian Museum' Kolkata, 2.1 km from the center. On the map

Sightseeing in India: things to see

Search touristic sites on the map of Kolkata

Sightseeing in regions nearby Kolkata

Dhaka
The first settlement on the territory of modern Dhaka appeared in the 7th century. However, certain historical files assume that there were settlements in this area yet in the 1st century BC. At the beginning of the 7th century, the Buddhist kingdom of Kamarupa existed in this region. According to a legend, the city got its name because of a temple dedicated to goddess ... Open »
Darjeeling
Chogyals (Kings) of the Kingdom of Sikkim controlled the territory of modern Darjeeling until the 80s of the 18th century. Later, the Gurkhas of Nepal tried to conquer the territory. After that, East India Company started controlling Darjeeling, but the region’s border still belonged to the British. It was British officers who discovered an old monastery in a remote area in ... Open »
Bhaktapur
This period is widely recognized as the golden age of Bhaktapur. The Nepalese city gains power and influence on the nearby settlements in the Katmandu Valley. Crafts were developing actively during this period. However, good days ended, followed by years of declines and depression. The city lost its former glory in the middle of the 18th century. Its power and influence ... Open »
Patan
The period from the sixteenth to the eighteenth centuries was the most prosperous for Lalitpur. During that time, the Newari Malla dynasty was ruling in the city. When their reign ended, the development of the region stopped, and Lalitpur entered a period of recession. The political importance of the city vanished, and its economy was declining. That being said, the ... Open »
Kathmandu
According to scientists, humans lived in the area of modern Kathmandu already in 2,000 BC. We can learn more about the past of this region from numerous myths and legends. First mentions of Kathmandu in historic records date back to the 4th century when the Licchavis came to this land to establish their dynasty here. They became the rulers of the settlement. The first ... Open »
Bagan
Some tourists might wonder whether there are still any landmarks in Bagan since the city was destroyed. This is a logical question. Despite the tragic events of the past, the city is still worth visiting. There are still thousands of stupas and temples that create a mystical atmosphere and add a secretive charm to the area. The ruins look quite gloomy, but no tourist feels ... Open »

All about Kolkata, India - sightseeings, attractions, touristic spots, architecture, history, culture and cuisine. Prepare your trip together with OrangeSmile.com - find out the 'must see' things in Kolkata, which places to visit, which excursions to take, where the breathtaking views are waiting for you. Planning your trip with this travel guide will help your to get the most out of Kolkata in few days.