Active vacation in Netherlands - things to do, entertainment and nightlife 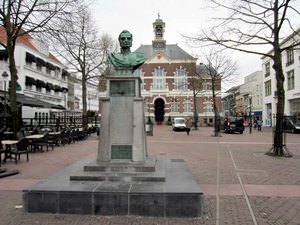 The Netherlands has a fairly long coastline along the North Sea; it’s about 450 km. Therefore, the centers of the active leisure are located mainly on the beaches. The northern sea allows you to practice sailing, swimming, surfing, windsurfing, and kitesurfing from May to September. It’s quite cold here during the rest of the months. Fans of parks and water parks won’t be bored too, as there are numerous amusement facilities in the country. They include the famous Efteling in Kaatsheuvel, which is considered the best park for children in Europe, the safari park in Sevenum, water parks in Amsterdam and Rotterdam, and many others.
Top architectural sights of Netherlands
Monuments and architectural objects, notable for the history and culture of the country. …
Read further
The Netherlands is situated in too cold climate to go surfing. Practically, no one travels there for that. However, you can diversify the rest, combining it with an attempt to ride the wave. The waters of the North Sea are rather cold, so it's better to surf in wet suit, even in summer. The best surf spot is Petten located 60 km from Amsterdam. This place is suitable for those who already know how to stand on the board. Surf schools are also available in Scheveningen, Nordvik aan Zee, Zandvoort, and other towns. One of the most popular beaches for surfing is Domburg. Not far from it, there are numerous hostels and hotels that will come handy.
Winds blowing from the sea provide excellent opportunities for sailing and windsurfing. Friesland and the Frisian Islands are the best to try this sports. The nicest seasons with a stable wind are autumn and spring, but the water temperature may not be high enough, so you will have to use a diving suit. The water at this time usually warms up to 13-15 degrees Celsius. You can dive too. The dive center is in the National Park; you can also explore the sea bottom at the Grevelingen coast. There, you can find a variety of inhabitants of the underwater world, including crabs, jellyfish, lobsters, and others. Copyright www.orangesmile.com
Netherlands sightseeing - top places to visit
It doesn't matter what city you will choose as a starting point of your travel, your vacation in the Netherlands will be equally interesting and …
Read further
The Netherlands is a country of plains. The Dutch like the active and healthy lifestyle, and bicycles have become a part of the country's image long time ago. Walking and cycling are popular tourist activities; the very developed infrastructure works for them. You can rent a bike anywhere. There are nice tracks for cyclist. You can admire exceptional views while hiking. Historically, the Dutch had to reclaim their territory from the sea. The country is mostly below sea level, and it’s reflected in its landscape. There are many rental offices and dedicated territories for scooter, skateboarding, skating, etc. 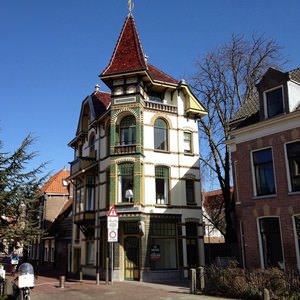 The Netherlands can boast a large number of entertainment parks. One of the largest is Duinrell located near the Hague. The total area of ​​the park is more than 1 million hectares. There are numerous attractions with thematic sections, water parks, playgrounds for kids, and tropical gardens. Keukenhof Park is one of the most beautiful flower parks in Europe with an incredible landscape. Thousands of tulips, roses and other flowers are grown there. There are fountains, canals, ponds, and centuries-old trees. That’s the true embodiment of the Netherlands’ spirit. In the Hague, you should also look into the small Madurodam Park featuring miniature versions of most of the country's sights.

National and city parks of Netherlands
♥   National Park 'De Maasduinen' . On the map

Rotterdam is one of the most extremely vulnerable European cities to the water element. The Netherlands has been continuing to combat the permanent water-level rise for several years. The best engineers from the whole world work on this problem. In 1997 near Rotterdam was built the new powerful sea-wall as a part of the larger project. The seawall is like a huge ball and socket joint gate. The gate can fully cover the 360-meter waterway Nieuwe Waterweg.

It is important to note that during the building of the sea-wall some ecological moments were taken under control. Thanks to that the large construction didn’t make any harm to nature. When the sea-wall was built, about a million living in the immediate area people became in a relative safety. Nowadays about a quarter of the Netherlands … Read all 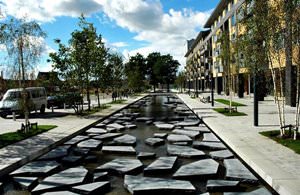 The unusual Roombeek street is in the Dutch city of Enschede. Many tourists know it as the Street of Cracked Stones. Until 2000, this shopping street was just average. That year was marked by a tragic event. A large warehouse of pyrotechnics blew up on the street. More than 650 houses were destroyed in a massive explosion. It took several years to restore the street. During the reconstruction of buildings and pavements, an underground stream was discovered. It was decided to bring the flow to the surface.

Today, the unusual pool with fragments of stones is the main decoration of the newly rebuilt street. You can walk on the stone plates. Stones look particularly impressive in winter, when they are covered with snow. Like many years ago, today the street features numerous shops and eating … Read all
All unique sightseeing Netherlands

Entertainment, recreation and attractions in cities of Netherlands

Amsterdam
Fans of beach rest will surprisingly find entertainment here. The best beaches of Amsterdam are Zandvoort and Ijmuiden. The night life of the city is worth a separated article. On the territory of the city you will find a large number of clubs, night bars, discos and coffee shops. The majority of venues working at night can be found in Red Light District near Rembrandtplein District and Leidseplein Square. Paradiso Club, which is located near the city’s center, is very popular among both … Read more

Maastricht
When it comes to nightlife, Den Ouden Vogelstruys and Take One bars are considered the most prestigious night entertainment facilities of the city. Here visitors will be offered to taste exotic drinks and snacks. Sports fans should visit Bakkerbossh golf field. This place is not only a great destination for fans of this game, but also a wonderful place for relaxation in nature. A simple walk around the city will surely leave great pleasure as during it you can successfully combine sightseeing … Read more

Rotterdam
Fans of night entertainments are the people who certainly will not be bored during their stay in Rotterdam. On the territory of the city you can find various clubs and discos devoted to different themes and music styles. Oude Haven club is considered the most elite institution of the city. The club is located near the market square. Eendrachtsplein district is the location of numerous bars, the majority of which are also open until late at night and offer an interesting entertainment program. … Read more

The Hague
Those, who cannot imagine a vacation without shopping, will definitely have much fun visiting local boutiques and shopping malls. Best souvenir shops can be found in the waterfront area. You will also find a variety of restaurants here. Luxury boutiques, trendy shops, and perfumery salons are located near the Passage. Of course, the majority of nightlife entertainments are located in the city center. Colorful bars, nightclubs and casinos are always ready to serve new guests. You will also find … Read more

Utrecht
Shopping enthusiasts will be delighted by colorful local markets; the most interesting is located in Vredenburg. It works few days a week; at the market you can buy a variety of souvenirs and trinkets. In warmer months, fine flower fairs and Oudegracht Janskerkhof offering luxurious fragrant bouquets work on Saturdays. Most stores and shopping complexes would be found in Oudegracht, Neude and Vredeburg; there are elite clothing stores, stylish boutiques and highly specialized trade pavilions … Read more

Eindhoven
In addition to scenic walks, Eindhoven is ready to offer its guests a lot of interesting ways of spending leisure time. The city has great Holland Casino Eindhoven, which will please both fans of the classic roulette and those who prefer modern gaming machines. In addition, the city has a huge number of attractive bars and clubs where you can taste delicious local beer. The Rambler club is a nice place for a night stay; there is often live music and songs of different styles. Fans of shopping … Read more

Groningen
If you want to take an incredible cruise on a wonderful schooner, it is recommended to try tours from Zeilcharter Willem Jacob. This is one of the best deals in town, and ignoring it would be missing the “cherry on the cake”. You can ride a boat using the services of Wake Park, Rinus or Watersportschool, the views offered by any cruise are quite impressive - these memories will never be forgotten. Of course, you can just enjoy the view of the canals standing at any promenade, which is … Read more

Delft
Fans of nightlife will surely appreciate such widest selection of clubs and discos. Make sure you don’t forget to visit the famous Locus Publicus Delft. This is both a night club and a bar. Here guests are offered to try exotic cocktails, several types of beers and various snacks. The club often hosts parties and stylized performances of popular disc jockeys. Local bars can become a great alternative to nightclubs. Some of them also offer rich cultural program. Speakers bar is a very popular … Read more