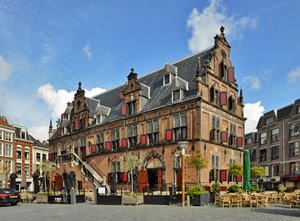 The Netherlands has a very favorable starting economic position, thanks to its location in the center of Western Europe. At the moment, the level of development is high. According to the European Union, the country ranks 6th among all members. The economy is oriented mainly on foreign countries. The policy of peace is applied most of the world, creating new ones and developing established economic relations. According to the world rating of economic freedom, the Netherlands occupies the 13th position among more than 150 countries. The country's GDP before the crisis in 2002 was very high - more than 4 percent. However, at the moment, the indicators are lower, while inflation is 2.4 percent per year. The security level is quite high. The unemployment in the kingdom is the lowest in the entire European Union.
What you need to know about Netherlands prior to visit - advices
1. Don’t go to the Netherlands in a fur coat or other outerwear made of natural fur. Animal rights activists can attack and even set the item on …
Read further
Industry in the country is at the top level. The products are upscale and competitive. The first place is occupied by oil and gas producing assets, followed by the chemical industry, metallurgy, metalworking, electrical engineering, and the manufacturing sector. The power industry is recognized as one of the most important branches of the country's economy. The main mass of electricity is produced by thermal stations. There are only two nuclear facilities in the country. Petroleum products make a quarter of Dutch imports. The ferrous metallurgy of the country is well-developed. Mechanical engineering is up to par. Products of electrical, textile, construction, oil and chemical industries are in demand not only at home, but also abroad. Much attention is focused on the development of transport and machinery for the agricultural sector. The products of Philips corporation are in great demand all over the world. The shipping industry is constantly developing and modernizing itself.
In the post-war period, the active development of the automobile industry began. The joint Volvo company created by Sweden and the Netherlands brings high dividends every year. A huge contribution to the economy of the country is made by the developed transportation system that occupies the 4th position in the world. Rotterdam is still considered the largest port in the world in terms of the cargo turnover; the largest oil refineries are located here. The loyal tax legislation allowed the development of land and sea freight turnover. The policy of the Netherlands is aimed at the world liberalization, and this has become an excellent aid for air cargo branch. The lion's share of all income from exported transport services is generated by air transport, which surpasses even navigation. The food industry is well-developed, especially the production of fermented milk products. Agriculture in the kingdom is growing actively, although it still contributes less in the overall economy. Copyright www.orangesmile.com
What to see and what to visit in Netherlands with children
The Netherlands is a country of freedom and free-thinking, bright nightlife and magnificent museums. However, having a rest with children here is no …
Read further
Since 2011, the Netherlands government together with the monarch has undertaken harsh measures to save money. During this period, there was a significant decrease in tax revenues, as well as a decrease in the country's total GDP. The budget deficit was reduced only in 2013, after a significant increase of taxes for developed industries. Along with this, social expenditures per capita increased too, due to the increase in the unemployment allowance. Despite the difficulties, the Netherlands is still at a fairly high economic level. Therefore, all socially unprotected sections of the population get large monthly payments and pensions. The economy of the Netherlands, first of all, is focused on the welfare of every single citizen of the country. The comfortable environment for the emergence and development of small business is created, while the system of cost reduction functions normally. The insurance system is well-developed too. Therefore, absolutely all citizens of the country feel protected.

In the Netherlands there is the incredibly beautiful and interesting castle on the water - Muiderslot, which is located in the surroundings of Amsterdam. The castle is situated on the mouth of the river Vechte and was built, according to some assumptions, in the second half of the 13th century. The construction was of great commercial importance. During more than 700 years the place for the collection of the taxes of ships, which went to Utrecht. Until the 17th century, the construction lost its strategic importance. The palace served as the residence of Peter Hoft, ruler of Amsterdam.

Its name is one of the most interesting stages of the history of the castle. Peter Hoft was interested in the literature and therefore made the majestic castle a literary salon. Outstanding writers and … Read all
All unique sightseeing Netherlands

Amsterdam
Bijenkorf remains the main department store in Amsterdam. It is located in the heart of the city on Dam Square. The store is open in a beautiful historic building. Inside visitors will find shops of internationally famous clothes and accessory brands, jewelry boutiques and electronics shops, as well as several stores that sell elite perfumes. This department store is particularly popular with females as its ground floor is the location of the largest cosmetics shop in the city. Tourists will be … Read more

Maastricht
If you’re on a budget or simply do not want to spend much, shops located in Wyck district would suit you better. The shops in this part of the city have a lot more democratic prices. Besides clothes, one can buy interesting souvenirs. There are pavilions with classic and inexpensive souvenirs, and there are more interesting souvenir shops that sell exclusive handicrafts. Fans of vintage will be excited with their visit to Wyck as there are several great antiquity shops in that area. … Read more

Rotterdam
Beurs Traverse is widely recognized as the main shopping street in Rotterdam. It’s easy to spend a whole day walking along shining display windows and admiring the variety of goods for sale. There are many interesting specialty shops on Beurs Traverse. Some of them offer fantastic Dutch cheese, and some shops offer excellent chocolate. The choice of clothes stores is no less amazing. Visitors will find both popular stores of mainstream brands and famous boutiques of local designers. Everyone … Read more

The Hague
Around the central square is the famous Haagsche Bluf shopping district. Local stores are located in nice historic buildings. There is a huge choice of souvenir shops. You can buy exciting handmade clay crafts and souvenir attributes with symbols of the city at a very attractive price. In this trading quarter are stores with goods for all occasions, whether it's quality children's clothing, jewelry or tourist maps with descriptions of city attractions. Many interesting shopping pavilions are … Read more

Groningen
In the central streets of the city nearby Grote Markt, there are many clothing stores of different stylistic and price categories. Folk Conceptstore stands among them. It offers customers beautiful designer clothes, made of natural fabrics. In addition to clothing, they sell excellent household goods. You can choose luxury textiles from local manufacturers, great pictures and other interesting accessories. Nearby is a good gastronomic shop, which is popular not only with tourists but with … Read more

Delft
Delft The Read shop is an ideal place for lovers of books. It is the largest bookshop, which, furthermore, is really stylishly decorated. It sells books in different languages. Travellers are attracted to this store by a large choice of guides and colourful postcards, which can be purchased per less than 1 euro. It also sells detailed maps of the city with points of interest, as well as a host of other useful things for tourists. For more original souvenirs you should go to Delft Souvenir Shop, … Read more

Haarlem
For quality clothes and new accessories go to H&M store. This brand is famous for its large choice of clothes from natural fabrics. The level of prices in the store remains very attractive. During the periods of sale, some items can be purchased at a discount of more than 50%. They have a decent choice of accessories, as well. Ladies will certainly be delighted with Ici Paris store, that offers wonderful perfumery made in France. Here, you can find new luxurious Lancome, Issey Miyake and … Read more

Breda
On a cross of Molenstraat and Veermarkstraat is an excellent bookstore. Here, travelers can purchase interesting books on the history and culture of the region, chic scrapbooks and postcards depicting local attractions. Budget travelers will certainly appreciate reasonable prices. One of the most colorful and unusual shopping centers in the city is De Barones. It occupies a beautiful modern building with a skylight. There are popular brand clothing and footwear shops, including city's largest … Read more