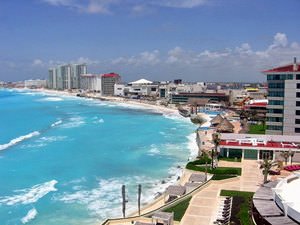 Colorful, sunny Mexico boasts excellent cuisine consisting of a variety of dishes popular all over the world. Most of the recipes are a mix of Spanish and local culinary traditions, some of which date back to the days of the bloodthirsty Aztecs. Mexican diet is based on corn, which is cooked in a variety of ways, like boiling or making corn dough. Mexicans also like green tomatoes, mangoes, potatoes, papaya, preferring chicken and pork. Cumin, thyme, cinnamon, cloves, and cilantro are used as seasonings.
Unique sights of Mexico from our series 'Extreme places on Earth'
These spots really worth the attention of a real traveler-researcher. …
Read further
Even desserts are often seasoned in Mexico. For example, fried ice cream sprinkled with cinnamon. Cinnamon tortillas and chips are eaten with fruit salsa. A very common dish is “huevos rancheros”, a tortilla with fried eggs, beans and potatoes, sometimes seasoned with chili, which is eaten with a fork and knife. Seafood is quite rare in Mexican cuisine, being mostly eaten in coastal regions. As for soft drinks, very popular are Coca-Cola and other fruit sodas. People drink fresh juices sold at every corner, spices are added to coffee. "Horchata" that looks like a milkshake or yogurt is based on ground almonds, rice, and barley. When it comes to alcohol, Mexicans prefer beer.
Being mostly Christians, locals celebrate Christmas and New Year with noisy feasts and a great variety of dishes. On the December and January holidays, they eat sweet “Three Kings Bread” - Rosca de reyes baked in the shape of a wreath and decorated with candied fruits, cherries and other berries and fruits, as well as another kind of sweet bread, “Pan dulce” - on holidays it can be found in any bakery. "Champurrado" - warm chocolate - is also popular. During the Holy Week before Easter, religious Mexicans do not eat meat. Copyright www.orangesmile.com
Top architectural sights of Mexico
Monuments and architectural objects, notable for the history and culture of the country. …
Read further
Mexicans dine slowly, often with the whole family or with friends, actively communicating. Eating too fast is considered ban manners - this can be regarded as a sign of unwillingness to communicate. If you are going to have lunch or dinner in a restaurant or cafe with a group of Mexican friends, keep in mind that it is normal for them to be half an hour, sometimes an hour late. Usually, they drink and talk for half an hour before eating. The same applies to those invited to dinner at a Mexican home - you should not be there exactly on time - this may confuse unprepared hosts. 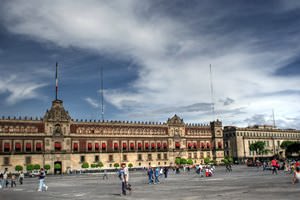 At home, guests can only sit at the table when they're invited by the hosts. Hands shouldn't be hidden under the table, hands (but not elbows!) should be put on the table. Guests begin to eat only after the host. It is considered rude to finish the dish to the last crumb. Bread is put on the edge of the plate or next to it. Leaving the table before others is considered disrespectful. In restaurants, tips should make up 10-15% of the bill. In bars - 10 pesos for a drink. The one inviting to a restaurant or bar usually pays, in other cases, everything depends on the rank.
Mexico sightseeing - top places to visit
A country with rich history, Mexico is home to unique sights of ancient civilizations. The country attracts not only fans of hot countries and beach …
Read further
Food plays an important role in Mexican culture, so it's not surprising that restaurants and cafes are found at every turn in Mexico. Traditional Azul Histórico Restaurant in Mexico City is housed in Downtown Mexico Hotel. Here you can taste all the colors of Mexican cuisine: guacamole, tamales, tacos, various salads and soups, orange muffins, delicate chocolate cakes, and much more. "Pujol" included in the list of the World's 50 Best Restaurants serves fine rice with scallops, mushroom soup with beans, and fried pineapples. 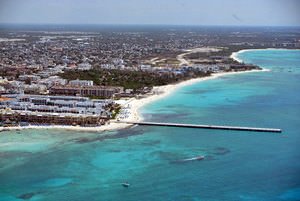 In Ciudad Juarez, there is "Maria Chuchena", a top-class restaurant known for excellent Latin American food. Fresh fruit drinks, tacos, excellent wine, and octopus tacos are served here. In Guadalajara you'll find Allium, an inexpensive restaurant with excellent service suitable for vegans, although it serves meat and fish, all products are local. The restaurant has its own greenhouse and roof garden. All dishes are beautifully presented.

Cuisine and restaurants in popular cities of Mexico

Playa del Carmen
The Kaxapa Factory restaurant is a perfect destination for vegetarian diet followers however the house specialities will be of great interest for steak and chops admirers as well. Among the restaurants of international cuisine the Oh Lala restaurant is of special interest for guests and residents of the city. The restaurant serves its guests till late evening. The eating house features a vast selection of treats and attractive pricing policy. Its hall is decorated in an elegant, modern style. … Read more

Mexico City
Gourmets will enjoy the meat of iguana and boiled adder, and maize porridge is usually served as a side dish. Among the plant food beans occupy the first place. They are added to soups, salads and to the meat goulash. Vegetarians will be also interested in visiting restaurants of Mexico City and try vegetable soups with mushrooms, salads, and exotic dishes made from the "nopal" cactus. Among the restaurants of the national cuisine we should mention Villa Maria, where fans of spicy dishes … Read more

Cancun
Le Fate Ristorante Italiano is an Italian restaurant that is usually recommended by locals. The dining facility serves visitors until late in the evening. Its spacious beautifully decorated hall is always full of fans of Italian pizza and pasta, gourmet desserts and flavorful wine. Tourists, who are not satisfied with the food offered in this restaurant, can always move their feet to La Dolce Vita restaurant that also specializes in Italian cuisine. A part of the restaurant's tables is set on … Read more

Puerto Vallarta
The Ocean Grill Vallarta restaurant specializes in a Mexican cuisine. The name of the eating house suggests the way of cooking of most dishes on the menu. Exotic treats admirers should necessarily try octopus cooked on an open fire and the visitors giving preference to classic cuisine will appreciate the huachinango fish. The Ocean Grill Vallarta restaurant is located on a private beach and the only way to get there is by water. The Mariscos Cisneros restaurant is a perfect place to continue … Read more

Guadalajara
In addition to original institutions of the national cuisine, the city is rich in restaurants that cover a variety of culinary trends. Camden Town Burgers is a great place to try best dishes from the international cuisine. This restaurant accepts guests every day until late in the evening. Sagrantino is also an excellent restaurant dedicated to international cuisine. It attracts visitors not only by a wide choice of dishes, but also by very reasonable prices. Nice atmosphere of the … Read more

Acapulco
Continue your acquaintance with Mexican cuisine in Fogon restaurant. This restaurant is famous by delicious Pozole pork, and beef in a spicy sauce Menudo. Beans, corn tortillas with herbs and vegetable salads remain the main garnishes to meat delicacies. Restaurant Olvido is the best place for a romantic dinner. The basis of the restaurant’s menu is occupied by dishes from the national cuisine. Visitors are also able to order dishes from French and Italian cuisine. It’s worth mentioning … Read more

Monterrey
To help the flavor and taste of the hot pepper to burst, the cooks expose the spice to the various treatments. The pepper can be dried or sun dried a bit, some chefs even resort to smoke drying the pepper to add exquisite aroma to the spice. Genuine gourmands and true cuisine experts describe the local cuisine as a fusion of Indian and Spanish food traditions. At the heart of most ethnic recipes one will find beans, corn, fresh tomatoes and different spice. From a limited set of ingredients the … Read more

Merida
One of the most popular specialties among foreign tourists is "burrito" - a hearty tortilla roll, which can be stuffed with minced meat, beans, cheese, and various vegetables. Such simple dishes are quite inexpensive at local restaurants, they have long been everyday meals for locals. Fans of hearty dishes will be pleased with a large selection of meat, which is also prepared in a variety of ways. It can be fried or grilled over an open fire, all meat dishes are served with a rich vegetable … Read more