Sightseeing in Puebla - what to see. Complete travel guide 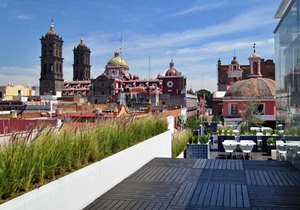 Nestled among four volcanoes, Puebla is a large city in east-central Mexico. Puebla is widely recognized as the “baroque cradle of Mexico”. This title is easy to understand once you arrive in the city – there are many architectural and historic landmarks of different epochs in Puebla. Without a doubt, they are incredibly popular with tourists. Scenic nature is another treasure of this Mexican city. Beautiful landscapes harmoniously frame the enchanting look of Puebla. Mexicans often call Puebla a gastronomic capital because this is the homeland of numerous unique dishes with exotic flavors and tastes.
Archaeological excavations proved that the first settlements on the site of modern Puebla existed long before the start of our age. The modern history of the city started in 1519 when Hernan Cortes entered this region on his way to Tlaxcala. The indigenous people were under the Aztec dominance at that time, and they were not happy about it. That is why when the Spanish army captured the territory, local people met them as liberators. The foundation date of Puebla – 1531 – is also considered the date when the Mexican state was established. At that time, Puebla was an important transition point between Mexico City and the port of Veracruz. There was also a large military garrison in Pueblo.
The favorable location helped the city to become an important economic and cultural center within a short time. The population of Puebla was growing, and the economy of the state was flourishing. The city was growing in size, and so many churches and monasteries appeared in it. The following centuries were the “golden age” for the Mexican city as its production sector was growing. New factories and manufactories were opening in Puebla. After World War I, the city entered a period of instability. Authorities were frequently changing in the city. The situation stabilized only in 1942 during the reign of Governor Gustavo Diaz. The city’s economy started recovering. Copyright www.orangesmile.com
Nowadays, the “cradle of Mexican Baroque” is a unique combination of architectural and cultural landmarks, some of which have gained wide recognition. Pueblo Cathedral is one of the most popular tourist sites. This Roman Catholic church is a fabulous example of colonial architecture. Nowadays, the cathedral is the see of the Roman Catholic Archdiocese of Puebla de los Ángeles. The building of the shrine started in 1557 and lasted almost a century. The church was consecrated in 1690. 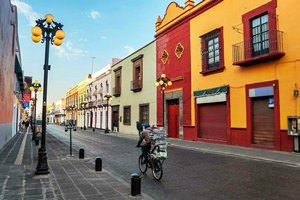 The cathedral’s décor is a unique combination of true treasures. Skillfully made intricate details cover the inside of the church. There are fourteen side chapels and a large iconostasis inside the cathedral. The exquisite alter of the church deserves a separate mention. It was installed during a reconstruction that took place at the edge of the 17th and 18th centuries. Fabulous frescoes by Cristobal de Villalpando decorate the cathedral’s cupola. These frescoes have survived to this day in pristine condition. The paintings feature scenes from the everyday life of the Virgin Mary.
Would you like to see a real treasure of Baroque style? In Puebla, tourists can visit the House of Sugar or Museo Casa del Alfenique. According to a local legend, the blacksmith master Juan Ignacio Morales built this unusual house. He did that to fulfill a wish of the girl he liked. The girl wanted to live in a sugar house. Of course, the building is not made of sugar, but fine building materials, elegant details, and almost weightless white stuccos create a fairytale look. The house was built in 1690. The girl was very pleased to receive such a wedding gift and she was living in this house until her death. 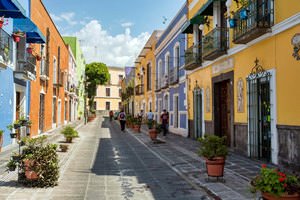 Nowadays, there is a museum open in the House of Sugar. The opening of the venue took place in 1926. The numerous halls of the museum exhibit different artworks that give a thoughtful insight into the historic and cultural development of Puebla starting from the arrival of the Spanish in the Mexican land. The museum’s collection features more than five hundred artifacts scattered among nineteen halls. Some halls feature textiles, and some halls exhibit paintings of prominent historic personalities. There is a hall with sculptures, various books, and documents of the previous centuries.
There is an airport twenty-three kilometers from the city. This is a backup air gate of Mexico City. That being said, it is still more comfortable to fly to the capital of the country first. Mexico City has a large airport that receives numerous international flights every day. After that, get on a bus to the “cradle of Mexican Baroque”. The ride lasts almost one hour. Multiple minibusses connect the two cities. The journey time is roughly the same, but the ticket price is significantly cheaper.
This guide to iconic landmarks and sights of Puebla is protected by the copyright law. You can re-publish this content with mandatory attribution: direct and active hyperlink to www.orangesmile.com.

City tours, excursions and tickets in Puebla and surroundings

Shopping streets in Puebla
♥   Shopping area ' Angelópolis' Puebla, 0 km from the center. On the map

National and city parks around Puebla
♥   National Park 'Molino de Flores Netzahualcóyotl' , 84.7 km from the center. On the map

Sights around Puebla from our guide 'Extreme places on Earth' 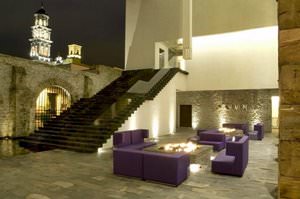 Distance from Puebla center - 1.4 km.
Several spacious outdoor terraces are equipped at the fashionable hotel. Guests of the hotel can relax by the fireplace on them in the evening. The most unusual recreation area is located on the roof of an industrial building. A beautiful swimming pool with glass walls was created here. A library is available in the hotel. It will appeal to fans of a cozy holiday. There is an on-site restaurant serving Mexican cuisine. La Purificadora is located near the Street of Candies. It is known for its historic bakeries and shops. Local confectioners sell handmade candies in them. There are interesting museums and architectural monuments in the vicinity of the hotel. … Read further

Search touristic sites on the map of Puebla

Sightseeing in regions nearby Puebla

Cuernavaca
As Cuernavaca doesn’t have an airport, tourists need to get to Mexico City. As a rule, foreign guests prefer to fly to this city first. After that, take a bus at the airport that will take you to Cuernavaca. The journey lasts roughly one hour. If you don’t like public transport, there are always many taxis near the airport. It will take half an hour to get to Cuernavaca ... Open »
Queretaro
For example, the first of the twelve halls with antiquities is dedicated to clocks. There are approximately forty different chronometers, including the models that were popular in England, America, France, and Germany. The museum’s collection features clocks from the seventeenth, eighteenth, and nineteenth centuries. Every month, the museum hosts various concerts and ... Open »
Acapulco
Travelers, who enjoy going to excursions, will also find much interesting in Acapulco. Here there are many museums and numerous historical and architectural sights. Municipal Square Zocalo is often called the historical heart of Acapulco. Here you will also find De la Soledad cathedral. In this historical part of the city you can also find Nuestra Señora de la Soledad, many ... Open »
Tampico
Those, who like fun excursions, should definitely go to the town named El Tyne, where have retained many historical monuments. This town has become famous because of amazing pyramids, the construction of which took place in the 9 - 13th centuries. According to one version of archaeologists the first settlers of this place have determined time with their help. The most striking ... Open »
Ixtapa
Not all countries have direct flights to Mexico. To get to Ixtapa, many tourists need to make a change in the airport of the United States or any large European country such as France or Germany. After that, fly to the Mexican capital. There are many domestic flights to the resort city, and the flight lasts only thirty-five minutes. It is also possible to get on a train to ... Open »
Guadalajara
Tourists will definitely remember Guadalajara by its buildings referred to the colonial period of XVI-XVIII centuries. The most interesting may become churches built in baroque style. The most famous of them are Santa Monica Church, San Francisco Church, arena for charreada Lienzo Charro, and museum of the state. Guadalajara is also a home place for birth of mariachi music ... Open »

All about Puebla, Mexico - sightseeings, attractions, touristic spots, architecture, history, culture and cuisine. Prepare your trip together with OrangeSmile.com - find out the 'must see' things in Puebla, which places to visit, which excursions to take, where the breathtaking views are waiting for you. Planning your trip with this travel guide will help your to get the most out of Puebla in few days.