Sightseeing in Guadalajara - what to see. Complete travel guide 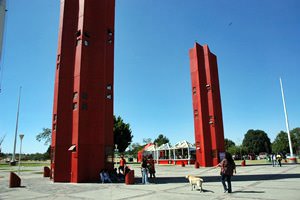 Guadalajara is a city located in Mexico, on the south-west of Mexican plateau. The city is an administrative center of Jalisco state. This name was got from the name of a town in Spain. The name can be translated as “the river flowing between mountains”. Guadalajara is often called a diamond of west and a city of roses. The population of the city estimates 1.646 million, making Guadalajara the second largest city of Mexico. The city was founded by the Spanish in 1513.
Best hotel choice for romantic escape, wedding or honeymoon in Guadalajara
Guadalajara will undoubtedly be a great place for a romantic getaway. One accommodation option that is very popular among couples is the fashionable Demetria Hotel. Located in the Lafayette …

Open
This is an economic center of west and north-west of Mexico. In Guadalajara are well-developed food, shoe, beer, chemical, and textile industries. Also here are created modern machine building and fertilizer creation factories. The city is a large transport junction as here cross important railway and auto routes. There are also a products pipe line and a gas pipeline here.
Tourists will definitely remember Guadalajara by its buildings referred to the colonial period of XVI-XVIII centuries. The most interesting may become churches built in baroque style. The most famous of them are Santa Monica Church, San Francisco Church, arena for charreada Lienzo Charro, and museum of the state. Copyright www.orangesmile.com
Shopping in Guadalajara - main shopping streets, outlets and boutiques
There are many stores in Guadalajara where clothes and shoes of excellent quality can be purchased at great discounts. A perfect example is Acuario footwear store, where Mustang brand …

Open
Guadalajara is also a home place for birth of mariachi music and a dance with hats. Here people started to drink tequila, wear sombrero and attend Mexican rodeo for the first time. The city is attractive for tourists because here you will find the same amazing entertainments that in Mexico – a lively culture, picture galleries and museums, amazing historical buildings, comfortable hotels with great service, delicious cuisine, and unforgettable night life. However, only in Guadalajara you can get all these without excessive noise that is so frequent in large urban cities. 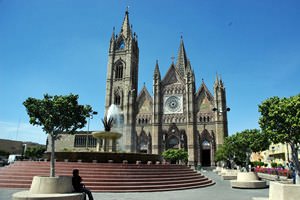 Some of the historical monuments of Guadalajara have been recognized as UNESCO World Heritage Sites, among them the Cabañas Cultural Institute. Originally, in this magnificent historical building was located a hospital, in which children and elderly people were treated. Today the building has been converted into a museum dedicated to the history and culture of the city, and part of the historic building is the chapel. The fine building is the most valuable monuments of architecture. The famous Mexican painter, Jose Clemente Orozca, worked on its design. Beautiful frescoes created by him have survived to this day.
Family holidays with kids in Guadalajara. How to entertain your child, things to show to children.
Guadalajara will pleasantly surprise travelers with children with a variety of entertainment. The Zoologico Gudalajara is very popular among holidaymakers. Here you can see both rare …

Open
There are many beautiful palaces in the city; one of the most notable is the Palacio Del Gobierno, located on the Plaza de Armas. Now in this palace, there is an interesting historical museum, and part of it was given for the needs of state institutions. Originally, the attractive palace served as the main residence of the President of Mexico. Its interior decoration was virtually intact and amazes with its luxury. Economical tourists will be pleased to learn that a walk through the halls of this beautiful palace is absolutely free. 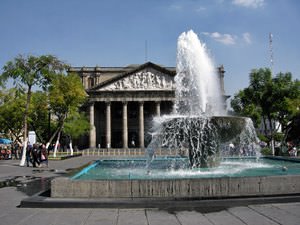 Not far from the palace, there is an interesting cultural institution - Museum of Tequila, Mescal and Mariachi. Here visitors are told the history of the appearance of popular national drinks. Among the exhibits of the museum, there are many interesting technical devices that were employed for their production. An obligatory part of the excursion is the tasting of popular varieties of tequila and mariachi. In the museum, there is a shop where you can buy gift sets of liked drinks.
Cuisine of Guadalajara for gourmet with top restaurants and cafe
Local restaurants traditionally offer their guests to try a lot of interesting local dishes. The menus of restaurants dedicated to the national cuisine will particularly please fans of meat …

Open
One of the most picturesque and bohemian places in the city can safely be said to be the Garden of Arts, which is a real open-air museum. Every day, there are exhibitions of local sculptors, artisans and artists in this picturesque garden. You can buy absolutely all the works you like. Also, the garden is used for celebrations and thematic events dedicated to national history and culture. 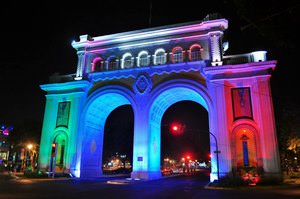 Walking enthusiasts love climbing the El Palomar Mountain. At its top is an excellent observation deck, from which a magnificent panoramic view of Guadalajara and its surroundings opens.

This guide to iconic landmarks and sights of Guadalajara is protected by the copyright law. You can re-publish this content with mandatory attribution: direct and active hyperlink to www.orangesmile.com.
Guadalajara - guide chapters 1 2 3 4 5 6 7 8 9 10 11 12 13

Shopping streets in Guadalajara
♥   Shopping area ' Andares' Guadalajara, 9.5 km from the center. On the map

National and city parks around Guadalajara
♥   City Park 'Liberación' , 3.6 km from the center. On the map

Sights around Guadalajara from our guide 'Extreme places on Earth' 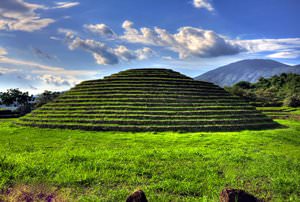 Distance from Guadalajara center - 52.5 km.
At present the district, on whose territory the unique pyramid and 9 similar buildings are located, is regarded as the place of the world. It is noteworthy that in the archaeological district, the Tequila was built earlier, which still produces the national drink. The unusual step-like pyramid of the regular round shape surrounded by harmonious mountain landscapes looks incredibly impressive. Recently, the historical monument has been specially maintained and protected by the state. Many pyramids, including the largest Guachimontones pyramid are very dilapidated. … Read further

Search touristic sites on the map of Guadalajara

Sightseeing in regions nearby Guadalajara

Puerto Vallarta
The majority of hotels are located along the coast. Almost all hotels have several restaurants and chain stores, as well as swimming pools and recreational facilities for children. Playa Mismaloya is considered the most popular and fashionable beach of this city. This place has become famous due to the "The night of the Iguana" movie. Several scenes in this movie were filmed ... Open »
Queretaro
The first monks arrived in Queretaro in 1530. Initially, these were the Franciscans who tried to convert local people to Christianity. They built the first churches and monasteries in the region. Later, the Jesuits joined them. Santiago de Queretaro officially became a town only in 1606. Forty-nine years later, the population of Queretaro consisted exclusively of the Spanish. ... Open »
Ixtapa
What else can tourists do in Ixtapa? Naturally, vacation is not only about beaches. The resort’s territory is a picturesque place with gorgeous flora. As local nature is really beautiful, it is always interesting to make exciting excursions in the Mexican coast or try camping in the region. For tourists, this is a unique opportunity to learn more about local wild nature, ... Open »
Mazatlan
Are you in search of high waves? Cerritos has a strong water current with big ocean barriers. That being said, this beach is suitable for experienced surfers only. Don’t forget that ocean waves here can be up to several meters high, and there are no rescue teams or instructors at the beach. However, this is not the only peculiarity of Cerritos. Vacationers can try horseback ... Open »
Mexico City
Museo Frida Kahlo. Museo Frida Kahlo is located in the former house of a mysterious and original artist Frida Kahlo. She lived in this house together with her husband Diego Rivera. The museum displays personal items of the artist - her jewelry, unfinished canvases on easels, and her wheelchair that stands in the studio where she painted. Besides Frida Kahlo paintings the ... Open »
Cuernavaca
Nowadays, this is a gorgeous building with elements of modern church design. During its long history, the cathedral was restored a number of times, and each restoration brought new details to the building. The latest changes to the look were added in 1957. Almost all elements of décor were replaced with the new ones, so it is hard to imagine now how the cathedral originally ... Open »

All about Guadalajara, Mexico - sightseeings, attractions, touristic spots, architecture, history, culture and cuisine. Prepare your trip together with OrangeSmile.com - find out the 'must see' things in Guadalajara, which places to visit, which excursions to take, where the breathtaking views are waiting for you. Planning your trip with this travel guide will help your to get the most out of Guadalajara in few days.