Sightseeing in Tampico - what to see. Complete travel guide 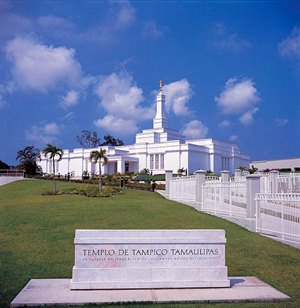 This city is located in Tamaulipas state and is known as a center of production of oil, copper and silver. Tampico got the status of the city in 1823. Prior to this it was considered a small settlement, which inhabitants were mainly involved in agriculture.
Since the city is located in a truly picturesque location on the coast of the Persian Gulf, it has quickly begun attracting the attention of travelers. Picturesque beaches and rich nature are ideal for relaxation, while mild climate of the region makes the "velvet" season pretty long. Today there are several large bustling beaches near the center of the city. If you want to have rest in silence in solitude, choose a hotel complex near a cozy distant bay. Beach rest here is organized at the highest level possible. Tourists have an opportunity to stay on the coast all day long because nearby they will find numerous high quality restaurants and entertainment venues, as well as a network of shops and lovely parks where they can shelter from the scorching sun.
Those, who like fun excursions, should definitely go to the town named El Tyne, where have retained many historical monuments. This town has become famous because of amazing pyramids, the construction of which took place in the 9 - 13th centuries. According to one version of archaeologists the first settlers of this place have determined time with their help. The most striking architectural monuments are located in the region named Queretaro. Here the majority of buildings were built in the 17th - 18th centuries. The city is also home to many old buildings. Nowadays first floors of these old homes have been turned into open air restaurants and hotels, which make the resort even more cozy and romantic. Copyright www.orangesmile.com
Catedral de la Inmaculada Concepción is a fabulous architectural monument in a classical style. It stands in the very center of the city. Over the years, the church managed to preserve the facade decoration with a fancy mosaic in its upper part. The old clock tower is also preserved there. The tower is rather high and serves as a kind of a guide for tourists whilst out hiking. The reconstruction of the church was completed not so long ago. It was redecorated. 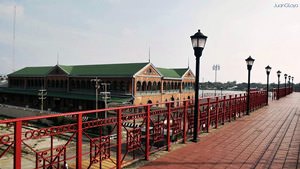 There are many historical buildings in the city. They are found in nearly any area. The most beautiful ones are buildings of the old telegraph and the house of Gandar, which amazes with its majestic appearance. The old La Campa castle, built hundreds of years ago to protect the coastal area from the conquerors, has been partially preserved to this day.
Of particular interest are the historic buildings that remained in commercial areas. Today, many of them house popular restaurants and hotels. Tourists have an opportunity to admire their appearance and appreciate the interior. 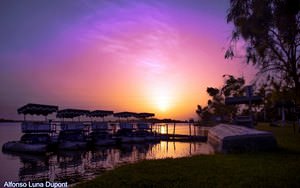 Laguna del Carpintera enjoys great popularity among lovers of hiking and outdoor recreation. A picturesque promenade with numerous monuments and entertainment facilities passes therealong. Swimming is forbidden in that area since it is inhabited by crocodiles. Tourists and local residents prefer to walk at a safe distance or ride bicycles. There are several equipped picnic areas, as well. A beautiful panoramic view of the bridge opens from the embankment.
No less attractive place for a stroll is Las Escolleras pier. There is an old lighthouse on its endpoint. Here, you can admire huge ships sailing by, and feed clever raccoons, which are multiple in the area. In the evening, many attractive restaurants and bars are open near the pier. This district is considered one of the most romantic in the city. The most spectacular pictures can be done in the morning when the number of tourists walking down the beach is not so great.
This guide to iconic landmarks and sights of Tampico is protected by the copyright law. You can re-publish this content with mandatory attribution: direct and active hyperlink to www.orangesmile.com.

City tours, excursions and tickets in Tampico and surroundings

National and city parks around Tampico
♥   National Park 'Insurgente Miguel Hidalgo y Costilla' , 10.4 km from the center. On the map

Search touristic sites on the map of Tampico

Sightseeing in regions nearby Tampico

Queretaro
The first monks arrived in Queretaro in 1530. Initially, these were the Franciscans who tried to convert local people to Christianity. They built the first churches and monasteries in the region. Later, the Jesuits joined them. Santiago de Queretaro officially became a town only in 1606. Forty-nine years later, the population of Queretaro consisted exclusively of the Spanish. ... Open »
Mexico City
Museo Frida Kahlo. Museo Frida Kahlo is located in the former house of a mysterious and original artist Frida Kahlo. She lived in this house together with her husband Diego Rivera. The museum displays personal items of the artist - her jewelry, unfinished canvases on easels, and her wheelchair that stands in the studio where she painted. Besides Frida Kahlo paintings the ... Open »
Puebla
The favorable location helped the city to become an important economic and cultural center within a short time. The population of Puebla was growing, and the economy of the state was flourishing. The city was growing in size, and so many churches and monasteries appeared in it. The following centuries were the “golden age” for the Mexican city as its production sector was ... Open »
Cuernavaca
In order to relax and enjoy pleasant coolness in the midst of a hot day, visit Garden Borda. This popular area frequently hosts various performances and music concerts. Nowadays, this is a public recreation area, but the garden was the residence of the Habsburg Emperor Maximilian at the beginning of the 18th century. The park still has an old botanic garden with many plants ... Open »
Monterrey
Due to the fact that the local landscape is mostly a desert punctuated by canyons and mountain slopes, the resorts of Monterrey organize a large number of sport entertainments. You can rent a bike and make a ride to the mountains, drive a jeep through the desert, or simply explore the local beauty on foot. The central square called Marco Plaza is not only the most remarkable ... Open »
Guadalajara
Tourists will definitely remember Guadalajara by its buildings referred to the colonial period of XVI-XVIII centuries. The most interesting may become churches built in baroque style. The most famous of them are Santa Monica Church, San Francisco Church, arena for charreada Lienzo Charro, and museum of the state. Guadalajara is also a home place for birth of mariachi music ... Open »

All about Tampico, Mexico - sightseeings, attractions, touristic spots, architecture, history, culture and cuisine. Prepare your trip together with OrangeSmile.com - find out the 'must see' things in Tampico, which places to visit, which excursions to take, where the breathtaking views are waiting for you. Planning your trip with this travel guide will help your to get the most out of Tampico in few days.