Sightseeing in Cuernavaca - what to see. Complete travel guide 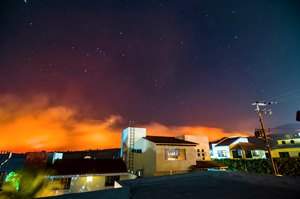 Central Mexico is famous for its beautiful capital of Morelos State – the city of Cuernavaca. This city with a population of more than 300,000 people is rich in architectural landmarks. Mother Nature was also generous to this land, giving it many interesting attractions. Many Hollywood stars built mansions here, craving for complete silence and serenity in a beautiful setting. The weather is always warm and comfortable here, and this is the reason why Cuernavaca got its informal nickname – the City of Eternal Spring. There are no temperature fluctuations in this area, so nothing can spoil your vacation in Cuernavaca.
The Tlahuica civilization was the first group of people who permanently settled in the area of modern Cuernavaca in the 12th century. Xolotl, the ruler of Texcoco, conquered the Valley of Mexico in the 12th century. Until the 16th century, the American Indian settlement endured multiple attacks from the north. In 1521, conquistadors under the guidance of Hernan Cortes burned down the Indian settlement and established a town. They built a beautiful palace and a church. Cuernavaca was developing quickly since that time. Eight years after the invasion of conquistadors, the fifth monastery appeared in Cuernavaca. One year later, Hernan Cortes settled down in the town and made Cuernavaca his residence.
The importance of the city was increasing year after year, turning Cuernavaca into a rich Spanish settlement. However, it officially got the town status only in the 30s of the 19th century. During the war of the United States with Mexico, the Cadwalader Brigade captured the city. In 1854, the Ayutla Rebellion emerged in the region. After that conservator Santa Anna was driven out of Mexico City. He moved to Cuernavaca and made the city the capital of Mexico. In the second half of the 19th century, Cuernavaca became the capital of Morelos State. Copyright www.orangesmile.com
Do you want to get acquainted with beautiful landmarks of the city? Start your journey with a visit to the cathedral built in the name of Our Lady at the beginning of the 16th century. The main purpose of this building was to increase the number of Christians among the local people. In the 18th century, the beautiful building was a church. It received the status of a cathedral only in the 19th century. 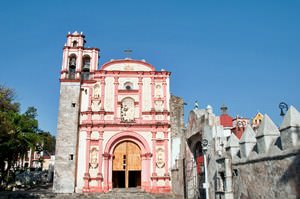 Nowadays, this is a gorgeous building with elements of modern church design. During its long history, the cathedral was restored a number of times, and each restoration brought new details to the building. The latest changes to the look were added in 1957. Almost all elements of décor were replaced with the new ones, so it is hard to imagine now how the cathedral originally looked like in the past. Numerous 16th-century frescos are the only thing that reminds of the past of this cathedral. The beautiful frescos almost entirely cover walls of the church.
The Palace of Cortés is one more attraction in Cuernavaca that definitely deserves the attention of tourists. In 1526, Hernan Cortes ordered his people to build a castle. He settled down in that castle and made it his residence. Cortes spent many years in the castle together with his wife who was the second wife of the famous conquistador. The heir of Hernan Cortes, Martin, was also born in this palace. In the 18th century, the building was transformed into a prison and army barracks. 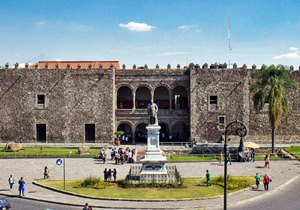 It was decided to restore the Palace of Cortes only at the end of the 19th century. This restoration brought a new tower to the palace complex. The cylindrical tower is 15 meters tall. It was added to the north-western part of the building. Starting from the 70s of the 20th century, the building has been home to a museum - El Museo Regional Cuauhnáhuac. This is the right place to visit for everyone who wants to learn more about the history of the region starting from its formation and until modern times. Many exhibitions feature findings of local archaeologists.
In order to relax and enjoy pleasant coolness in the midst of a hot day, visit Garden Borda. This popular area frequently hosts various performances and music concerts. Nowadays, this is a public recreation area, but the garden was the residence of the Habsburg Emperor Maximilian at the beginning of the 18th century. The park still has an old botanic garden with many plants from different parts of the world. Besides that, there are many fruit trees of different types and species. 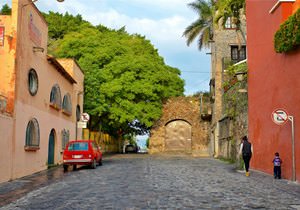 As Cuernavaca doesn’t have an airport, tourists need to get to Mexico City. As a rule, foreign guests prefer to fly to this city first. After that, take a bus at the airport that will take you to Cuernavaca. The journey lasts roughly one hour. If you don’t like public transport, there are always many taxis near the airport. It will take half an hour to get to Cuernavaca by taxi.
This guide to iconic landmarks and sights of Cuernavaca is protected by the copyright law. You can re-publish this content with mandatory attribution: direct and active hyperlink to www.orangesmile.com.

City tours, excursions and tickets in Cuernavaca and surroundings

Survived castles around Cuernavaca
♥   Castle 'Palace of Cortés' Cuernavaca, 1.3 km from the center. On the map

♥   Castle 'Chapultepec Castle' Mexico City, 55.3 km from the center. On the map

National and city parks around Cuernavaca
♥   National Park 'Cumbres del Ajusco' , 27.7 km from the center. On the map

Sights around Cuernavaca from our guide 'Extreme places on Earth' 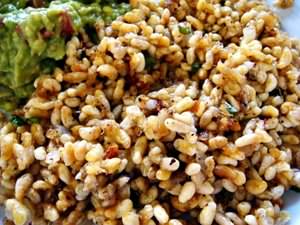 Distance from Cuernavaca center - 56.4 km.
Locals call this delicacy the ant’s caviar.  At the beginning of summer, it can be purchased at many Mexican markets. Some ant eggs are frozen, so in course of the year they can be bought in supermarkets. You can eat escamoles both raw and roasted. After been fried, eggs gain the texture of a cottage cheese. The taste of food is quite nice and a bit like butter with a delicate nutty flavor. It’s also worth noting that ant eggs turn to be a very health-keeping dish. They help strengthening the immune system. Ant eggs have high antioxidant effect and allow you to stay young for longer. … Read further 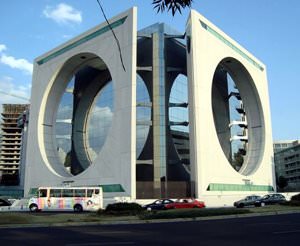 Distance from Cuernavaca center - 51.4 km.
The washing machine building is a location of the modern offices and the excellently furnished apartments. The high-rise was equipped with the ultramodern supply systems, which are fully automated. The Calakmul skyscraper is worth seeing for all the tourists who are interested in modern technology and are looking forward to seeing the unusual sights in the excursion program. … Read further

Search touristic sites on the map of Cuernavaca

Sightseeing in regions nearby Cuernavaca

Mexico City
Museo Frida Kahlo. Museo Frida Kahlo is located in the former house of a mysterious and original artist Frida Kahlo. She lived in this house together with her husband Diego Rivera. The museum displays personal items of the artist - her jewelry, unfinished canvases on easels, and her wheelchair that stands in the studio where she painted. Besides Frida Kahlo paintings the ... Open »
Puebla
Nowadays, there is a museum open in the House of Sugar. The opening of the venue took place in 1926. The numerous halls of the museum exhibit different artworks that give a thoughtful insight into the historic and cultural development of Puebla starting from the arrival of the Spanish in the Mexican land. The museum’s collection features more than five hundred artifacts ... Open »
Queretaro
For example, the first of the twelve halls with antiquities is dedicated to clocks. There are approximately forty different chronometers, including the models that were popular in England, America, France, and Germany. The museum’s collection features clocks from the seventeenth, eighteenth, and nineteenth centuries. Every month, the museum hosts various concerts and ... Open »
Acapulco
When it comes to having fun, we simply must mention wide selection of beach zones. If you search for a classic beach, then take a look at Caletilla beach, which ideally suits family rest purposes as sea here is very calm. If you seek solitude, then the best choice for you will be La Roqueta Island. You can reach it on a small boat with glass bottom. The road to the island is a ... Open »
Ixtapa
The beach resort of Ixtapa was established in the 70s of the 20th century. The country’s government started a new development program for resort destinations on the Mexican coast. Until that time, there was simply a small village on the site of Ixtapa, and local people were mostly fishermen. Once the government paid its attention to this region and decided to turn the ... Open »
Tampico
Since the city is located in a truly picturesque location on the coast of the Persian Gulf, it has quickly begun attracting the attention of travelers. Picturesque beaches and rich nature are ideal for relaxation, while mild climate of the region makes the "velvet" season pretty long. Today there are several large bustling beaches near the center of the city. If you want to ... Open »

All about Cuernavaca, Mexico - sightseeings, attractions, touristic spots, architecture, history, culture and cuisine. Prepare your trip together with OrangeSmile.com - find out the 'must see' things in Cuernavaca, which places to visit, which excursions to take, where the breathtaking views are waiting for you. Planning your trip with this travel guide will help your to get the most out of Cuernavaca in few days.