Sightseeing in Queretaro - what to see. Complete travel guide 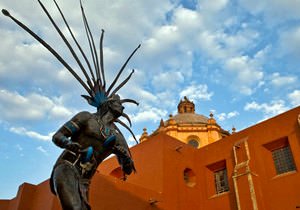 Santiago de Queretaro is the capital of the Mexican state of Queretaro. However, as the name of this city is quite long, many people prefer to simply call it Queretaro City. At a glance, this is quite a silent and tranquil settlement with a steady and peaceful lifestyle. In reality, Queretaro City is a vibrant and energetic settlement that charms and attracts foreign guests. If asked to describe the city in just a couple of words, then Queretaro City is a labyrinth of winding cobbled streets, numerous churches, and colorful two-story buildings.
The first settlers appeared in this region approximately in 200 AD. These were Mesoamerican peoples. During the Classic Period, there were two settlements in the area, namely, Toluquilla and Ranas. Several centuries later, the Otomi people settled in the territory of modern Queretaro, forming the Otomi Nation or the Otomi State. The Aztecs captured the region in the 40s of the 15th century. Hernán Pérez Bocanegra y Córdoba from Spain arrived in this land on July 23rd, 1531. Bocanegra is considered the founder of the settlement called Santiago de Queretaro. The town was developing slowly because of the constant attacks of the aboriginal tribes. This fact significantly slowed down the development of Queretaro compared to other towns in the state.
The first monks arrived in Queretaro in 1530. Initially, these were the Franciscans who tried to convert local people to Christianity. They built the first churches and monasteries in the region. Later, the Jesuits joined them. Santiago de Queretaro officially became a town only in 1606. Forty-nine years later, the population of Queretaro consisted exclusively of the Spanish. Other nations had to leave this town. Over the course of seven years, starting from 1810, the fierce battle for independence took place in Queretaro. When the war ended Queretaro was the capital of Mexico until 1823. Copyright www.orangesmile.com
Nowadays, this region is widely popular among tourists thanks to the rich architectural heritage of this city. The city is home to one of the major religious landmarks – the Queretaro Cathedral or the St. Philip Neri Cathedral that was built and consecrated in the name of Saint Philip Neri. The first church on this site appeared yet in 1786. It took eighteen years to build it. During the colonial period, the shrine was rebuilt several times. That is why an experienced traveler will quickly notice elements of Baroque and Neoclassic styles in the look of the cathedral. 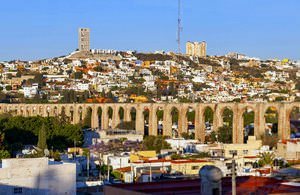 The Queretaro Cathedral is built from the unusual materials that have a volcanic origin. The gorgeous church consists of one nave, a beautiful cupola, and a tower. A bas-relief with the image of Saint Philip Neri decorates the façade of the main church in Queretaro. The inner décor of the cathedral is modest and elegant at the same time. The central altar definitely deserves a closer look – it is decorated with the bas-relief images of the apostles. The ceiling features multiple religious scenes.
Do you enjoy visiting museums? In Queretaro, tourists can visit the Zacatecana House Museum. This is a true “home” of Mexican painting and applied arts. Nowadays, the exhibited collection offers visitors to make a journey back to the seventeenth century. The Zacatecana House Museum exhibits antique furniture, paintings, glassware, and ceramics of that period. Besides antique treasures, there are modern masterpieces. The museum’s collection is so big and diverse that it required several halls, each of which exhibits items of a similar type. 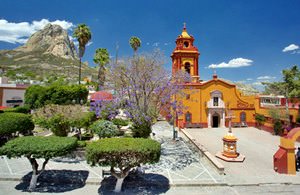 For example, the first of the twelve halls with antiquities is dedicated to clocks. There are approximately forty different chronometers, including the models that were popular in England, America, France, and Germany. The museum’s collection features clocks from the seventeenth, eighteenth, and nineteenth centuries. Every month, the museum hosts various concerts and scientific seminars that bring together historians and archaeologists who come to share their knowledge and discoveries. If you want to learn more about the history of the region, check out the schedule of the coming events and masterclasses in the museum.
It is possible to get to Queretaro City from Mexico City. There are daily buses to the capital of the Queretaro State. It will take approximately three hours to reach the city. At the Queretaro bus station, simply catch a taxi to your hotel. As there are no direct flights to Queretaro from most European countries, travelers can fly to Mexico City first and then take a domestic flight to this city. By the way, most tourists have to take a connecting flight to Mexico City with a stop in a large European or American city.
This guide to iconic landmarks and sights of Queretaro is protected by the copyright law. You can re-publish this content with mandatory attribution: direct and active hyperlink to www.orangesmile.com.

City tours, excursions and tickets in Queretaro and surroundings

National and city parks around Queretaro
♥   National Park 'Cerro de Las Campanas' , 2.2 km from the center. On the map

Sights around Queretaro from our guide 'Extreme places on Earth' 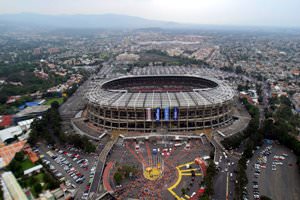 Distance from Queretaro center - 192.9 km.
The unique stadium is not only very nice, but also is very comfortable. It is so situated that the sun crosses the playing field vertically and does not disturb the athletes during the games. The spectators can watch the sporting events in a very comfortable atmosphere as the sunroof protects them from the hot sun and the storm. The visitor record of the Aztec Stadium was set up in 1968. At that time, 119 853 sports fans came to the stadium to watch the match between Brazil and Mexico. … Read further 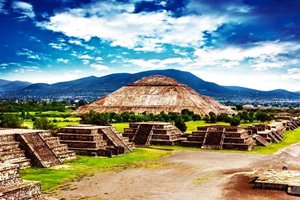 Distance from Queretaro center - 189.9 km.
The center of the pre-hispanic city of Teotihuacan is the Citadel. That’s a huge internal space that can host up to 100 000 people. Around the square there are several pyramids. The Pyramid of the Sun and Pyramid of the Moon are main ones among them. During archaeological research, scientists were able to discover a lot of valuable artifacts, including ritual paraphernalia, household items, and ancient Mayan masks. A significant part of the artifacts are presented today at the National Museum of Anthropology situated in Mexico City. … Read further

Search touristic sites on the map of Queretaro

Sightseeing in regions nearby Queretaro

Mexico City
Castillo de Chapultepec. Castillo de Chapultepec was built between 1780 and 1790 on the site of an Aztec fort. The castle provides beautiful panoramic views of the city. The gardens that surround the castle are designed by Empress Carlotta herself. Initially, the building was occupied by Military Academy, and then it served as an official royal residence. In 1939, by order ... Open »
Cuernavaca
As Cuernavaca doesn’t have an airport, tourists need to get to Mexico City. As a rule, foreign guests prefer to fly to this city first. After that, take a bus at the airport that will take you to Cuernavaca. The journey lasts roughly one hour. If you don’t like public transport, there are always many taxis near the airport. It will take half an hour to get to Cuernavaca ... Open »
Puebla
Would you like to see a real treasure of Baroque style? In Puebla, tourists can visit the House of Sugar or Museo Casa del Alfenique. According to a local legend, the blacksmith master Juan Ignacio Morales built this unusual house. He did that to fulfill a wish of the girl he liked. The girl wanted to live in a sugar house. Of course, the building is not made of sugar, but ... Open »
Guadalajara
This is an economic center of west and north-west of Mexico. In Guadalajara are well-developed food, shoe, beer, chemical, and textile industries. Also here are created modern machine building and fertilizer creation factories. The city is a large transport junction as here cross important railway and auto routes. There are also a products pipe line and a gas pipeline here. ... Open »
Tampico
Those, who like fun excursions, should definitely go to the town named El Tyne, where have retained many historical monuments. This town has become famous because of amazing pyramids, the construction of which took place in the 9 - 13th centuries. According to one version of archaeologists the first settlers of this place have determined time with their help. The most striking ... Open »
Ixtapa
Not all countries have direct flights to Mexico. To get to Ixtapa, many tourists need to make a change in the airport of the United States or any large European country such as France or Germany. After that, fly to the Mexican capital. There are many domestic flights to the resort city, and the flight lasts only thirty-five minutes. It is also possible to get on a train to ... Open »

All about Queretaro, Mexico - sightseeings, attractions, touristic spots, architecture, history, culture and cuisine. Prepare your trip together with OrangeSmile.com - find out the 'must see' things in Queretaro, which places to visit, which excursions to take, where the breathtaking views are waiting for you. Planning your trip with this travel guide will help your to get the most out of Queretaro in few days.