Fun and festivities in Mexico - celebrations, festivals and cultural events 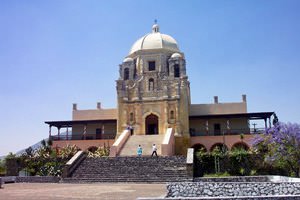 Mexico is incredibly rich in holidays, both public and unofficial. It may seem that people are celebrating all year round here. From December 16th to 24th, there is “Las Posadas” holiday combining the traditions of Spanish Catholics and Aztecs. The latter honored the sun god Huītzilōpōchtli these days, while the Catholic holiday marks the nine-day journey of Mary and Joseph to Bethlehem. On each of these nights, a little boy and girl dressed like Joseph and Maria ride a donkey through the streets, knocking on the doors with a song but chased away according to the tradition. When children find a hospitable home, a holiday feast is arranged. Fruit punch is very popular during this period.
Things to do in Mexico - active leisure
Mexican cities never sleep. The night here has its own special colors and shades, and nightlife is energetic and incendiary. One of the most popular …
Read further
Christmas is celebrated on the night of December 25th. Huge richly decorated Christmas trees are put up on the main squares of Mexican cities. Mexicans dress their home trees, gather with their families at a festive table, and then go out to celebrate on the streets where fireworks are launched. Everywhere you can see red spurge flowers. December 28 is the Day of the Holy Innocents very similar to April Fools' Day. On this day, you cannot believe a word other people say, and naive "victims" of jokes are usually called "innocent doves".
Mexicans start celebrating New Year on December 31 and continue on January 1. On the morning of December 31, locals clean their homes and sweep dirt out of the door, symbolizing a farewell to all the bad things that happened in the past year. Lentils are hung on the door to attract wealth. With the evening approaching, celebrants turn on the lights in each room of their houses, which symbolizes light beginnings of the coming year. Then all sit down at a table with lit candles put among a variety of dishes. When the clock strikes, it is customary to eat one grape with every stroke. People hoping for a promotion at work should stand on a chair. To attract money, many people put coins in their shoes or lottery tickets in their wallets. Copyright www.orangesmile.com
What you need to know about Mexico prior to visit - advices
1. Going to Mexico, one needs to learn some basic phrases ("hello", "please", "thank you", "excuse me", "goodbye" and so on). Even if words are …
Read further
On Epiphany, also known as Three Kings' Day, January 6, locals eat Rosca de Reyes. This is a festive sweet bread baked with a figurine of the Christ child inside. The one who gets this figurine with a piece of bread is considered blessed; now he/she must invite others to dinner. This bread is usually baked at home, but it can also be found in some stores. Constitution Day falls on the first Monday of February, celebrating the adoption of the Constitution in 1917. Parades with marches and orchestras are held all over the country, in large cities buildings are decorated with green and red flags. Many shops are closed on this day. 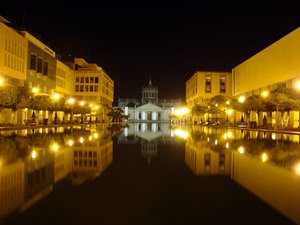 Love and Friendship Day is celebrated on February 14. As the name suggests, on February 14, Mexicans pay attention not only to lovers but also friends. To this day, many shops, cafes and other places are decorated in red: with flags, balloons, flowers, hearts. Lots of flowers and chocolate are sold. In the evening, many men come to their ladies' windows with a trio of traditional musicians wearing sombreros and singing love songs with them. The following special days are not public holidays but celebrated by Mexicans: April 30 - Children's Day, May 10 - Mother's Day, May 15 - Teacher's Day, May 23 - Students' Day, the third Sunday of June - Father's Day.
What to see and what to visit in Mexico with children
For tourists traveling with children, Mexico offers a large selection of entertainment and educational activities. It's worth to check out the …
Read further
Halloween is celebrated on October 30. People dress up in ghosts and monsters and enjoy sweets. The world-famous All Saints Day is celebrated on November 1. It is believed that on this day the souls of dead children come to the world of the living, and on November 2, on the equally popular Day of the Dead, adults' souls return to our world. On November 1, Mexicans groom children's graves, decorating them with flowers and candles. At the end of October, sweets and other goods in the shape of skulls, coffins, skeletons and other symbols of death are sold in stores. Sweet painted skulls are especially popular. On November 2, people decorate graves of adults, organize parties with national dishes. In many houses, altars with candles, photographs, and food in memory of the dead are arranged. 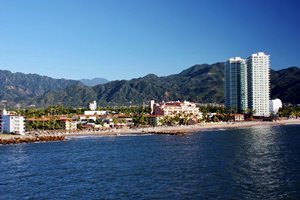 Music festivals are very popular in Mexico. Corona Capital is an annual rock festival in Mexico City attracting performers from different countries. In 2017, such bands as Green Day and Foo Fighters played at the festival. Hell & Heaven Metal Fest is held every spring or autumn in the capital. Jazz fans should not ignore Riviera Maya Jazz Festival held in Playa del Carmen every November. Those wishing to listen to folk music are recommended Guelaguetza taking place in July in Oaxaca where traditionally dressed people dance, sing, and enjoy Mexican food.

This article about national fests and celebrations of Mexico is protected by the copyright law. You can re-use the content, but only under the condition of placement of an active link to www.orangesmile.com.
Mexico guide chapters 1 2 3 4 5 6 7 8 9 10 11 12 13 14 15 16 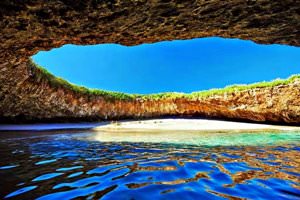 This beach is located on the Mexican island of Marieta. Playa del Amor can be considered one of the most amazing and unique in the world because of its special structure. Playa del Amor is often called the hidden beach. Really, it is almost completely hidden from prying eyes by a natural canopy. Marieta Island is uninhabited. It has been formed many hundreds of years ago by a volcanic activity.

The coastal part of the island is literally covered with a hollow shell. The unique Playa del Amor has formed in the place of the occasional crack in that shell. It's not so easy to find and reach this secluded beach. It's necessary to swim through the tunnel, which is the natural entrance to the cave. It is noteworthy, that a hundred years ago, the Mexican government used Marieta Island as a … Read all 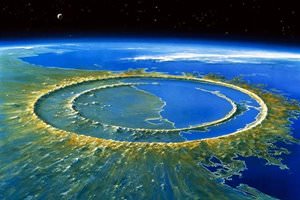 Chicxulub crater in Mexico, Yucatan Peninsula, was formed as a result of a meteorite crush about 65 million years ago. Chicxulub is quite young in comparison with other large craters of our planet. According to scientists, this catastrophe could have been the cause of the partial or complete extinction of dinosaurs. The disaster had a huge scale. Researchers suggest that a fallen meteorite could have caused a tsunami with waves up to 100 meters high.

A dust cloud around the planet blocked the sunlight and, so, the air temperature on the Earth has gone down dramatically. It’s now incredibly difficult to determine the extent of the disaster, as well as the size of the original crater. Over millions of years, an erosion and other geological factors were constantly changing the meteorite … Read all
All unique sightseeing Mexico

Attractions and entertainment in top cities of Mexico

Playa del Carmen
Traveler practicing yoga will find a perfect place to rest and recreate on the resort as well. The Yoga By the Way health center will be an excellent place for healthy lifestyle followers. The center offers its visitors a great choice of recreational therapies. Some classes are held in the open air. The most renowned park of the resort is considered to be the Xcaret Eco Theme Park which is located on the territory of a scale reservation of the same name. The park is equipped with a variety of … Read more

Mexico City
The popular Rexo club is a large building, on three stores of which you will find large dance floors, a cozy bar and a lounge. In addition to this, the ground of the club is the location of a wonderful restaurant, where you can relax from loud music and enjoy culinary delights made by local chefs. When it comes to music directions, they follow each other literally every day. Cafeina club is decorated in the Brazilian style. This place will be liked by fans of samba and salsa, as well as by … Read more

Cancun
In addition to beach activities, Cancun offers its guests to attend numerous sports clubs and golf centers. In this city visitors will find playgrounds for children, modern gym, and of course numerous tennis courts. A significant part of night clubs, discos and bars is located near beaches. As a rule, during the daytime such establishments work as usual cafes, and in the evening they prepare special entertainment programs and delicacies for their guests. No description of Cancun is possible … Read more

Guadalajara
Guadalajara is also home to some really great amusement parks, where both adults and children are welcome to have a good time and enjoy numerous funny and exciting attractions. The most popular parks of the city are Selva Magica, Natural Adventure and Las Botas Extraviadas. Each of these parks is decorated in a unique style and offers its guests to participate in a unique entertainment. Tobolandia and Agua Caliente water parks feature a rich choice of pools and water slides. In order to make … Read more

Acapulco
The most popular city beaches are Caleta and Icacos. They are perfectly suited for family rest. Fans of outdoor activities may fall in love with Tamarindo beach that is surrounded by rich thickets of exotic plants. Puerto Marquez beach is a wonderful choice for recreation and water activities. Despite the fact that the length of the beach is just over a kilometer, its territory is equipped with a large number of playgrounds and sports clubs. There is also a diving school, as well as several … Read more

Monterrey
The zoological park Bioparque Estrella is another interesting spot for nature lovers. Not only is it indescribably beautiful, but it also is a habitat for rare animals. This park is home to a large population of elephants, rare birds, and other exotic creatures. The habitat for animals here is as close as possible to natural, so it's really captivating to observe their behavior. A considerable percentage of visitors to this park are locals and tourists with children. There are several … Read more

Merida
A wide choice of facilities is offered to fans of water entertainment - there are several large water parks in the city. Acuatico Baxal Ja is considered one of the best. This water park is outdoor and occupies a vast area. Visitors can enjoy huge pools with colorful slides, spacious sunbathing terraces, as well as many playgrounds for children of any age. Special small pools with fountains are equipped in the water park for small visitors. It will be comfortable to relax here even with … Read more

Map of fun in Mexico