Sightseeing in Mazatlan - what to see. Complete travel guide 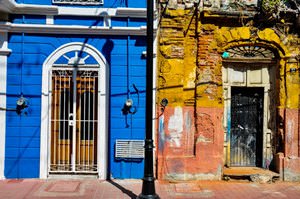 In the Mexican state of Sinaloa, travelers can visit a truly picturesque and fabulous resort – Mazatlan. This area can offer gorgeous nature, clean beaches, and warm temperatures all year round. Thanks to all these natural attractions, Mazatlan is frequently called “the treasure of the Pacific”. Tourists agree that this is one of the best Pacific resorts in Mexico. Mazatlan has always attracted vacationers with its “pleasant” prices, and this is one of the reasons for the continuously growing popularity of this resort. Come to Mazatlan to sunbathe on the coast of the Pacific Ocean, fish in a serene atmosphere, and explore the natural attractions of this region that have an enchanting effect on foreign guests.
In the past, there was a Native American settlement on the site of the modern city. Local tribes called their home Mazatlan, which means “the place of deer”. The indigenous people were mostly hunting deer and fishing to survive. The Spanish invaders captured the settlement in 1531. Despite such a drastic change, the settlement kept its original name. Soon, Spanish rulers turned an ordinary indigenous village into a true port town that quickly turned into an important stop and a major center of trade. In the 17th century, Mazatlan officially became the main port city of the country.
Mazatlan continued developing rapidly due to frequent shipments of gold and other treasures to numerous European countries. Due to its geographic position, which was strategically important at that moment, many countries tried to capture Mazatlan. In different periods of time, it belonged to the United States, the United Kingdom, and France. At the beginning of the 19th century, a prison opened in Mazatlan. The tourist industry started developing here only in the 50s of the 20th century. The first hotels and tourist establishments opened in Mazatlan. However, the crisis in the 70s and 80s of the previous century together with a devastating hurricane brought the city to a recession. Copyright www.orangesmile.com
Modern Mazatlan is famous for its beaches, and Playa Cerritos is one of the calmest and least crowded of them all. This is the longest beach in the northern part of the city. There are not many hotels and tourist objects here. Are you searching for a place where you can feel united with nature? Cerritos is the most suitable beach for tranquil recreation in Mazatlan. Guests of the Mexican city, as well as its residents, enjoy visiting Cerritos in the evening and admire the sunset. Viewers can see a mesmerizing panorama of the ocean horizon painted in different colors. 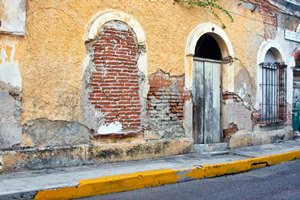 Are you in search of high waves? Cerritos has a strong water current with big ocean barriers. That being said, this beach is suitable for experienced surfers only. Don’t forget that ocean waves here can be up to several meters high, and there are no rescue teams or instructors at the beach. However, this is not the only peculiarity of Cerritos. Vacationers can try horseback riding or sip drinks in comfortable open-air restaurants.
Playa Brujas is another coastal area suitable for riding the waves. It is also situated in the northern part of the city. This is a popular destination for all fans of surfing. Waves can be up to ten feet tall, and the frequency of big waves is very high, so surfing near this beach is truly interesting and even thrilling. Rental offices, which are open right at the beach, offer everything needed for surfing. If you are not a fan of extreme sports, Brujas Beach is suitable for calm family recreation. Soft sand covers this coastal area, and the water is shallow near the beach, so kids can play and have fun safely here. 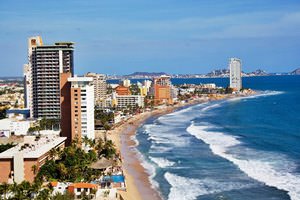 Playa Camaron or Camaron Beach is, perhaps, the most popular among vacationers. This beach is a part of the so-called “Golden Zone” of Mazatlan. Camaron is one of the most beautiful areas of the Mexican Pacific coast, so no wonder why there are so many hotels and restaurants here. Soft sand completely covers this beach, so it is possible to sunbathe on a towel, without a lounger. Waves are calm and small here, shining with a beautiful turquoise color in sun rays. Even high-rise buildings do not spoil the idyllic picture. Camaron is a beach that you will certainly want to return to.
This coastal area is always crowded. Sellers of shrimps and other seafood continuously offer Mexican sea delights to tourists. If you want, you can play beach volleyball or try other activities, such as surfing and scuba diving. That is why no one will feel bored here. Surprisingly, the beach is particularly crowded in the evening because many people come to admire the sunset. This beach offers an enchanting view of the ocean that is slowly swallowing the sun. This is also a perfect time to take some mesmerizing shots. 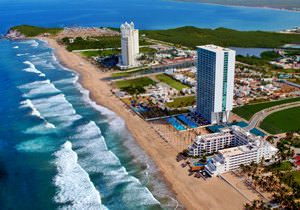 As a rule, tourists from Europe fly to the country’s capital, Mexico City, first. After that, take a domestic flight to Mazatlan, and you will reach the “treasure of the Pacific” in one hour and forty minutes. Having arrived at the airport in Mazatlan, it is possible to reach the city center by bus. The journey time is roughly twenty minutes.
This guide to iconic landmarks and sights of Mazatlan is protected by the copyright law. You can re-publish this content with mandatory attribution: direct and active hyperlink to www.orangesmile.com.

City tours, excursions and tickets in Mazatlan and surroundings

National and city parks around Mazatlan
♥   State Park 'Cerro El Faro' , 7.7 km from the center. On the map

Search touristic sites on the map of Mazatlan

Sightseeing in regions nearby Mazatlan

Puerto Vallarta
The city is simply soaked in the atmosphere of antiquity. On the small streets of Puerto Vallarta you will see small white houses with red tiled roofs, cozy restaurants and shopping pavilions. There are no large and noisy streets filled with traffic and crowds of citizens. Harmony and peace are felt throughout the city. The best season for tourists starts from November and ... Open »
San Jose del Cabo
San Jose del Cabo is a city that is a total contrast to its neighbor Cabo San Lucas. Both cities are located quite close to each other, both have the access to the beautiful white beach that forms a 33 km long tourist corridor between the two settlements. San Jose del Cabo is a quiet little town in Mexico. Its mild climate and cozy territory attract tourists who want to ... Open »
Guadalajara
This is an economic center of west and north-west of Mexico. In Guadalajara are well-developed food, shoe, beer, chemical, and textile industries. Also here are created modern machine building and fertilizer creation factories. The city is a large transport junction as here cross important railway and auto routes. There are also a products pipe line and a gas pipeline here. ... Open »
Chihuahua
The town has a railway line, the journey on which will be a real pleasure. The highway is built through the picturesque countryside. Barranca del Cobre is particularly interesting to visitors. The name of this place is translated as "Copper Canyon". This is a whole series of majestic canyons that create a truly unforgettable sight. Each of the 20 canyons is approximately four ... Open »
Monterrey
It won’t be an exaggeration to say that Monterrey is the most progressive city in Mexico. Visitors will find numerous tourist complexes, hotels and inns in Monterrey. Due to the fact that the city is perfectly planned, the observation of local sights and memorable places is very convenient. The choice of modern shopping malls, restaurants and entertainment venues, cultural ... Open »
Queretaro
Do you enjoy visiting museums? In Queretaro, tourists can visit the Zacatecana House Museum. This is a true “home” of Mexican painting and applied arts. Nowadays, the exhibited collection offers visitors to make a journey back to the seventeenth century. The Zacatecana House Museum exhibits antique furniture, paintings, glassware, and ceramics of that period. Besides ... Open »

All about Mazatlan, Mexico - sightseeings, attractions, touristic spots, architecture, history, culture and cuisine. Prepare your trip together with OrangeSmile.com - find out the 'must see' things in Mazatlan, which places to visit, which excursions to take, where the breathtaking views are waiting for you. Planning your trip with this travel guide will help your to get the most out of Mazatlan in few days.