Sightseeing in Mexico City - what to see. Complete travel guide 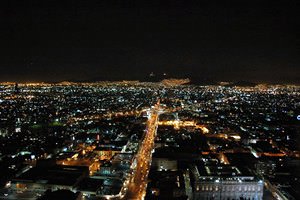 Mexico City is a capital that is full of contrasts. Tourists usually either immediately like it or reject it, and have a desire to leave the city as soon as possible in order to move to a quieter place. Magnificent buildings and museums are mixed here with slums full of poverty, old churches and green parks that seem to spread peace border with lively and too noisy streets. In short, the word "special" fits Mexico the best. This is a special, charming and very versatile city.
Cultural vacation in Mexico City - fantastic architecture and monuments
Metropolitan Cathedral, Basilica of Our Lady of Guadalupe, Palacio de Bellas Artes, La Luz del Mundo, Estadio Azteca, Museum of Modern Art, as well as many others, they all become the world's cultural heritage objects and remain as iconic monuments for Mexico City …

was built between 1780 and 1790 on the site of an Aztec fort. The castle provides beautiful panoramic views of the city. The gardens that surround the castle are designed by Empress Carlotta herself. Initially, the building was occupied by Military Academy, and then it served as an official royal residence. In 1939, by order of President Cardenas, the castle became the location of the National History Museum (Museo Nacional de Historia). Castillo de Chapultepec has been recently reopened after two years of a thorough restoration that included not only the structure of the building, but also its inner premises.
Museo Frida Kahlo.
Museo Frida Kahlo

is located in the former house of a mysterious and original artist Frida Kahlo. She lived in this house together with her husband Diego Rivera. The museum displays personal items of the artist - her jewelry, unfinished canvases on easels, and her wheelchair that stands in the studio where she painted. Besides Frida Kahlo paintings the museum exhibits works by Mexican artists Jose Maria Velasco and Jose Clemente Orozco. Copyright www.orangesmile.com
Family holidays with kids in Mexico City. How to entertain your child, things to show to children.
This lively and optimistic Mexican city is a perfect destination for travelers with children. There are many beautiful parks and interesting entertainment centers. Jardin Centenario Park is …

was built on the site, where a man named Juan Diego had a vision of the Virgin of Guadalupe in 1531. The local priest Friar Juan de Zumarraga was initially skeptical about the man’s claim and demanded a proof. The Blessed Virgin came to Diego for the second time, and her image miraculously imprinted on Diego’s cloak, and the firewood he had gathered turned into roses. After this magnificent vision a church was built on the site of the event on top of Tepeyac hill. The church is dedicated to the patroness of Mexico, Immaculate Guadalupe. During many centuries that little church attracted so many pilgrims that it was decided to replace the church by a basilica. The basilica was designed by Pedro Ramírez Vázquez, the architect who built the National Museum of Anthropology. The magic cloak is kept in the basilica, in a glass case behind the altar. 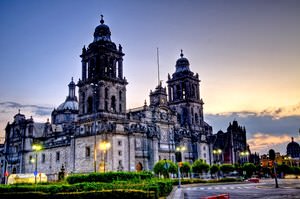 opened its doors in 1968. This is one of the best museums of its type. The entrance to the museum is decorated with a giant figure of the Aztec god of rain Tlaloc. The weight of the figure is nearly 200 tons. Archaeological finds occupy 11 halls of the museum. Here visitors will get an idea how ancient civilizations that existed in the territory of modern Mexico lived. The cafeteria of the museum deserves a special attention. It often hosts live music performances, during which musicians use replicas of prehistoric musical instruments.
Cuisine of Mexico City for gourmet with top restaurants and cafe
The local cuisine can be called one of the major national attractions. It is truly original and unique. Corn and corn flour occupy the honorable place in the national cuisine. These …

was started in 1904. The palace was built on the ruins of the Monastery of Santa Isabel. According to the plan, the grand opening of the palace was to be held on the day of the 100th anniversary of Mexico's independence from Spain. However, the project, led by the Italian architect Adamo Boari, faced serious difficulties due to instability of the soil on the site. Time passed, the revolution started, and the building of the palace was finished only in 1934. At that time, the project was headed by the architect Federico Mariscal. Therefore, there’s nothing surprising that the marble facade of the building, made as a combination of the neoclassical style and Art Nouveau, contrasts with interior that is made in the art deco style. Fans of art will be definitely not disappointed by murals made by Rivera, Siqueiros, Orozco, Tamayo and Montenegro. The glass curtain by Tiffany also deserves a special attention. The curtain is made of almost a million parts. Modern Mexican landscape painter Dr. Atl used them as a canvas and drew volcanoes of Mexico on the curtain. 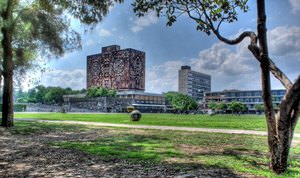 were built by the Aztecs for agricultural purposes. This technique helped the Aztecs to create one of the most developed cities, the capital of the country named Tenochtitlan. Xochimilco canals are one of the most popular tourist destinations. Coasts of the canals are dotted with houses and docks. This place is especially crowded on weekends. Many Mexican families and tourists enjoy hiring boats that come together with music and food.
Authentic traditions, festivals and lifestyle of Mexico City inhabitants
Local residents are talented and friendly people. These are great musicians, dancers and acrobats. Without a doubt, we can say that every native resident certainly has some talent. They are …

was built by Hernan Cortes, the conqueror of Mexico. The building that visitors can see today was built in 1693. In 1920 one more floor was added to the building. The National Palace is well-known primarily for its amazing collection of murals by Diego Rivera. The most famous fresco is a giant work "The epos about Mexican people and their struggle for freedom and independence" that exposes the two thousand year history of Mexico. The palace also hosts a small museum dedicated to Benito Juárez and the Mexican Congress. Entrance to the palace is free.

This guide to iconic landmarks and sights of Mexico City is protected by the copyright law. You can re-publish this content with mandatory attribution: direct and active hyperlink to www.orangesmile.com.
Mexico City - guide chapters 1 2 3 4 5 6 7 8 9 10 11 12 13 14 15 16

Sights around Mexico City from our guide 'Extreme places on Earth' 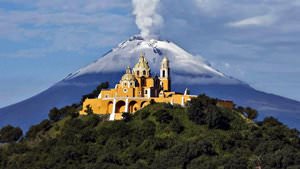 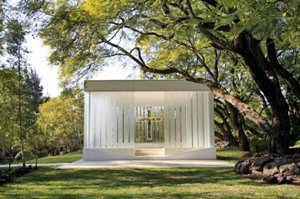 Distance from Mexico City center - 55.3 km.
From a distance the building looks cohesive and the gleams in its walls are not seen. In the evening the chapel is decorated with an effective illumination that makes the building bright inside. It is interesting that in the territory of the garden was planned to build a classical chapel in the colonial style. Architectures from Bunker Arquitectura studio admonished the sponsors of the project that the glass chapel will look better among nature. … Read further

Search touristic sites on the map of Mexico City

Sightseeing in regions nearby Mexico City

Cuernavaca
The importance of the city was increasing year after year, turning Cuernavaca into a rich Spanish settlement. However, it officially got the town status only in the 30s of the 19th century. During the war of the United States with Mexico, the Cadwalader Brigade captured the city. In 1854, the Ayutla Rebellion emerged in the region. After that conservator Santa Anna was driven ... Open »
Puebla
The favorable location helped the city to become an important economic and cultural center within a short time. The population of Puebla was growing, and the economy of the state was flourishing. The city was growing in size, and so many churches and monasteries appeared in it. The following centuries were the “golden age” for the Mexican city as its production sector was ... Open »
Queretaro
The first monks arrived in Queretaro in 1530. Initially, these were the Franciscans who tried to convert local people to Christianity. They built the first churches and monasteries in the region. Later, the Jesuits joined them. Santiago de Queretaro officially became a town only in 1606. Forty-nine years later, the population of Queretaro consisted exclusively of the Spanish. ... Open »
Acapulco
Travelers, who enjoy going to excursions, will also find much interesting in Acapulco. Here there are many museums and numerous historical and architectural sights. Municipal Square Zocalo is often called the historical heart of Acapulco. Here you will also find De la Soledad cathedral. In this historical part of the city you can also find Nuestra Señora de la Soledad, many ... Open »
Ixtapa
Tourists from all over the world come here to enjoy a pleasant vacation and sunbathe at sandy beaches that Ixtapa is famous for. Linda and La Ropa are the most popular recreation areas of the resort. These beach areas are perfect for vacationers with children because the ocean is usually calm in the area. Is scuba diving an essential part of any vacation for you? In this ... Open »
Tampico
Those, who like fun excursions, should definitely go to the town named El Tyne, where have retained many historical monuments. This town has become famous because of amazing pyramids, the construction of which took place in the 9 - 13th centuries. According to one version of archaeologists the first settlers of this place have determined time with their help. The most striking ... Open »

All about Mexico City, Mexico - sightseeings, attractions, touristic spots, architecture, history, culture and cuisine. Prepare your trip together with OrangeSmile.com - find out the 'must see' things in Mexico City, which places to visit, which excursions to take, where the breathtaking views are waiting for you. Planning your trip with this travel guide will help your to get the most out of Mexico City in few days.