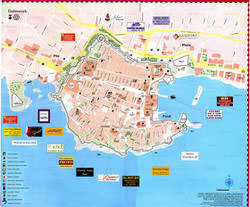 Interactive maps of hiking and biking routes around Dubrovnik

1. You can zoom in/out using your mouse wheel, as well as move the map of Dubrovnik with your mouse.
2. This interactive map presents two modes: 'Biking Routes' and 'Hiking Routes'. Use the '+' button on the map to switch between them.

This Dubrovnik map has two modes: 'Railway Network' and 'Landscape & Rural Map'. Use the '+' button on the map to navigate.

Zadar Airport is one of the oldest in Croatia. It receives flights from most European countries. Its carrying capacity is in the range of three hundred thousand a year. It is located less than 10 kilometers from the city of Zadar. To get to the city’s bus station, you can use the buses of various carriers. It is worth noting that only this airport has a business terminal. You can find on its territory, special lounges for those who want to relax before or after the flight. In addition, there is a Duty Free shop, bank branches, a medical center, cafes and restaurants, and parking. … Open

Croatia is a deeply religious country. Therefore, holidays associated with religion, enjoy a special attitude. The main holiday of the Catholic world of Croatia is Easter. Its date is not fixed and, every year, it changes. The next day after Easter, Monday, is a non-working day, which speaks of the special importance of the holiday for the Croats. Women bake cakes and serve festive tables; relatives give each other memorable gifts. There are solemn church processions and gastronomic fairs on the streets of many cities. Another spectacular religious holiday is the feast of the Divine body and blood. It’s taking place on the 54th day after Easter. On this day, churches also organize solemn processions with holy gifts through the streets of the city or around churches. On December 25, Croatia, like other Catholic countries, celebrates Christmas. This holiday is considered a family one. On the Christmas Eve, the whole family gathers at a big table. The main dish of the feast is baked carp. There must be different sweets on the festive Christmas table. Already in early December, there are fairs in the central areas of the cities. There, you can buy small souvenirs and gifts for the holiday. The fairs are colorful. They also feature theatrical performances and folk festivals. It is customary to discuss plans for the next year. After dinner, the Croats often go to the temples for Christmas services. The New Year celebration in Croatia is also accompanied by mass festivities. It is customary to gather in the central squares where the best view of the festive salute opens. … Open

Our guide to Dubrovnik

The luxurious Dubrovnik Palace is loved by travelers from different parts of the country for its modern design, refined artistic style of elegantly furnished suites, magnificent restaurants and bars. For example, the hotel’s sushi bar – Satu – was the first Japanese cuisine bar in Dubrovnik. The design of Satu is truly a spectacular one with its Zen sand garden, bonsai, olives and black bamboo that create … Open

Weekend in Dubrovnik in original style

When it’s time to purchase souvenirs, don’t hurry up to expensive shops on the central street of Dubrovnik. Instead, head to Marine Damour shop on Od Puca Street away from the crowded tourist spots. This shop will please you with a wide choice of goods and reasonable prices. The shop sells all kinds of popular souvenirs, including beautiful postcards and guides, magnets and figures, and many other … Open

Festivals and events in Dubrovnik

If you are the food lover and passionate tourist then you must book tickets to Dubrovnik in spring and fall, when held the most favorite festivals among gourmands. The first festival will be suitable for seafood fans, especially fans of oysters. Did you know that in Dubrovnik, it is possible to try fresh oysters at the end of March and beginning of April during the gastronomic festival "Festa od kamenica". Time of … Open

The luxurious Radisson Blu Resort & Spa, Dubrovnik Sun Gardens is an ideal place for a honeymoon. Located on the seaside, this hotel offers elegant rooms with romantic design and a great selection of extra services for couples. One of the best spa centers in Dubrovnik is open at this hotel. The 3,500 square meter spa offers exclusive cosmetic treatments, massage, and hydrotherapy. The adjusting territory of the hotel … Open

The fans of fishing, to enjoy some time in the sea with spinning, first must get the permission of the Management of Fishery (Uprava Ribarstva). The license valid for one fishing day costs here 60 kunas, for two two days - 150 kunas, for a week - 250 kunas, for a month - 500 kunas. Admirers of golf will spend time perfectly in the Dubrovnik Golf Park, which has 18-hole and 9-hole fields. The club is located on the … Open

7. In many restaurants and cafes tips are included in the overall score. If the fee is not included in the account, you can leave waiter an additional fee, rounding the total bill. You should not leave a tip on the table. Tips are also given to taxi drivers, maids and hotel guides. 8. Prices of urban taxis are quite acceptable. On weekdays rates may be increased only in the evening. Typically, … Open