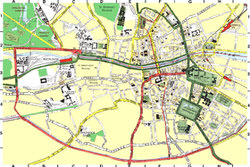 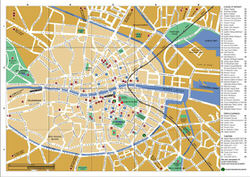 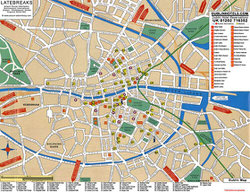 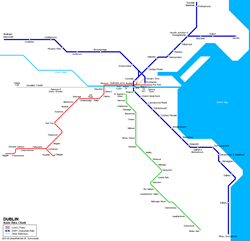 Interactive maps of hiking and biking routes around Dublin

1. You can zoom in/out using your mouse wheel, as well as move the map of Dublin with your mouse.
2. This interactive map presents two modes: 'Biking Routes' and 'Hiking Routes'. Use the '+' button on the map to switch between them.

This Dublin map has two modes: 'Railway Network' and 'Landscape & Rural Map'. Use the '+' button on the map to navigate.

Ireland West Airport Knock is also designed for international flights besides the many charter flights from the UK and France that the airport accepts daily. Since 2007, the airport began restoration work to which the government has allocated more than twenty-seven million euros. Thus, in 2008, the airport was assigned a second category. This means that during takeoff or landing, passengers are guaranteed absolute safety even in conditions of poor visibility. To date, the airport operates three terminals at once, and a wonderful viewing platform that will please tourists. Galway Airport is the air gateway of West Ireland. It is located just 8 kilometers from the city of Galway. It should be noted that student of light aviation school undergo their practical training at the airport. … Open

Overview of festivals and celebrations in Ireland

Irish are descendants of the Celts. Therefore, despite religiousness and adherence to Christianity, some pagan holidays have preserved. One of them is Beltane celebrated on May 1. This holiday symbolizes the beginning of summer. The Celts worshiped the fertility god on this day. The tradition of breeding large fires in the hills, planting a bush of rowan in the garden near the house and decorating it in the manner of the New Year tree has survived to this day. Another amazing neo-pagan festival is celebrated on the day of the autumn equinox. Mabon is associated with harvesting. It was originally dedicated to mother earth. Over time, the holiday became a symbol of everything, which no longer exists. On this day, it is customary to remember the deceased women. Families on the Mabon go out for walks in the forest or for picnics. They collect leaves, branches, which are later used to decorate the house. … Open

Our guide to Dublin

5. Budget travelers are recommended to purchase a discount card called Dublin Pass, which can be got in all tourist offices. It entitles its owner the right to a reduced fare in public transport, as well as discounts for some exhibitions, in many shops and restaurants. The pass can be valid for a period from one to six days, and it costs from 29 to 89 euros. 6. Smoking in public places is … Open

Many popular films were shot in Dublin, so film fans will find it particularly interesting to visit it. For example, several scenes of Harry Potter were shot in Trinity College, its library to be precise. Besides that, such famous people as Oscar Wilde and Jonathan Swift studied there. Dublin Castle became a shooting spot of one of the best historical TV series of our time – The Tudors. When taking a stroll on … Open

Festivals and events in Dublin

Dublin also hosts one more festival to honor a talented writer, whose work has become legendary. This is Bram Stoker, the author of Dracula. The event takes place at the end of October and lasts three days. The date is not random as it falls to Samhain, an old holiday that is, in some way, a predecessor of Halloween. At this time, the motherland of Jonathan Swift becomes the most gothic city in the region, which is … Open

Those with a sweet tooth should definitely visit Butlers Chocolate Café. This wonderful cafe offers not only brand chocolate confectionery but excellent sweet gifts for you and your loved ones. They sell dozens of varieties of sweets, pastilles, creams made of white chocolate and cakes. Tourists with children will surely appreciate Chapters Bookstore. It is very large. One of its sections is entirely devoted to … Open

Dublin for children - what to visit

A suitable entertainment center – Funky Monkeys Clarehall, is also available for the youngest travelers. This entertainment center is indoors; hence one can relax and have fun in it at any time of the year and in any weather. For children, there are many different playgrounds, including much loved slides and dry pools with balls, various game houses and labyrinths. There are a lot of interesting toys in the … Open

Fans of theatrical art in Dublin, should visit the Abbey Theater. Its opening took place in 1904. However in 1951, the historical building of the theater was almost completely destroyed during a fire. Only 15 years later, was a new building constructed for the theater. Presently, the popular theater is largely focused on fans of contemporary art. An intriguing sightseeing facility is the Kilmanchem Gaol. It was … Open