Religions and languages in Austria 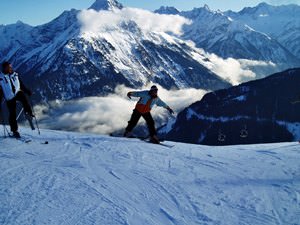 For a long time, Austria belonged to the Catholic states. The influence of Rome was very significant, therefore practically the whole population of the country was professing Christianity. With the arrival of Martin Luther, many people changed their views and the overwhelming majority of Austrian citizens became Protestants. Catholic superiority returned only after the end of World War II. To the date, the overwhelming majority of Catholics live in Austria. In spite of the fact that the church conducts quite active educational activity, religion in no way influences the state administration. Therefore, Austria is considered a secular state.
Shopping in Austria - best shopping places, what to buy?
Austria offers a variety of options for a nice rest. As in any European country, there are many boutiques of famous world brands and ordinary stores …
Read further
Despite various religious tensions in the past, today, all confessions in Austria coexist peacefully and calmly. Representatives of various religions feel comfortable here. Freedom of religion is protected at the state and legislative level. Three quarters of the total population of the country are Catholics; the most of the rest are Protestants. There are small groups of Muslims and Orthodox. About 10% of residents consider themselves atheists. Religious minorities are represented by Buddhists, Jews, Hindus, and Sikhs. The largest number of evangelists in Austria live in Salzburg.
The official state language of the Austrian federation is German. Literary German is called Hochdeutsch. All educational institutions teach only in German, and all the legislative and official documents are signed and compiled on it. In everyday life, citizens speak modified Austrian, which is a kind of Austro-Bavarian dialect. In the provinces of Carinthia and Styria, the official language is Slovenian, and Burgenland speaks Hungarian and Croatian. It is worth noting that the original German dialect of the Austrian in many respects differs from that of the Germans, although there is no language barrier between the two states. Copyright www.orangesmile.com 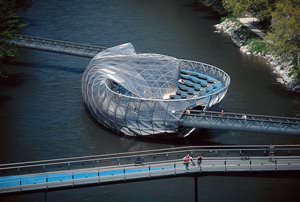 The unique sight of the world is located in the Austrian city of Graz. Here the only bridge restaurant extends across the Mur River 'Aiola Island' across the Mur River. The restaurant has long been a favorite place for the city dwellers and is considered an attractive attraction for the tourists. In the middle of this modern pedestrian bridge, which connects two banks of the river, is the beautiful glazed pavilion.

It is a location of the popular restaurant, as well as the excellent viewing platforms and even the special beach areas, where you can sunbathe in the warm weather, for the visitors on the bridge. The strange bridge at the river Mur was opened in 2003. The author of her design was the architect from New York Vito Acconci.

Apart from the great functional importance, the … Read all
All unique sightseeing Austria

Photogallery of iconic places of Austria

Vienna
The indifferent attitude of locals to coffee has also become a notable feature of Vienna. You will surely see numerous coffee shops during your walk on the streets of Vienna. They have long become the most favorite place of rest for the local people. On evenings and during the lunchtime the locals gather on terraces of cozy cafes and enjoy the flavorful drink. Some coffee shops have nothing similar with the establishments that can be seen in other cities. These are unique "oases of comfort" … Read more

Salzburg
St. Rupert's Fair is an interesting celebration. During the festival you can also see numerous local residents and tourists wearing beautiful old costumes. Each citizen in the city certainly has a special holiday outfit. Women here wear beautiful dresses and hats that were fashionable several centuries ago, and men sew tail coats and put on cylinders. Those people, who have not had time to get such festive apparel, are welcome to visit special workshops, where they can easily order most unique … Read more

Solden
You will be surprised when you realize how many citizens ski in any free time. It's kind of a national sport here. Children are sent for training from 4-5 years. Young skiers participate in competitions at the age of 7. Local residents generally love to play sports and take care of their own health. You will rarely see fat people on the streets of Solden. However, the daily schedule is not conducive to overeating. A self-respecting citizen spends almost all of his time at work. The people … Read more

Mayrhofen
Rise&Fall gathers more and more participants from year to year. This is quite understandable because the event is very spectacular. In addition, in general, the complexity of the tracks allows participating in them not only professional athletes but also amateurs. However, even if you do not want to participate in the competition, you should still visit at least the beginning of Rise&Fall for a rather entertaining opening ceremony. Several interesting local freestyle and downhill events take … Read more

Kitzbuhel
A few days after the end of the festival haute cuisine another large-scale festival, which will be interesting to all jazz fans, starts. Usually Jazz Festival takes place in the last week of March; not less than twenty concerts are held within festival. Among the participants of the festival, there are young music bands and popular artists that have fans all over the world. The scenes where concerts are held are built in the town square; some performances are held in specially prepared rooms. … Read more

Badgastein
Several dozen beautiful hotels were located on the territory of the town by the middle of the last century. They were very diverse from very modest and small houses to luxury residences designed for rich guests. Unfortunately, the resort's popularity began to decline in the 60s. Many of the hotels were abandoned or completely demolished. Bad Gastein is once again famous today but more as a ski resort. However, anyone can visit the thermal tunnels. Their total length is two kilometers. They are … Read more

Graz
In order to thank the nature for rich harvest, it was decided to organize various colorful performances. These days this amazing medieval feast is celebrated in a larger scale. The main city park has become the main platform on which most of performances are held. The territory of the park becomes the location of several scenes that attract connoisseurs of contemporary literature, classical music and theater arts. The park is full of people simply every day. The Festival of Body Art is one of … Read more

Austria: traditions in the regions