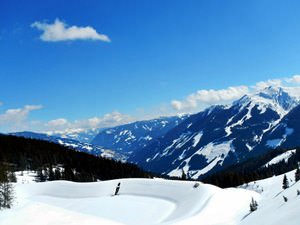 Austria has long been located at the intersection of routes to various European countries. This has led to the fact that the hotel industry is well developed here. For many decades, there have being the well-known hotels that caused a huge interest of various tourists. Many associate Austria primarily with the Alps, so the most fashionable hotels are located just at the mountain resorts - Ischgl, Zell Am See, and Solden. Many similar hotels are not just for money making, but a family business that is passed on from generation to generation. That is why many facilities eventually become famous far beyond this country. There are also many places that can be definitely called famous and even cult. They are, as a rule, in major cities - Vienna, Innsbruck, and Salzburg. The tempted tourist has options to choose. These may be five-star hotel complexes or cozy designer hotels, where each room is designed in its way. On the territory of Austria, there are often small castles that were turned into hotels. There are not that many opportunities to spend time in a medieval castle and feel like a real aristocrat. will also not disappoint its visitors. This is one of the best hotels for family holidays in the city. Comfortable guestrooms made in cream shades are one of the reasons why so many travelers choose to stay there. When the weather permits, travelers are welcome to relax in the adjusting picturesque garden. The hotel also has a large outdoor swimming pool and spacious terraces with garden furniture. During the tourist season, the hotel hosts various entertaining programs with dancing and music performances for guests.
Check the hotel prices and availability
Hotel Sacher Salzburg, Salzburg Hotel Sacher Salzburg

, the opening of which took place in 1866, is a priceless historic landmark. Right after the opening, the hotel was operating under another name, Osterreichischer Hof, but since 1988 the hotel has been owned and managed by the Gürtler family. The design of the hotel was developed by the owner herself – Elizabeth Gürtler. Upon entering, guests will be amazed at numerous artworks and elegant designer decorations. The legendary old Sacher Salzburg café is open in the same building with the hotel. Thousands of sweet tooths around the world dream of visiting this famous café. It is believed that this café serves the authentic Austrian Sacher cake cooked in full accordance with the classic recipe.
Check the hotel prices and availability
Copyright www.orangesmile.com is full of interesting stories and legends. The gorgeous hotel is open in a beautiful palace that dates back to the 18th century. Hotel Ambassador greeted its first guests in 1898. Before transformation into a hotel, the beautiful palace regularly hosted balls, important meetings, and other notable events. It was the place of the first concert of young Mozart. Such famous composers as Beethoven and Haydn performed there.
Check the hotel prices and availability Dollinger, Innsbruck Travelers, who want to feel home-like in a new place, will enjoy their stay at the comfortable Dollinger

. For more than 500 years, the hotel has been owned and run by the same family. Probably, this is the reason why Dollinger still has details of the original design and an inimitable historical atmosphere. In guestrooms, old mirrors and furniture are skillfully missed with modern designer accessories and textiles of trendy shades. Some guestrooms still feature the original stone décor. One of the best Tyrolean cuisine restaurants in Innsbruck is also located in Dollinger. In summer, the tables are also installed in the garden.
Check the hotel prices and availability also has an interesting history. Starting from 1923 and till 1938, the charming villa belonged to the Trapp family, the history of which is well-known to fans of The Sound of Music film. In 1947, the villa was abandoned and closed for visitors. Villa Trapp continued its miserable existence till 2008, when a hotel was opened in the old house. The design of the historic villa was made as close to the original as possible, so travelers are still able to admire priceless antique treasures and artworks. Villa Trapp offers 12 comfortable rooms for its guests and a gorgeous private garden that protects the villa from the noise of streets and traffic.
Check the hotel prices and availability is a unique and beautiful hotel that is located just a couple of minutes away from the Golden Roof and other famous landmarks of the city. This hotel is liked not only by fans of excursions but also by foodies and generally everyone who likes to eat. One of the oldest restaurants in Innsbruck that was opened more than 600 years ago works in the building of Weisses Rössl. This is the only place where visitors can try the real homemade pasta with forest mushrooms, pork ribs cooked in accordance with an old recipe, and amazing desserts, the recipes of which are kept in secret by chefs of the restaurant. The hotel is distinguished by an original design with rooms made in minimalist style and decorated with large modern style panels.
Check the hotel prices and availability is one of them. The hotel, which is open in a beautiful Baroque style building, is the best place for travelers who value comfort. Large beds with elegant bed clothing are one of the eye-catching details in guestrooms. Flowers in pots create a home-like atmosphere while elegant retro style furniture reminds of the culture of the past.
Check the hotel prices and availability is open on top of Monchsberg Mount. The ancient castle-hotel is surrounded by a large park zone. It’s the oldest luxury hotel in Salzburg. During its long and respectable history, Hotel Schloss Mönchstein has won many prestigious titles and awards. Schloss Mönchstein is also the name of the famous Austrian cuisine restaurant awarded with two toques by Gault et Millau. The magnificent wine cellar is one of the advantages of the hotel.
Check the hotel prices and availability is located on the bank of the Inn River. This magnificent hotel is a worthy competitor of the most famous hotel in the city. The hotel attracts guests by the luxurious décor of guestrooms where many furniture pieces and accessories are hand-made. The royal bathroom with décor made of rare sorts of marble and Swarovski crystals is worth a separate mention. The historical building, in which the hotel is open now, has an old cellar that was transformed into a wonderful bar. Guests are encouraged to start the day with a delicious buffet type breakfast.
Check the hotel prices and availability is the most famous and high-class hotel in Innsbruck. For many years, this hotel has been chosen by various celebrities, politicians, and other prominent personalities. Prince of Monaco, Queen Elizabeth II, the Rolling Stones, and Sting were among the guests of this hotel. The most prestigious hotel in Innsbruck features elegant décor in an Alpine style that looks particularly charming thanks to elements made of light wood and premium textiles. Don’t forget to attend Europa bar and the stylish salon that has been working since 1883.
Check the hotel prices and availability
Schloss Fuschl, Salzburg The legendary Schloss Fuschl

is present in the list of the outstanding historic landmarks of Salzburg. Located in the suburbs of the city, on the shore of Fuschlsee Lake, the hotel is open in a gorgeous old castle with rich and interesting history. In the 15th century, the castle was built for the Bishop of Salzburg. For many years, it was an official hunting residence of the prominent religious leader. During its long history, the magnificent castle changed many owners. During the World War II period, Schloss Fuschl belonged to Joachim von Ribbentrop, the Germany’s minister of international affairs, for several years. Therefore, many meetings of the Third Reich took place in this castle, and Adolf Hitler himself visited it several times.

Photogallery of architecture of Austria

Vienna
Quite an interesting fact – not only Frau Sacher lived in the hotel but also her favorite pets – small dogs. According to historical data, the owner had more than a hundred dogs. Frau Sacher received many famous people in the palace – Prince of Monaco with his wife, Queen Elizabeth II, Indira Gandhi, John Kennedy, and many more. Nowadays, everyone is welcome to live in one of the legendary guest rooms of Sacher Hotel and enjoy the tremendous historical atmosphere of this place. The … Read more

Salzburg
Fans of films made in the middle of the 20th century know Schloss Fuschl because of one more important event – famous Sissi movie with Romy Schneider as the lead actress was filmed in the castle. Nowadays, everyone is welcome to spend several days in the legendary castle, and travelers have a fantastic opportunity to see numerous artifacts exhibited there. For many years, Schloss Fuschl has kept a rich collection of art and a collection of personal items of the Austrian empress. One more … Read more

Innsbruck
BEST WESTERN Hotel Mondschein is located on the bank of the Inn River. This magnificent hotel is a worthy competitor of the most famous hotel in the city. The hotel attracts guests by the luxurious décor of guestrooms where many furniture pieces and accessories are hand-made. The royal bathroom with décor made of rare sorts of marble and Swarovski crystals is worth a separate mention. The historical building, in which the hotel is open now, has an old cellar that was transformed into a … Read more

Map of legendary hotels in Austria