«« BEGINNING - PART I
Video of flights over top monuments of Brugge in HD format.
Use 'Full Screen' mode.
Any review of the architecture of Brugge would be incomplete without mentioning Church of Our Lady, Sint-Jakobskerk, English Convent Bruges, Groeninge Museum, Sint-Walburgakerk and many others. The virtual flight over these monuments in HD (the video is on the left), the photo galleries of Brugge, and the most interesting facts about every sight – we have carefully prepared lots of useful information for you. The overview architecture map of Brugge at the bottom of the page will help you not to get lost in your sightseeing routes of Brugge. So, let’s go!

Church of Our Lady, Brugge 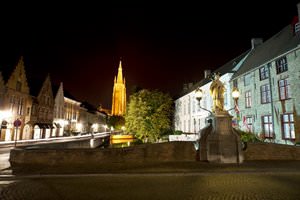 Facts:
» The Church of Our Lady is a construction that features the combination of Gothic and Roman styles.
»  The construction lasted over 2 years and was completed in the 13th century.
»  In the spacious church with a 122-meter tower, the only sculpture of Michelangelo, “The Virgin Mary with the Baby”, is kept.
»  Some windows of the church have the shape of a Reuleaux triangle. Such windows are quite rare.
»  The church is famous for the fact that the wife of Maximilian I Mary of Burgundy who lived a short life was buried here. The emperor loved his wife very much and called her the most beautiful woman in the world. 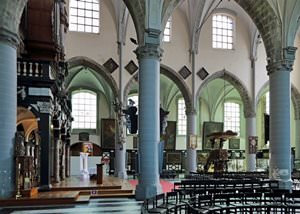 Facts:
» St. James’ Church was founded in the 12th century.
»  For many years, the building has been rebuilt and extended. During the reconstruction, a 6-meter cache was built in the tower.
»  In the 15th century, when the Burgundian dukes ruled, rich citizens brought gifts and made donations here. City guilds of craftsmen and merchants had a great income, so they constructed an altar in the church. During celebrations, they ordered services near their altar. So, there were 18 altars in St. James’ Church.
»  In the middle of the 16th century, in the times of the aniconic movement, a lot of precious items, paintings, and icons were broken and stolen.
»  However, many valuable items and pieces of art have been preserved to nowadays. So, it is not a coincidence that this church is called “the temple of treasures”. There is a preserved organ made in 1869. Many tourists come here to listen to organ music.

Facts: » The English Convent in Bruges is located 1.5 km from the Big Square.
»  The religious building started to be built in 1629. The idea to establish a church belonged to monks.
»  The construction of the sanctuary was completed in 1650.
»  During the Revolution, many monks sought refuge in England but they decided to return to Bruges in 1802. The congregation was named English Convent in honor of the country that hosted churchmen.
»  The famous attraction was restored in the 18th century. When it was reconstructed, some rooms were extended and the facade was changed.
»  After the reconstruction, a cross-domed church was built in the territory of the English Convent. The dome of the new construction is decorated with four oval windows.
»  The interior of the remarkable religious building features luxury and opulence. The altar was made of 20 types of marble.
»  In 1802, the church was closed to visitors. Even today, only churchmen can enter the monastery. However, visitors have an opportunity to visit a baroque temple.
»  The main purpose of the English Convent is to educate immigrants.

Facts: » The Groeningemuseum is the most important art museum in the city. It houses paintings of artists who lived and worked in Bruges from the 13th century.
»  The museum was founded by independent artists who also established the Free Brothership of Drawing and Painting in 1716. The Academy was occupied separate unsuitable rooms.
»  During the French Occupation, many monasteries and churches were looted. In 1794, such masterpieces, as "The Madonna with the Baby” by Michelangelo, “The Virgin and Child with Canon van der Paele” by Jan van Eyck (1436), and “The Judgment of Cambyses” by Gerard David, were transferred to Paris. They got back to Bruges in 1816. The citizens met these masterpieces with ringing bells in all churches.
»  Only in 1930, on the occasion of the hundredth anniversary of Belgium independence, a special building was built. It had all the necessary conditions: for holding pieces of art: lighting, humidity, and temperature. All exhibits are displayed in showrooms. There are no warehouses or storage rooms in the museum.
»  The main masterpieces, for example, works of Flemish masters, are kept in 15 museum halls. The museum collection is constantly updated. New paintings are often bought.
»  In separate rooms, you can visit the permanent exhibition of paintings by English artist Frank Brangwyn who was born in Bruges.

Facts: » St. Walburga's Church is a baroque construction located in Sint-Maartensplein, in Bruges.
»  Originally, the world-famous sanctuary served as a Jesuit church. The church was dedicated to one of the first Jesuit saints Francis Xavier. It had worked until the Jesuit Order was dissolved in 1773. Then, the church had been closed for some time. In 1778, it was re-opened as St. Walburga’s Parish Church. It is dedicated to Saint Walburga even now.
»  When the church was closed and restored for the first time, it had managed to serve as a parish church for several years. In 1794, it was closed again, like other churches of French revolutionaries who came to Bruges in 1794. When the Concordat was dissolved in 1802, services started to be held here again. The church replaced St. Donatian's Cathedral that was destroyed during riots.
»  Fortunately, St. Walburga's Church was not sold or demolished. The status of national heritage has helped it survive to the present day in its original form.

Facts: » The Bruges City Hall is one of the oldest medieval buildings. It was built in 1376 at the site of an old jail. When the first building where the City Council sat was destroyed by fire in 1280, officials had to meet in jail.
»  The construction of a new building was completed in 1421. It was a magnificent construction with a facade decorated with wonderful moldings and ended with a notched parapet with towers. The City Hall also had a luxurious interior.
»  In 1887, the fire destroyed the inner rooms of the building. The restoration began only in 1895 and lasted 10 years.
»  The Small and Big Halls were united. Now, this Hall is named Gothic. Here, the City Council sits and wedding ceremonies are held.
»  Flandrian counts and countess’ stone statues (copies) that were possibly made by sculptor Jan van Eyck in the Middle Ages were restored. Some rooms of the building are allocated for the Bruges Museum. The City Hall is a UNESCO World Heritage site in Belgium.

Plan your own tour over Brugge on the monuments map

Search for architecture monuments of Brugge on the map

Tours through neighbours of Brugge

Gent
There was a cloister at the site of the present House of God in the first half of the 10th century. You can see its wooden remains in the cave. Sint Baafskathedraal has not changed since the 14th century. The construction was completed in 1569. It seems that the building is cone, which is the feature of the Gothic style. The 3.5-meter altar is considered as a relic. It was created in the Middle Ages. When its shutters are opened, ... Open »
Brussels
The Brussels Town Hall is one of the most beautiful buildings in the city, which is the symbol of Brussels. The 5-meter statue of the Archangel Michael, the patron saint of Brussels, throwing devil is installed at the 96-meter Gothic Tower. The oldest part of the town hall was built in 1420, and the other part of the building was completed a little later (in 1450). Facade of the Hall is decorated with numerous statues of nobles, saints, and ... Open »
Rotterdam
The Euromast is a skyscraper in the form of the mast. The City Hall declared the competition of the construction of the extraordinary object. The Dutch architect won it. The Euromast was built in 1960 in conjunction with the tenth international Floriade exhibition. The Euromast is 9 m. The walls are about 30 cm thick. Its foundation is a solid block that weighs 1 900 tons. It makes such a thin construction more stable. There are ... Open »
The Hague
The quadrangle building is built of granite, light quarry sandstone, and red brick. There is a courtyard with a fountain bowl created in Copenhagen. There is also a garden designed like English landscapes. In the Peace Palace, legal proceedings and arbitration court hearings take place. This place is an indisputable institution of justice incorruptibility. Many countries contributed to the construction. When the First ... Open »
Amsterdam
The Royal Palace is one of the three palaces in the Netherlands at the disposal of the monarch. The palace has been built to serve as a town hall in the Golden Age. Later, the building became the royal palace of King Louis Napoleon, and later it was converted into the Dutch royal palace. At present, the venue is used by the monarch for entertaining and formal events. New Year's court is annually held there. Numerous halls and galleries of the ... Open »
OrangeSmile.com - online travel reservation expert providing reliable car rental and hotel booking services. We feature more than 25.000 destinations with 12.000 rental offices and 200.000 hotels worldwide.
Secure Server