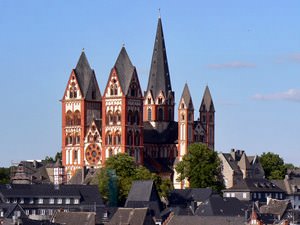 Every city of Limburg is a living history embodied in incomparable historical monuments. Those who like to devote their rest to interesting museums and art galleries won’t be bored, as there are cultural venues even in the smallest towns of the province. Much of the important tour facilities are located in the capital of Limburg, Maastricht, and in its immediate surroundings.
Cuisine of Limburg for gourmet with top restaurants and cafe
Limburg is full of attractive dining places, where you can enjoy classic Dutch cuisine. It should be noted that neighboring Belgium had a serious impact on the formation of Limburg culinary …

Open
One of the most picturesque architectural buildings of the capital is the Basilica of St. Servatius; it is situated in the heart of the city. The interior decoration of the Basilica is as fascinating as its spectacular exterior; spacious rooms are decorated with colorful murals and elegant gold trim. A part of the basilica houses a unique collection of religious artifacts and everyone can admire them. The region features picturesque grottoes attracting attention of curious travelers. One of the most beautiful and interesting places to visit, St. Pietersberg Caves, is in the capital. An entrance to the cave is found in an ancient tower that once was a part of large-scale fortifications.
Those who wish to admire unique medieval monuments should definitely see Kasteel Hoensbroek. It resembles a luxurious palace surrounded by the vast garden. Near the castle there is a special seating area, where many tourists set for a picnic. There are numerous interesting excursion sites outside of the capital. Copyright www.orangesmile.com
Your active city break in Limburg. Attractions, recreation and entertainment - best places to spend your day and night here
The fabulously beautiful region of Limburg appeals to fans of various activities. Scenic parks and caves, ultramodern malls and shopping centers, an abundance of attractive bars and …

Open
Important attractions of Valkenburg are Castle Ruins & Velvet Cave. Dungeons are decorated with original sculptures and murals, which make walking around even more exciting. Those who are fond of theater would find it interesting to visit the city of Heerlen. This is where one of the most famous and popular theaters, Parkstad Limburg Theater, is situated. Venlo also features one of the most visited cultural venues of the region, Limburgs Museum. Its collection is dedicated to outstanding historical events, as well as the culture and traditions of the indigenous population.

In the section below, you can get one of our excursion, activities or city discovery tours over Limburg and surroundings. Our website offers 10-30% lower ticket prices, when compared to the offline purchase on the spot.

This guide to cultural sights Limburg is protected by the copyright law. You can re-publish this content with mandatory attribution: direct and active hyperlink to www.orangesmile.com.
Limburg - guide chapters 1 2 3 4
Reference information
Map of all palaces

Public palaces near Limburg
♥   Palace 'Bronbeek' , 61.9 km from the center. On the map

Cathedrals and basilicas near Limburg
♥   Basilika St. Viktor („St. Viktor-Dom”), Xanten, 36.5 km from the center. On the map

♥   Münster-Basilika St. Vitus, Mönchengladbach, 37.9 km from the center. On the map

♥   Basiliek van het Heilig Sacrament, Meerssen, 65.7 km from the center. On the map

Unique spots in Limburg and near

Distance from Limburg center - 37.9 km.
Temporary exhibitions are often held in the museum. They are dedicated to a variety of areas of contemporary art. The museum has changed its location several times over the years as its collection has constantly expanded. The current building is a striking example of postmodernism. The Museum Abteiberg moved here more than a decade ago. Johannes Cladders is the founder of the museum. He became its first director afterward. … Read further

Distance from Limburg center - 47.5 km.
Not always a ladder has an exact practical purpose. An excellent example is an original attraction, which can be seen in Duisburg. "Tiger and Turtle" staircase resembles a roller coaster with its outlines, but visitors of the attraction are offered not to pass, but to take a difficult route. An unusual installation can also be seen as a symbolic monument. The main material used for its construction is zinc, and it has been decided to build an attraction in the place where zinc mining was previously conducted. … Read further

Photogallery of cultural heritage of Limburg

Excursions over cultural sights of neighbours of Limburg

Venlo
Venlo is an incredibly attractive and cozy city that charms travelers right from the start with its inimitable atmosphere of peace and hospitality. Small colorful buildings, tidy and well-maintained yards, and squares surrounded by architectural landmarks – it is hard to find a better place for fans of exciting excursions. Venlo is relatively young as it was granted the ... Open »
Monchengladbach
The guests of the city have an opportunity to take an interesting tour here. The starting point of most tours is the main city square Marktplatz Reid. For hundreds of years, the most significant events have taken place here. Today, the traditional fair is held in the square twice a week. Such fairs will interest those who want to taste the best regional specialties or buy ... Open »
Eindhoven
Fans of modern art certainly have to visit the Van Abbemuseum cultural complex situated in the incredibly beautiful skyscraper. In addition to an extensive collection of paintings, the center has a rich collection of photographs. Van Abbemuseum has become a regular venue for activities dedicated to contemporary art and culture. The Kempenland museum's collection is devoted ... Open »
Duisburg
Beautiful and ancient city of Duisburg traditionally attracts tourists by its places of interest and various cultural sites. Despite the fact that the city was severely damaged during the Second World War, a number of interesting architectural and historical monuments have survived in its territory. The majority of sightseeing tours start from a visit to Dreigiebelhaus – one ... Open »
Oberhausen
Fans of unusual tours and attractions should go explore the vicinity of the city where Halde Haniel is located. This stockpile was formed naturally through the course of industrial development of local deposits. It is notable for its scale and height of 159 meters. Now it is located in a vast landscape park where fascinating tours are held every day. Several years ago, a kind ... Open »
Dusseldorf
In order to see all the sights of Dusseldorf, travellers will need many days full of sightseeing. Visitors should not forget to visit St. Lawrence Basilica, which is one of the most interesting cult places of the city. The beautiful church was built in the 14th century and is considered one of the oldest buildings in the city. The basilica, as well as other famous sites of the ... Open »

Culture guide to Limburg. Which fascinating sights to visit once you are in Limburg: temples, churches, museums, theaters and castles. Recommendations (with addresses, phone numbers and links) on the places 'must visit' in Limburg. Plan your own city excursion by using this page info!