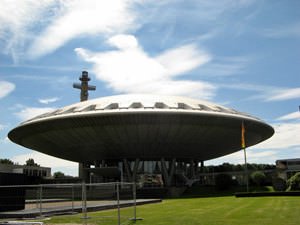 The picturesque southern city of Eindhoven features harmonious combination of unique historical atmosphere and modern style. Age of the city is more than seven hundred years; there are lots of interesting cultural sites in it. It should be noted that masterpieces of modern architecture deserve the attention of tourists; one of the most recognizable and popular attractions is the building of Philips.
Cuisine of Eindhoven for gourmet with top restaurants and cafe
Tourists could find the most unusual dining places, including attractive restaurants of local cuisine in Eindhoven. In the heart of the city there is the exotic Popocatepetl restaurant …

Open
Today the old building of company houses the museum. It tells visitors about production of light bulbs dating back to the 19th century. The museum has an interesting collection of old equipment; many of its exhibits continue to function properly, despite their impressive age.
Among architectural treasures, the church of St. Catherine is notable. Built in the mid19th century, it is located on the ruins of a medieval church. The construction is made in the Gothic Revival style and has a very impressive interior decoration; the church features amazing stained glass windows. Copyright www.orangesmile.com
Authentic traditions, festivals and lifestyle of Eindhoven inhabitants
Eindhoven is informally called the City of Light; this name is due to the important historical event which has radically changed the fate of the place. In 1891, Anton and Gerard Philips have …

Open
Among modern architectural landmarks the Evoluon conference center deserves attention. This unusual structure made in the futuristic style was erected in 1966. Opening of the conference center was dedicated to the 75th anniversary of Philips; thanks to the clever lighting system this building looks simply inimitable. 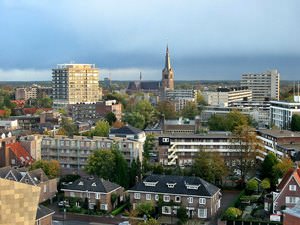 Fans of modern art certainly have to visit the Van Abbemuseum cultural complex situated in the incredibly beautiful skyscraper. In addition to an extensive collection of paintings, the center has a rich collection of photographs. Van Abbemuseum has become a regular venue for activities dedicated to contemporary art and culture.
Your active city break in Eindhoven. Attractions, recreation and entertainment - best places to spend your day and night here
Eindhoven is famous for an abundance of beautiful parks; those who prefer to devote time to hiking and cycling would enjoy the city. Families with children have to visit the local Best Zoo; …

Open
The Kempenland museum's collection is devoted to the history of the city; among its exhibits there are replicas of castles and fortifications that have been located in the vicinity of Eindhoven several hundred years ago. Much of the historical buildings were destroyed during the Second World War, but several amazing buildings have still preserved there. A walk around the city will give a lot of impressions, as fabulously beautiful parks and interesting sights are found there at every turn.

In the section below, you can get one of our excursion, activities or city discovery tours over Eindhoven and surroundings. Our website offers 10-30% lower ticket prices, when compared to the offline purchase on the spot.

This guide to cultural sights Eindhoven is protected by the copyright law. You can re-publish this content with mandatory attribution: direct and active hyperlink to www.orangesmile.com.
Eindhoven - guide chapters 1 2 3 4 5 6

What to visit during two-day excursion in Eindhoven

Public palaces near Eindhoven
♥   Palace 'Bronbeek' , 69.2 km from the center. On the map

Cathedrals and basilicas near Eindhoven
♥   Basiliek van de Sint-Jan-de-Doper, Oosterhout, 47.2 km from the center. On the map

Unique spots in Eindhoven and near

Distance from Eindhoven center - 64 km.
Every year at the end of April the Dutch celebrate the "most orange" festival on the planet - Queen's Day. The date of the event varies from year to year and falls on the 29th and 30th of April. The symbolic significance and grand scales are the main features of the huge party. The festivities are dedicated to Juliana, the ex-Queen of the Netherlands. It is also the day of national unity. This beautiful holiday, which has long received the status of important international event, is very symbolic and traditional. … Read further

Photogallery of cultural heritage of Eindhoven

Excursions over cultural sights of neighbours of Eindhoven

Den Bosch
The temple's interior is striking in its splendor. Skillful stained glass windows, vaulted ceilings with unusual ornaments, as well as a lot of interesting religious artifacts, which are hundreds of years old, have been preserved here. The cathedral is surrounded by several historic buildings, forming a very impressive architectural complex. Most of the local sightseeing ... Open »
Waalwijk
Another castle that can be found in the vicinity of Waalwijk is called Slot Loevestein. This place is famous for its gloomy atmosphere, and at the same time, it is one of the favorite places of couples in love. It also stands out with its high historical value. The castle was built in the 14th century for protection, and since that time it has witnessed many historical events ... Open »
Limburg
Important attractions of Valkenburg are Castle Ruins & Velvet Cave. Dungeons are decorated with original sculptures and murals, which make walking around even more exciting. Those who are fond of theater would find it interesting to visit the city of Heerlen. This is where one of the most famous and popular theaters, Parkstad Limburg Theater, is situated. Venlo also features ... Open »
Venlo
Museum van Bommel van Dam is one more interesting excursion destination for all travelers. It is a fantastic place to see works of modern painters and sculptors. The museum regularly hosts interesting exhibitions, presentations, and other cultural events. Limburgs Museum is the right place for everyone who wants to get acquainted with the history of the city and find out more ... Open »
Breda
When it comes to cultural venues of the city, it is important to mention the local History and Economy Museum that is open in a historic building that was used as barracks in the past. Bierreclamemuseum is one more unusual and very interesting venue. During an excursion there, visitors will learn many interesting facts about the popular drink and its production. Naturally, ... Open »
Arnhem
Tourists should not forget to see the town hall building. Local people call this building in quite an unusual way – Duivelshuis or the Home of the Devil. The beautiful mansion was constructed in the middle of the 16th century. At that time, it belonged to the family of a noble general. Only in the 19th century, the building became the city’s town hall. Korenmarkt or the ... Open »

Culture guide to Eindhoven. Which fascinating sights to visit once you are in Eindhoven: temples, churches, museums, theaters and castles. Recommendations (with addresses, phone numbers and links) on the places 'must visit' in Eindhoven. Plan your own city excursion by using this page info!