«« BEGINNING - PART I
Video of flights over top monuments of Rio de Janeiro in HD format.
Use 'Full Screen' mode.
We continue on the collection of the most important architecture monuments of Rio de Janeiro: Christ the Redeemer, Teatro Municipal, Candelaria Church, and Old Cathedral. Perhaps, all of them also define the look of Brazil in general. The 3D models of landmarks, presented in our Rio de Janeiro flyover video, will help you to get a grasp on the true architectural and historical heritage of this place. We hope that photographs and historical facts will give you a better impression on each of these monuments. This information is also useful when making up your own excursion tour through Rio de Janeiro. 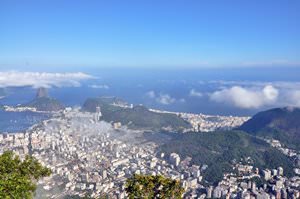 Facts:
» Christ the Redeemer statue in Rio de Janeiro is one of the most famous and popular monuments in the world. It even was chosen to be one of the New Seven Wonders of the World in 2007.
» The Christ statue sits atop Corcovado Mountain in Rio de Janeiro; that’s the symbol of Rio de Janeiro and Brazil as a whole.
» The height of the statue with pedestal is 38 meters, and arm span is 28 meters.
» Being the highest point of the county, the statue becomes a regular target of lightning, so the Catholic Diocese specifically stores the stone used for construction of the statue to repair damaged parts of it.
» Annually not less than 1.8 million tourists climb to the foot of the statue that offers panoramic view of the city and the bay. The picturesque Sugarloaf Mountain, famous beaches of Copacabana and Ipanema, and a huge bowl of the Maracana Stadium are seen from there. 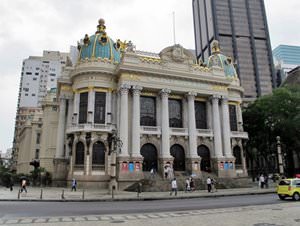 Facts:
» Teatro Municipal also known as the Municipal Theater of Rio de Janeiro was built in 1907.
» The theater is constructed in neo-Renaissance style; the Paris Opera was its prototype.
» The theatre draws attention with its splendor and luxury; it's reasonably considered one of the most gorgeous buildings in the city.
» Auditorium of the theatre is designed for 2,300 spectators.
» Walls of the theatre are marked with names of prominent cultural figures in Brazil and around the world.
» You can enjoy ballet performances and listen to classical music in Teatro Municipal. 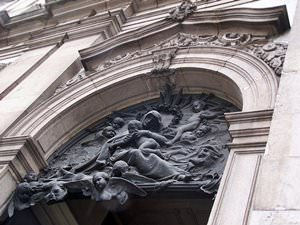 Facts:
» According to the legend, the Candelaria Church was built in the 17th century by Spanish master Antonio Palma.
» He and his crew sailed on Candelaria ship and got into a terrible storm. In honor of salvation in 1609 they built a small chapel dedicated to Our Lady of Candelaria.
» During the following centuries, the church has being altering and changing its appearance. Therefore, it combines a variety of styles, from Baroque to Neo-Classicism.
» As for the interior, in 1878 it was decorated in style Italian Neo-Renaissance.
» Today you can listen to classical and sacred music, and attend a church service in the Candelaria Church. 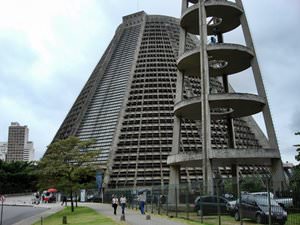 Facts:
» The Cathedral of the Blessed Virgin Mary of Carmel was built in the second half of the 18th century.
» It combines neo-Baroque and Rococo styles.
» In 1770 consecration of the temple was held.
» At the beginning of its history, the cathedral has served as the church of the Carmelites, but later (in1808) the church became a cathedral.
» Today the church features the cathedra and it's also called the Old Cathedral.

This guide to architecture monuments in Rio de Janeiro is protected by the copyright law. You can re-publish this content with mandatory attribution: direct and active hyperlink to www.orangesmile.com.
Rio de Janeiro - guide chapters 1 2 3 4 5 6 7 8 9 10 11 12 13 14 15 16

Search for architecture monuments of Rio de Janeiro on the map

Buenos Aires
Argentine National Congress is the building, where meetings of the National Congress of Argentina are held. National Congress Palace was built in the neoclassical style. An interesting feature of the building is a dome that is 80 meters high and weighs 30,000 tons. The dome of the National Congress is adorned with the crown with chimeras. The edges of the gable of the palace are decorated with sculptures of winged lions, and the emblem of ... Open »
Santiago
La Moneda Palace is the official residence of the President of Chile. La Moneda is literally translated as “coin” from Spain. The name is associated with the initial function of the building. There had been a mint before. The construction started to serve as a presidential residence only in 1846. The palace opened its doors to tourists in 2003. Today, you can admire the luxury interior of the palace and incredibly beautiful courtyards. ... Open »
Atlanta
The Georgia State Capitol was built on the site of the city hall in 1889. The exterior of the Capitol building in Atlanta is very similar to the Capitol in Washington. The government residence was equipped with elevators, water supply system, gas, which was an ultramodern innovation for that time. The Capitol building used to be the tallest in Atlanta – 83 meters. The golden dome is decorated with a small Statue of Liberty. The fourth ... Open »
Mexico
The high Catholic basilica of the Most Blessed Virgin Mary with a bell tower dates from the 16th century. It took two hundred years to construct it. The exterior is a mix of three architectural styles: Baroque, Renaissance, Neoclassicism. A tall construction made of grey stone and finished with white granite has two seventy-metre towers. It’s decorated with carved pillars and an arched entrance. The corner towers have 30 bells. The central ... Open »
Lisbon
The National Pantheon is one of the most impressive sights of Lisbon. This building was called the National Pantheon only in 1966, during the reign of dictator Antonio De Oliveira Salazar; previously it was the St. Engrasia Church. The church was built in the 12th century in Portuguese Baroque style. Interior of the construction complements the exterior. The floor and walls of the building are decorated with colored marble patterns, and the ... Open »
OrangeSmile.com - online travel reservation expert providing reliable car rental and hotel booking services. We feature more than 25.000 destinations with 12.000 rental offices and 200.000 hotels worldwide.
Secure Server