Sightseeing in Natal - what to see. Complete travel guide 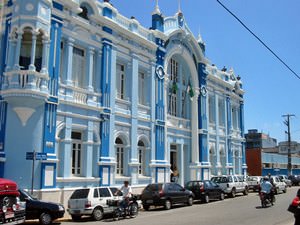 . The unofficial name of "The City of the Sun" fully reflects one of its main features - an amazing sunny climate. Indeed, the sun shines here almost all year round. A wide choice of picturesque beaches makes Natal a popular holiday destination among fans of water activities.
Best beaches and recreation areas around Natal
The main entertainment for the guests of Natal is beach recreation. The choice of coast areas available for comfortable rest is really huge here. Almost all the charming sandy beaches …

Open
The city was founded by Portuguese immigrants on December 25, 1599. The day of its foundation miraculously coincided with one of the most significant religious holidays in Portugal - Christmas. It was decided to name the new city in honor of the holiday: in translation from Portuguese Natal means "Christmas". The permanent population of the modern city is more than 800 000 people, a significant part of the locals is engaged in tourism.
The tourist sector remains one of the main economic spheres of the city, therefore its visitors are provided with all the favorable conditions. Natal is one of the few cities in the country that has managed to retain its authentic national charm. Since its foundation, the city had developed quite slowly, its active urbanization was triggered less than a hundred years ago. During the Second World War, a large air base was established in the city. Only after the end of hostilities, there have been some changes in the life of Natal. Copyright www.orangesmile.com
Top hotels in Natal for business trip or short vacation
One of the most unusual places to stay in Natal is Lua Cheia. This attractive hostel is in the immediate vicinity of Ponta Negra Beach. It is housed in a beautiful medieval castle that has …

Open
In the postwar period, the city became a major exporter of tropical fruits and seafood, local people were engaged in the cultivation of cotton, and the oil refining industry gradually developed. The picturesque nature and unique culture of the indigenous population began to attract to these places tourists from neighboring countries, the number of which has grown rapidly every year. Over a few decades, hundreds of hotels and hostels, large shopping malls, and restaurants appeared in Natal. Today the resort is perfectly suitable for people of different ages and preferences. 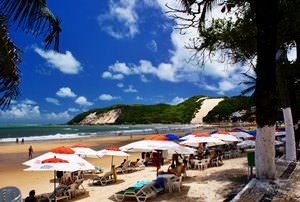 They will find beautiful beaches for every taste, interesting cultural sites, and historic landmarks, beautiful places for walking and secluded recreation. It is also worth noting that Natal has long attracted scientists from all over the world. Traces of prehistoric settlements were discovered in the vicinity of the city. Some of the archaeological sites are currently open to the public. Tourists addicted to the history of the ancient world will have a chance to see the rock drawings dating back thousands of years, explore the caves where ancient people once lived and see many priceless archaeological finds.
Shopping in Natal - main shopping streets, outlets and boutiques
If you are going shopping, remember that you should pay by card but not in cash in Brazil. Cashless payment is accepted even in the smallest stores here. If you try to pay with bills, you …

Open
Natal is an excellent destination for travelers who are fond of interesting excursions. The Fort of Three Kings is, without a doubt, the main historical symbol of the resort. This gorgeous protective facility was built at the beginning of the 17th century. The fort has a very unusual protective wall that is made in the shape of a star. The construction is incredibly strong and durable, and there is a reason for that. Whale fat is one of the main secret ingredients that have helped the fort to survive through centuries. Nowadays, the old fort hosts the exhibition of an interesting thematic museum dedicated to voyages and discoveries of famous explorer Vasco da Gama. 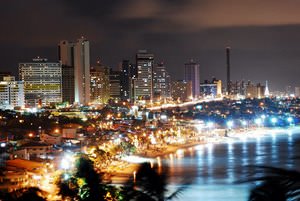 The historical district of Ribeira is an exciting place that is better to explore on foot. It is incredibly rich in old and interesting historical buildings. In total, there are more than 150 historical buildings in this part of the city. Some of these buildings are quite modest, and some are stunning and luxurious, such as colonial period villas in Victorian style. The governor’s palace, which dates back to 1873, is also located in Ribeira, as well as the beautiful town hall building. In the historical part of Natal, vacationers will also find the main theater of the city, which is considered to be one of the best in whole Brazil.
Family holidays with kids in Natal. How to entertain your child, things to show to children.
Natal is a popular holiday resort. Families with kids and teenagers will feel comfortable here. If you decide to go here with a small child, it will be better to look for hotels with …

Open
Casudo Museum is the best place to get acquainted with the history of the city. The museum exhibits numerous items that belong to different periods in the history of the city. For example, there is a very interesting collection of artifacts dedicated to cultural traditions of Amazonian Indians. Besides that, the museum exhibits a rich collection of geological items. A large part of the exhibition is dedicated to current ecological problems of the region. 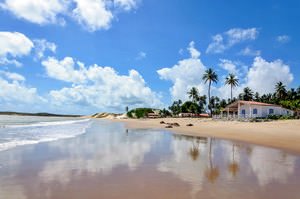 Church of Holy Mother Rozaria is by far the most eye-catching religious landmark of Natal. It is an interesting landmark not only from the religious but also from the cultural point of view. The church was built in the 16th century by the order of local colonizers. However, the beautiful building couldn’t keep its original look due to numerous earthquakes. During its long history, the church was thoroughly rebuilt four times. Nowadays, old religious artifacts inside the church are considered its main treasures. Visitors will be able to admire beautiful old frescos and see a collection of old icons.

This guide to iconic landmarks and sights of Natal is protected by the copyright law. You can re-publish this content with mandatory attribution: direct and active hyperlink to www.orangesmile.com.
Natal - guide chapters 1 2 3 4 5 6 7 8 9

City tours, excursions and tickets in Natal and surroundings

Survived castles around Natal
♥   Castle 'Castelo do Lua Cheia Hostel' , 8.2 km from the center. On the map

Football fans simply cannot leave Brazil without visiting Sao Paulo. This is where the legendary stadium Pacaembu is located. The “king of football” Pele played at this stadium. Many people call Sao Paulo a “miniature Chicago” because of numerous skyscrapers and buildings with glass walls. Many of these high rise buildings have observation decks installed on top floors. … Open

Search touristic sites on the map of Natal

Sightseeing in regions nearby Natal

Joao Pessoa
In the mid-17th century, Dutch occupants invaded the city. They changed the city’s name once again and called it Fredrikstad or Frederick City. Frederick of Orange was the Dutch ruler at that time, and so the town got its name after him. This was not the last name of Joao Pessoa. The documents dating back to 1817 used another name for this city - Parahyba do Norte. In the ... Open »
Recife
Why is Paiva considered the best beach in the region? Both locals and guests of the Brazilian city mention beautiful nature and clean water. Paiva Beach is always crowded and bustling during the tourist season. The sand is so soft here that there is no need to rent a sun lounger. On the days without strong wind, it is hard to think of a better beach for children. The waves ... Open »
Maceio
Year after year, the settlement was developing and expanding. The population of Maceio was increasing as well. Cultivating sugarcane became very popular in the region, and so big sugarcane plantations appeared near Maceio. Fruit tree gardens were also popular. In 1815, on December 5, to be precise, Maceio officially became a town. Just twenty-four years after that event, ... Open »
Fortaleza
Dragao do Mar is the cultural district of the city. You will also find several popular museums here. We simply cannot fail to mention Memorial Museum of Art and Culture that stands out from all cultural facilities of the city. You will also find a theater and a planetarium near it. The fans of active rest will also not get bored here - Dragao do Mar is the location of several ... Open »
Salvador
The city lies on the slope of the picturesque Bay of All Saints. Conventionally, the area of the modern city is divided into two parts - the Upper and Lower, connected by Lacerda Elevator (Elevador Lacerda). Both areas are equally interesting for travelers. The Lower Town is considered to be more modern, now its large part is occupied by colorful markets and shops. Here you ... Open »
Brasilia
The parts of this city are divided into several zones. In the so called ‘fuselage’ there is the main square of Three Powers, which is known as an example of strict and elegant style. ‘Wings’ of the plane are living quarters, where you will find trading centers, restaurants, and the main church in the city. The plane’s “head” is the location of Aurora Palace, ... Open »

All about Natal, Brazil - sightseeings, attractions, touristic spots, architecture, history, culture and cuisine. Prepare your trip together with OrangeSmile.com - find out the 'must see' things in Natal, which places to visit, which excursions to take, where the breathtaking views are waiting for you. Planning your trip with this travel guide will help your to get the most out of Natal in few days.