Sightseeing in Recife - what to see. Complete travel guide 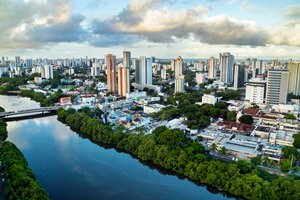 Recife is the capital of the Brazilian state of Pernambuco. This region is widely famous for its unforgettable beauty and picturesque views. Recife is currently a prosperous settlement that is comfortably located along the charming beaches of the Atlantic Ocean. Tourists from all over the world come to this city to sunbathe under the rays of the hot Brazilian sun, see numerous coral reefs, and visit the nearby islands. In Recife, old colonial buildings peacefully coexist with modern buildings and skyscrapers. There are many canals with bridges here, and this peculiarity is the reason why Recife is often called “the Venice of Brazil”.
The Tupi people were the first settlers in the territory of the modern resort. They were mostly engaged in fishing and hunting. Portuguese explorers and their leader Goncalo Coelho reached this region at the beginning of the 16th century. The explorers were quickly attracted by the rich deposits of the precious wood species, but aggressive aboriginal tribes forced Europeans to leave. In 1536, Duarte Coelho received a permit from the king to found the state of Pernambuco. This is when the capital of the state – Olinda – was built. Fifty-eight years later, the pirates from England plundered the capital and its neighborhoods. Local people decided to move to Recife and turned it into their new center.
There were several rebellions in the city during its long history. Local people were trying to get rid of the government that didn’t let them develop and live freely. The governments were changing but the result was still the same. Recife managed to turn into a prosperous city only at the beginning of the 20th century. Nowadays, this is an important industrial center in Brazil. In 1966, a guerrilla attack with an attempt to kill the military dictator Artur da Costa e Silva happened in Recife. Fourteen peaceful civilians were killed during the attack but the president wasn’t even injured. Copyright www.orangesmile.com
Nowadays, Recife is not only an economically advanced region of Brazil but also one of the best resorts in the country. Itamaraca Beach is one of the most visited beaches in Recife. This coastal area is situated on the nearby island. This is a spacious and well-kept beach covered with clean golden sand. To get to this beach, vacationers need to use the yacht that transports passengers between Recife and Itamaraca. The infrastructure of Itamaraca Beach is not impressive. There are many restaurants and cafes nearby but the beach itself doesn’t have anything. The coastal water also lacks cleanness. Despite these drawbacks, the beach is always crowded. 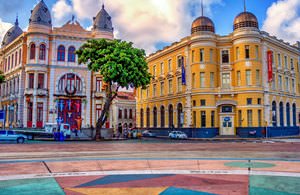 Paiva Beach is often recognized as the cleanest and most beautiful beach in Recife. This is a big coastal area, the length of which is roughly forty-six kilometers. Covered with gold sand and surrounded by a palm tree grove, Paiva is an excellent choice for vacationers with children and groups of tourists. Do you like surfing? High waves are quite typical for this beach, so it is possible to enjoy this popular water sport here. The water is shallow near the coast, and the bottom doesn’t have any sharp objects, making it comfortable and safe to relax on Paiva Beach. This beach also has a fairly developed infrastructure but there are many cafes and restaurants nearby.
Why is Paiva considered the best beach in the region? Both locals and guests of the Brazilian city mention beautiful nature and clean water. Paiva Beach is always crowded and bustling during the tourist season. The sand is so soft here that there is no need to rent a sun lounger. On the days without strong wind, it is hard to think of a better beach for children. The waves are so small at this time that mothers do not need to worry about the safety of their kids. If you wish, you can make an interesting journey to the underwater world of the Atlantic and see what the Brazilian coastal waters can offer to divers. 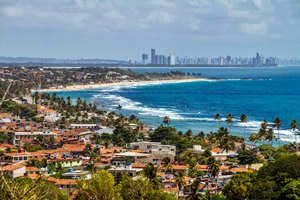 Diving enthusiasts will genuinely enjoy exploring an area with quite an odd name – the Pig Bay. The name is the only thing that ruins the picturesque and beautiful bay located not far from the Fernando de Noronha volcano. Majestic mountains and several small islands form a gorgeous and secluded bay. This is an incredibly romantic place. Although it is quite hard to reach this place, the efforts of vacationers will be greatly rewarded. The sea has different shades here, and incredibly beautiful views create an ethereal, fairytale view. It is dangerous to swim here because of the slippery stones, but diving in the bay is simply unforgettable.
There is an international airport near Recife that receives both domestic and international flights. It is possible to reach the “Venice of Brazil” from such cities as Sao Paolo, Rio de Janeiro, and Fortaleza. Airports in Madrid and Paris offer daily flights to the Brazilian resort. Besides that, there are charter flights from Helsinki and Amsterdam. Numerous intercity buses connect different Brazilian cities.
This guide to iconic landmarks and sights of Recife is protected by the copyright law. You can re-publish this content with mandatory attribution: direct and active hyperlink to www.orangesmile.com.

City tours, excursions and tickets in Recife and surroundings

Survived castles around Recife
♥   Castle 'Castelo do Instituto Ricardo Brennand' , 9.8 km from the center. On the map

National and city parks around Recife
♥   Park 'Parque Estadual De Dois Irmãos' , 8.8 km from the center. On the map

There is a small town of Buzios not far away from Rio. The town is mostly famous for its secluded bays, cosy parks and beautiful botanic gardens. … Open

Search touristic sites on the map of Recife

Sightseeing in regions nearby Recife

Joao Pessoa
Are you fond of surfing? If the answer is “yes”, there is a suitable beach for this purpose – Intermares. This beach is situated not far from Joao Pessoa. High waves and strong currents are typical for this area, allowing surfers to polish their skills here. If you only want to learn the basics of this water sport, there is a surfing school at the beach. Professional ... Open »
Maceio
Are you fond of beach activities? There is a special playground where everyone is welcome to play badminton and volleyball. Small children may also find it interesting to visit a special area where they can learn to make sand figures. If you decide to make a picnic near the ocean coast, Sobral Beach has a special area with numerous tables for cooking food. Fans of surfing and ... Open »
Natal
The city was founded by Portuguese immigrants on December 25, 1599. The day of its foundation miraculously coincided with one of the most significant religious holidays in Portugal - Christmas. It was decided to name the new city in honor of the holiday: in translation from Portuguese Natal means "Christmas". The permanent population of the modern city is more than 800 000 ... Open »
Fortaleza
Jose de Alencar Theater is one of the most popular facilities of this place. The theater is surrounded by a beautiful park. You visit to Museum of Ceara will be surely an unforgettable one as here you will find over 7000 ancient artifacts. Ten rooms of the museum represent several collections of furniture, clothing, jewelry and many other antiques. Another historical monument ... Open »
Salvador
Cultural symbols of the city include the martial art of "Capoeira ". It is believed that Salvador is one of the cities where it originated. Capoeira is a cross between classical martial arts and Brazilian dances. Performances of capoeira masters are extremely popular among visitors to the city. It is believed that capoeira is much more popular than football in Salvador. ... Open »
Belo Horizonte
The history of Belo Horizonte started in 1701. Initially, there was a cattle farm on the site of the modern city. The area was developing quickly, and so new settlers started moving to this region. The peaceful and tranquil settlement was slowly growing in size. Everything was fine until the start of the rivalry between different regions of the country, which took place in ... Open »

All about Recife, Brazil - sightseeings, attractions, touristic spots, architecture, history, culture and cuisine. Prepare your trip together with OrangeSmile.com - find out the 'must see' things in Recife, which places to visit, which excursions to take, where the breathtaking views are waiting for you. Planning your trip with this travel guide will help your to get the most out of Recife in few days.