«« BEGINNING - PART I
Video of flights over top monuments of Santiago in HD format.
Use 'Full Screen' mode.
Let’s move further. The upcoming famous architecture monuments of Santiago that deserve to be mentioned are La Moneda Palace, Central market, San Cristobal Hill, Municipal theater, and National Museum of Fine Arts. An overview of interesting facts and a collection of photographs are available for each monument. In order to plan a route for your real-life sightseeing tour in Santiago, use our interactive map of sights in of Santiago that is available below this article. 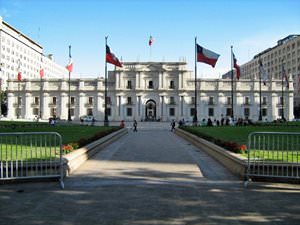 Facts:
» La Moneda Palace is the official residence of the President of Chile.
»  La Moneda is literally translated as “coin” from Spain. The name is associated with the initial function of the building. There had been a mint before. The construction started to serve as a presidential residence only in 1846.
»  The palace opened its doors to tourists in 2003. Today, you can admire the luxury interior of the palace and incredibly beautiful courtyards.
»  Not so long ago, a square was set up. There is a culture center and a monument to President Arturo Alessandri.
»  If you visit La Moneda in the morning on odd days, you will see the changing of the Guards. This process is really impressive. 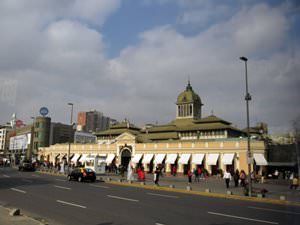 Facts:
» The colorful Central Market is a popular tourist attraction in Santiago.
»  The economy of the country depends on the export volume of fruit, vegetables, and seafood. In the market, you can find everything Chile exports.
»  In the noisy and crowded market, you can buy everything you need but the choice of seafood is especially impressive.
»  There is also a cafe where you can taste fresh bounties of the sea and popular dishes of the Chilean cuisine, for example, eel soup and ceviche.
»  The steel frame of the market was made in England and was mounted here in 1868. 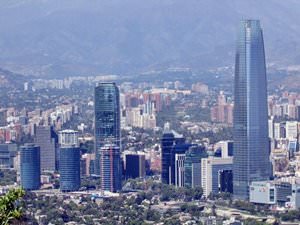 Facts:
» San Cristobal Hill is the highest point in Santiago.
»  On the hill, there is a 36-meter statue of the Virgin Mary who is considered as a local patroness. There is the Metropolitano Park around it.
»  On the hill, there are also an observation platform, a botanical garden, a wine museum, and a zoo. At the foot of the hill, there is a museum dedicated to Pablo Neruda, a famous Chilean writer and Nobel Prize Laureate.
»  Every year, concerts are held in the open air on the platforms.
»  San Cristobal Hill is citizens’ favorite place for walks and one of the main attractions in the city.

Facts: » The Teatro Municipal, National Opera of Chile is located in Santiago. It is a popular city attraction due to the neoclassical building it occupies. The festive opening ceremony was held in 1957.
»  In December 1870, the city was almost destroyed by a large fire. Thanks to the local authorities and Chilean people, the theater was restored in 1873.
»  Later in 1906, the Municipal Theater was damaged by a serious earthquake. Most of its interior elements were lost. In 1927, there was a fire again. In both cases, the building was reconstructed fast.
»  Nowadays, the theater is one of the national architectural and historical monuments in Chile. It is the best theater in the country and one of the best on the continent.
»  The Municipal Theater attracts tourists with its design and performances.

Facts: » The National Museum of Fine Arts is located in Santiago and was founded on September 18, 1880. It is the oldest museum in South America.
»  Since 1910, the museum has been occupying a palace that was built in honor of the hundredth anniversary of the independence of Chile. In April 1976, the building of the museum was recognized as a historic monument.
»  The museum collection contains over three thousand exhibits, including paintings, sculptures, sketches, and etchings. Here, you can mostly see masterpieces of Chilean artists.
»  At the same time, the museum houses a lot of works of famous foreign masters, Spanish and French artists and sculptors.
»  The Italian sector presents 60 paintings, most of which were painted from the middle of the 19th to the beginning of the 20th century.
»  The museum also houses the small collection of 46 kakemonos, scrolls painted with ink or watercolor. Some scrolls were gifted by the Chinese Embassy in 1968. You can also see here 15 statuettes from Black Africa and 27 Japanese etchings.

This guide to architecture monuments in Santiago is protected by the copyright law. You can re-publish this content with mandatory attribution: direct and active hyperlink to www.orangesmile.com.
Santiago - guide chapters 1 2 3 4 5 6 7 8

Plan your own tour over Santiago on the monuments map 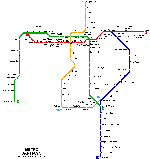 Search for architecture monuments of Santiago on the map

Tours through neighbours of Santiago

Buenos Aires
Argentine National Congress is the building, where meetings of the National Congress of Argentina are held. National Congress Palace was built in the neoclassical style. An interesting feature of the building is a dome that is 80 meters high and weighs 30,000 tons. The dome of the National Congress is adorned with the crown with chimeras. The edges of the gable of the palace are decorated with sculptures of winged lions, and the emblem of ... Open »
Rio de Janeiro
Christ the Redeemer statue in Rio de Janeiro is one of the most famous and popular monuments in the world. It even was chosen to be one of the New Seven Wonders of the World in 2007. The Christ statue sits atop Corcovado Mountain in Rio de Janeiro; that’s the symbol of Rio de Janeiro and Brazil as a whole. The height of the statue with pedestal is 38 meters, and arm span is 28 meters. Being the highest point of the county, the statue becomes ... Open »
Mexico
The high Catholic basilica of the Most Blessed Virgin Mary with a bell tower dates from the 16th century. It took two hundred years to construct it. The exterior is a mix of three architectural styles: Baroque, Renaissance, Neoclassicism. A tall construction made of grey stone and finished with white granite has two seventy-metre towers. It’s decorated with carved pillars and an arched entrance. The corner towers have 30 bells. The central ... Open »
Houston
The Reliant Astrodome is the first stadium with adjustable environmental parameters. It is also the first indoor stadium with a dome. Its roof was aimed at protecting the stadium from the heat rather than the rain. However, the roof obstructed the growth of natural grass in the field, so the ground was covered with experiment nylon. At the stadium, not only baseball, basketball, football, boxing competitions, but also different entertainment ... Open »
Atlanta
The Georgia State Capitol was built on the site of the city hall in 1889. The exterior of the Capitol building in Atlanta is very similar to the Capitol in Washington. The government residence was equipped with elevators, water supply system, gas, which was an ultramodern innovation for that time. The Capitol building used to be the tallest in Atlanta – 83 meters. The golden dome is decorated with a small Statue of Liberty. The fourth ... Open »
OrangeSmile.com - online travel reservation expert providing reliable car rental and hotel booking services. We feature more than 25.000 destinations with 12.000 rental offices and 200.000 hotels worldwide.
Secure Server