Sightseeing in Santos - what to see. Complete travel guide 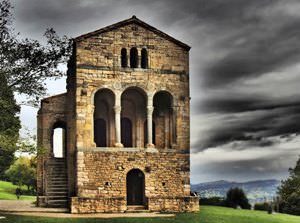 Santos is a beautiful Brazilian port city located in Baía de Todos os Santos. The land here is very fertile and the nature is beautiful, so the continent has quickly attracted European settlers. Indian tribes, which originally lived in this area, did not resist the emergence of newcomers and even contributed to the settlement and development of the town.
Santos is known for its beautiful, rich and fertile terrain, on which is grown one of the best sorts of coffee – Bourbon. This coffee has a sophisticated bitter-sweet, slightly buttery flavor with a slight acidity, which is not found in the ordinary Santos. The city is cut by small bays, but the length of the beach surrounding the city is striking with its length. Santos offers visitors a wide range of things to do and things to see. The city features a large number of interesting museums: Museum of Coffee, Marine Museum, Museum of Religious Art, and Museum of Fishing. Tourists are always welcome to visit old churches that are open to the public - the cathedral designed in the neo-gothic style, Santo Amaro Castle, as well as a magnificent botanical garden and the zoological park named Orkidario, the city aquarium with rare representatives of the ocean.
Santos also provides visitors with numerous services for those who want to spend holidays in an active way: the incredible, full of impressions yacht riding, rides on boats and cutters in Baía de Todos os Santos bay, fishing in the Lagoa da Saudade lake, rafting and eco-tours to the surrounding forests, as well as wide choice of beach games, one of which is tamboreu - a game invented by the Donadelli brothers, which is something close to volleyball and badminton. Copyright www.orangesmile.com
The Museum of Coffee is the most visited site in the city. It occupies an incredibly beautiful historic building. Once, there located a coffee exchange. After many years it maintained its unique architecture and is of great architectural value today. The building has beautiful stained-glass windows and collections of old furniture, as well as devices that used to weigh coffee. Today, the museum is complemented by thematic modern paintings. Tourists like to have their pictures taken against them. 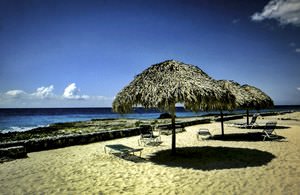 Linha Turística de Bonde tram is an original symbol of the city. A trip by tram will create the unforgettable impressions. They fully saved the finish of the past times in miniature green carriages. You can even enjoy old posters. Trams run through the city and drive by symbolic places and attractions. Such a trip will be a perfect solution for those who want to quickly inspect all the important places of Santos.
Monte Serrat mountain enjoys great popularity among lovers of hiking. A wonderful park and numerous places for recreation spread out on its top. You can go by old cable railway and admire lush exotic vegetation and panoramic views of the city. At the top of the mountain, there are some excellent viewing platforms. Several historical sights survived there. You can see the building of an old casino and visit a miniature old church. 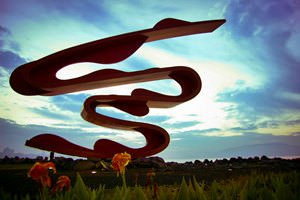 Fans of history prefer walking around the ancient fortress of Santo Amaro. It was built to protect the coastal territory from numerous conquerors. The fortress has been perfectly preserved to this day. Even the impregnable walls survived. Visitors are allowed to look into its most remote corners and climb up the fortress wall to appreciate the view from the city.
There is a beautiful aquarium in Santos. Tourists with children are its main visitors. Here, you can admire exotic colorful fish, sea predators, and deep-sea inhabitants whose appearance seems really fantastic.
This guide to iconic landmarks and sights of Santos is protected by the copyright law. You can re-publish this content with mandatory attribution: direct and active hyperlink to www.orangesmile.com.

City tours, excursions and tickets in Santos and surroundings

Survived castles around Santos
♥   Castle 'Baruel Mansion' , 58.6 km from the center. On the map

National and city parks around Santos
♥   Park 'Parque Natural Municipal Nascentes De Paranapiacaba' , 19 km from the center. On the map

Sights around Santos from our guide 'Extreme places on Earth' 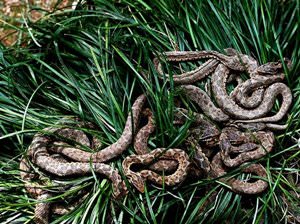 Distance from Santos center - 69.1 km.
For hundreds of years, snakes have been the main inhabitants of the island. By rough estimates, one square meter of land is home to 5 deadly snakes. For this reason, even landing on the coast is considered to be extremely dangerous, not to mention walking there. The only building on the island is a lighthouse, which is controlled automatically. Many horror stories and legends are shared among residents of Ilha da Queimada Grande. In recent years, the island really lost a great number of people, including fishermen, as well as the whole family of a lighthouse keeper. At the same time, the island is still the center of attraction for researchers from around the world. They risk their lives in order to see one of the most dangerous places on the planet. … Read further 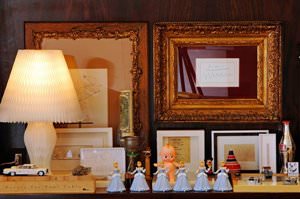 Distance from Santos center - 55.2 km.
Marcio Kogan's apartment is located in a high-rise building. It was designed by the architect himself in 1980. He chose an apartment for himself on the top floor. One of its main advantages is a gorgeous panoramic view of the city. The building in which the architect's apartment is located is special for him. Its construction became one of the largest and most important projects for the architect at the very beginning of his career. He considers the building project to be the beginning of his successful career. … Read further

Search touristic sites on the map of Santos

Sightseeing in regions nearby Santos

Sao Paulo
Sao Paulo is the undercover capital of Brazil and its economic center. Originally the city was considered the territory and the home of the Indians, but after the depletion of land resources in Rio de Janeiro the population of this place began to grow. In the end of XVIII century the refugees from Italy and Japan started moving to Sao Paulo, creating plantations of coffee and ... Open »
Ilha Grande
The capital town of the island is Abrar. There are at least one hundred homes on its territory. The city hosts the colorful music festivals one after another, so it will be interesting to visit at any time of year. Castelhanos Lighthouse, which is surrounded on all sides by lush thickets of trees, is among the amazing architectural landmarks. It’s interesting to explore Dois ... Open »
Rio de Janeiro
The Statue of Jesus. The very top of Corcovado Mount has become the location of a huge statue of Jesus. The statue is known as the symbol of Rio de Janeiro. Jesus, who hovers over the city with his arms stretched, is visible from any part of Rio. It is possible to get to Corcovado Mount by train, minibus or taxi. The view, which you will see from the top, is truly ... Open »
Curitiba
Are you searching for a romantic place to visit? In this case, you should visit Tangua Park that is the main recreational area in the city. The opening of this park took place in 1996. There are still two old quarries that are now fully drowned. A tunnel, the length of which is forty-five meters, connects the quarries. Visitors can make a boat ride in the tunnel. Pedestrians ... Open »
Balneario Camboriu
Do you like wild places without any tourist infrastructure? In this case, the gorgeous Taquarinhas Beach is the right choice. This is a beautiful strip of sand at the Atlantic Ocean coast. The coastal water is so clear that it is easy to see the underwater world without any special gear. Local nature is also picturesque and charming. Vacationers can always enjoy swimming and ... Open »
Florianopolis
They are sure to be pleased with a worthy choice of high-class beach hotels. Rest on the picturesque beaches remains a favorite entertainment for many travelers. The charming city locally known as Floripa appeals not only to beach holiday fans. It is ready to offer its guests a rich excursion program. The variety of historic landmarks located in the city can amaze even ... Open »

All about Santos, Brazil - sightseeings, attractions, touristic spots, architecture, history, culture and cuisine. Prepare your trip together with OrangeSmile.com - find out the 'must see' things in Santos, which places to visit, which excursions to take, where the breathtaking views are waiting for you. Planning your trip with this travel guide will help your to get the most out of Santos in few days.