Sightseeing in Joao Pessoa - what to see. Complete travel guide 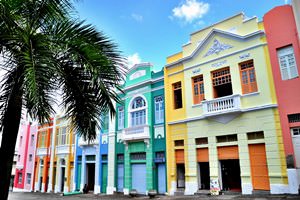 In East Brazil, on the coast of the Atlantic Ocean, tourists will find the marvelous city of Joao Pessoa. What is so special about this settlement? There is no other city in the world that has so many parks and green areas. Paris is the only city that defeats Joao Pessoa in this category. Moreover, Joao Pessoa is the oldest city in this part of Brazil. In this enchanting city, tourists can see how tropical beaches and park areas miraculously co-exist with modern architecture and historical buildings. In the capital of Paraiba State, tourists can relax and sunbathe, as well as enjoy sightseeing.
The city was founded on August 5, 1585. Initially, Joao Pessoa had another name - Royal City of Our Lady of the Snows. Three years later, the city changed its name to Philipeia of Our Lady of the Snows in the name of Philip II who became a king at that time. Needless to say, the name was very long and this is the reason why many historic documents mention the short name of the settlement – Philipeia.
In the mid-17th century, Dutch occupants invaded the city. They changed the city’s name once again and called it Fredrikstad or Frederick City. Frederick of Orange was the Dutch ruler at that time, and so the town got its name after him. This was not the last name of Joao Pessoa. The documents dating back to 1817 used another name for this city - Parahyba do Norte. In the 30s of the 20th century, the governor of Paraiba, Joan Pessoa, was killed. After this event, it was decided to call the city in his honor. This is the last name that is adopted nowadays. Copyright www.orangesmile.com
Bessa Beach is the most popular in Joao Pessoa. This is a public beach within the city borders. It is hard to think of a better place to swim in Joao Pessoa. Bessa Beach consists of numerous mini-beaches scattered in the seven-kilometer-long coastline. All of these beaches have the same name. Do you want to relax and enjoy trouble-free moments? In this case, Bessa is the best choice that will satisfy you. Even though this is a city beach, there are not many tourists and locals at Bessa, so vacationers can sunbathe in a comfortable area away from noise and crowds of people. There are many clubs and restaurants along the beach, so it is equally interesting to stay at Bessa in the daytime and at night. 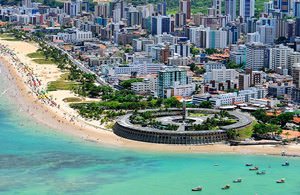 If you want to visit another coastal area that is no less popular than Bessa Beach in Joao Pessoa, you need to make a twenty-five-kilometer-long ride to Carapibus Beach. This area is particularly mesmerizing during the low tide because there are naturally formed pools with warm water and corals. If you visit this beach during the low season, you will find an area with pristine nature that is reminiscent of a desert. However, the area doesn’t lose its beauty and looks striking all year round.
During the tourist season, numerous tents and camps cover the territory. The beach area becomes crowded, and local merchants arrive and try to sell their souvenirs to vacationers. Carapibus Beach is suitable for tourists with children because the coastal water is calm. Coral reefs safely protect the area, forming a natural barrier. Many tourists like this beach the most, and this fact made local authorities to start building a hotel complex here. 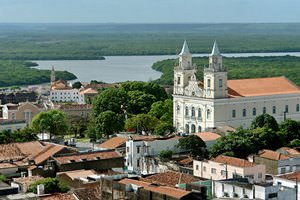 Are you fond of surfing? If the answer is “yes”, there is a suitable beach for this purpose – Intermares. This beach is situated not far from Joao Pessoa. High waves and strong currents are typical for this area, allowing surfers to polish their skills here. If you only want to learn the basics of this water sport, there is a surfing school at the beach. Professional coaches are always ready to share their knowledge with tourists. Finally, it is not rare to see turtles at Intermares Beach. These sea animals often come to the beach to lay their eggs here.
When sunbathing becomes boring, it is time to visit the Botanical Garden located in the central part of Joao Pessoa. This is the world’s biggest forest area within the city borders. While taking a stroll in the shadowy parkways, you will get acquainted with Brazilian flora and Atlantic old-growth forest. Tourists need to remember several simple rules during their visit to the Botanical Garden. For example, the city’s authorities do everything possible to preserve the old forest, and so visitors can walk in this “green paradise” only together with a guide. That being said, a journey to the most hidden parts of the Botanical Garden is an unforgettable experience that people cherish in their memory. 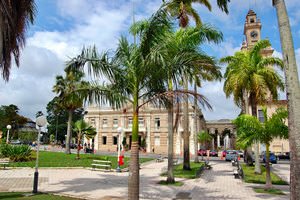 There is an international airport in Joao Pessoa. However, not all European countries have direct flights to this Brazilian city. Many tourists prefer to fly to Rio de Janeiro first. After that, they take a domestic flight to Joao Pessoa. The journey will be not fast – it can take one day or even longer to fly to Joao Pessoa from Europe. Upon arrival at the city’s airport, get on a bus that goes to the city center.
This guide to iconic landmarks and sights of Joao Pessoa is protected by the copyright law. You can re-publish this content with mandatory attribution: direct and active hyperlink to www.orangesmile.com.

City tours, excursions and tickets in Joao Pessoa and surroundings

A country of colourful carnivals and festivals, Brazil attracts guests not only because of its fantastic celebrations, but also with its numerous places of interest. The capital of Brazil, Rio de Janeiro, remains the most visited city of the country. Without a doubt, Rio is internationally known by its symbol – the Statue of Christ the Redeemer that is located on the top of Corcovado Mountain. The statue is a part of National Park that occupies a plot of land of more than 3 thousand hectares. There are more than ten interesting museums in Rio de Janeiro. Tourists are recommended to visit the Museum of Modern Art, the Museum of Indians, the National Museum of Fine Arts, Ethnographic Museum, the Museums of History and Art, the Museum of Stones and the Museum of Republic. Guanabara Bay is considered the most beautiful place of the capital and features fantastic views. … Open

Search touristic sites on the map of Joao Pessoa

Sightseeing in regions nearby Joao Pessoa

Recife
Diving enthusiasts will genuinely enjoy exploring an area with quite an odd name – the Pig Bay. The name is the only thing that ruins the picturesque and beautiful bay located not far from the Fernando de Noronha volcano. Majestic mountains and several small islands form a gorgeous and secluded bay. This is an incredibly romantic place. Although it is quite hard to reach ... Open »
Natal
The charming Brazilian city of Natal is the capital of the state of Rio Grande do Norte. The unofficial name of "The City of the Sun" fully reflects one of its main features - an amazing sunny climate. Indeed, the sun shines here almost all year round. A wide choice of picturesque beaches makes Natal a popular holiday destination among fans of water activities. The city ... Open »
Maceio
The area of the Brazilian megalopolis was discovered by European naval explorers in 1609. Having stepped on this land, Europeans quickly noticed that this region is perfectly suitable for agriculture. The first settlement on the site of modern Maceio appeared soon after the discovery. Slowly, immigrants from different European countries started settling in Brazil. They were ... Open »
Fortaleza
The center of the city is mostly notable for its old buildings. All houses have been restored and today numerous restaurants, shops and bars are located in them. When it comes to describing architectural places of interest, it is worth mentioning Metropolitana Katedrala Cathedral built in 1978. This is one of the most beautiful buildings of the city. The height of the ... Open »
Salvador
The museum city of Salvador is the capital of Bahia state. it is considered the most "African" city of Brazil and is one of the most densely populated cities in the country. Founded in 1549, Salvador was the capital of Brazil until the middle of the 18th century. Currently, its main treasure is the preserved monuments of colonial times. Salvador is an invaluable well of ... Open »
Brasilia
Take a walk in Brasilia and you will be amazed by shapes of buildings on your way. They look more like artworks than ordinary business centers or living complexes. The peak of the local cathedral is decorated with a huge crown that signifies people raising their hands while praying. One more advantage of this city is the quality of its roads. All roads are of a great quality ... Open »

All about Joao Pessoa, Brazil - sightseeings, attractions, touristic spots, architecture, history, culture and cuisine. Prepare your trip together with OrangeSmile.com - find out the 'must see' things in Joao Pessoa, which places to visit, which excursions to take, where the breathtaking views are waiting for you. Planning your trip with this travel guide will help your to get the most out of Joao Pessoa in few days.