Detailed hi-res maps of Quebec for download or print 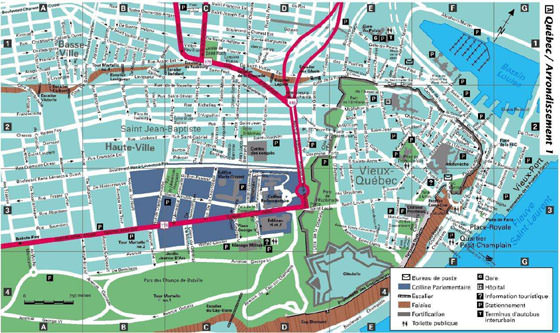 The actual dimensions of the Quebec map are 1263 X 750 pixels, file size (in bytes) - 263328. You can open this downloadable and printable map of Quebec by clicking on the map itself or via this link: Open the map. 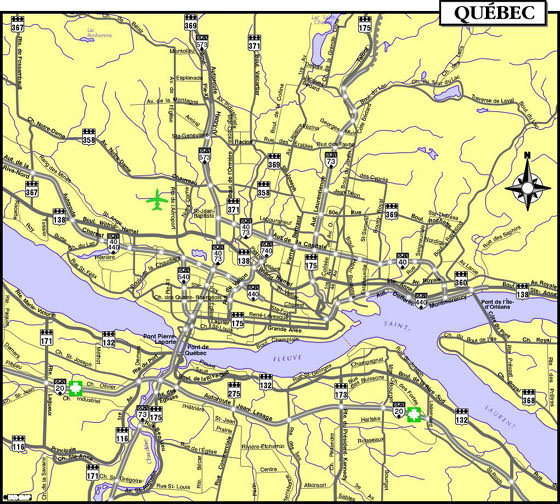 Due to the fact that Canada has a fairly large territory with a difficult terrain, the “Funicular” is quite common. Although one of the oldest means of transportation around the country, it unites the Upper and Lower towns. Initially, this transport was water-powered, but today it is successfully operating by electricity. It should be noted that the funicular is not only a convenient and fast mode of transport, but also provides an excellent opportunity to admire the local beauties from a height. If you are planning long trips, it is best to use air transport. You can reach just about any destination in the country by air. Canada’s major airlines are Air Canada and Canadian Airlines. The cost of flights is however quite high, but regular promotional offers and sales are conducted on air tickets, thus attracting many tourists to the country. … Open

At present, Canada is one of the most developed countries in terms of economy. The standard of living of the local population of Canada is quite high, and in terms of its rates of development, may be inferior only to the United States of America. It is worth noting that such a high economic development is associated with many factors, first of all, with the location of the country. There is a huge amount of natural resources within her territory that the country uses competently. Also, Canada, during her formation, established a very close relationship with France and the United States of America, as well as the United Kingdom. This makes it possible to conduct active trade relations. It is in Canada that the United States of America sells a huge amount of products, which makes it possible to constantly raise the level of the country’s GDP. … Open

Search for services, infrastructure and sights on map of Quebec

Our guide chapters over Quebec

The largest city of the province is Montreal, the capital of culture in Quebec. Since 1977, Montreal has been the permanent venue for annual International Film Festival, as well as for the International Jazz Festival. The Latin Quarter with its numerous cafes and restaurants is the most visited area of ​​the city. Almost every day, they are literary evenings and musical concerts, so the Latin Quarter would … Open

Vacationers would like the picturesque town of Laval. It is famous due to the Armand-Frappier museum with its exposition devoted to microorganisms. There is also the space study center, Cosmodome, which is open to the public and offers its guests a very interesting and informative program. The permanent symbol of the charming town of Gatineau is the Canadian Museum of History; for many years, it has remained the … Open

One of the most beautiful urban parks of the province is situated in Laval; Le Centre de la nature occupies an area of ​​over 50 hectares. There is also an attractive destination for fans of water sports. Parc de la riviere-des-Mille-Iles features great infrastructure and high environmental performance. Gamblers should definitely visit the city of Gatineau; here is one of the most famous casinos in the … Open

The vast part of popular restaurants can be found in Quebec City. Those who wish to enjoy classic national food have to look into the Aux Anciens Canadiens restaurant, where the choice of meat dishes is just enormous. Treats are cooked of deer, buffalo and caribou; it is difficult to imagine that these exotic meat delicacies are considered familiar and favorite food among natives. Fans of French cuisine are sure to … Open

The first carnival was held in 1894; since then it has become one of the biggest holidays of the country, which is attended by well-known artists, athletes, chefs and actors. Quebec City attracts travelers in early February; Montreal draws attention to curious travelers at the end of the month. In the last week of the month the Festival of Lights is held; the holiday is also sure to please fans with noisy and … Open

Quebec is one of those tourist places that are visited at any time of the year. In the summer period, the weather in the province is warm and sunny. At this time, it attracts fans of hiking tours, active recreation, and beach entertainments. In summer, many interesting holidays and festivals are also held in local cities. You can witness all of them absolutely for free. In autumn, local resorts are visited by … Open