Cuisine of Quebec for gourmets. Places for dinner - best restaurants 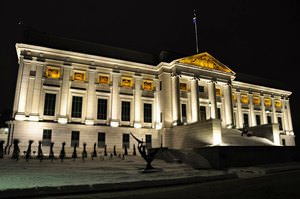 National cuisine of this scenic Canadian province is very interesting. The popularity of fast food inspired by North America gradually recedes. Today, natives increasingly prefer classic local dishes, which have been popular for hundreds of years ago. There are lots of large farms in Quebec producing high quality organic meat and dairy products. The province is home to popular varieties of cheese; brie and camembert are produced there following classic old recipes.
Advices to travellers: what you should know while being in Quebec
1. Tourists who plan to visit Quebec in winter have to consider their clothes precisely. Winters are quite cold and snowy, so the warm outfit and footwear is mandatory. Local residents have …

Open
Meat treats are common to the local menu; all meat dishes are very hearty and quite simple. Guests of the province have to taste domestic meat pie, québecoise tourtière; it is a true classics of local cuisine. Hearty potato remains one of the most common side dishes; fans of French fries have to taste poutine. Those are delicious fried potatoes with cheese and tasty sauce.
The vast part of popular restaurants can be found in Quebec City. Those who wish to enjoy classic national food have to look into the Aux Anciens Canadiens restaurant, where the choice of meat dishes is just enormous. Treats are cooked of deer, buffalo and caribou; it is difficult to imagine that these exotic meat delicacies are considered familiar and favorite food among natives. Fans of French cuisine are sure to enjoy vacationing in Quebec, as restaurants of this culinary tradition can be found at every step. Copyright www.orangesmile.com
Guide to Quebec sightseeing - things to see and to visit
Quebec is the largest province in Canada. Charming Montreal and quiet rural towns, magnificent pine forests, lakes and waterfalls have made ​​the province a popular tourist destination. …

Open
Today, many classic treats feature unique French accents. Among popular dishes, terrine of smoked salmon and cheese, as well as delicious onion soup is notable. Seafood dishes also deserve the highest praise; local fishermen catch great shrimp and various fish species. However, fishing is under strict control in Quebec. Natives consider beer to be their national drink, while many travelers purchase maple syrup as a souvenir. It is taken from sugar maple in spring; this tradition was inherited from the Indians. It is a very complex and interesting process.

This guide to cuisine and restauraunt in Quebec is protected by the copyright law. You can re-publish this content with mandatory attribution: direct and active hyperlink to www.orangesmile.com.
Quebec - guide chapters 1 2 3 4 5 6

Canadian cuisine is a symbiosis of the cuisines of indigenous peoples of North America, emigrants from France, England, and China. As such there are no national dishes in the country. Its kitchen consists of borrowed recipes of different peoples. Canada is a bi-national country; the influence of French and English cultures is clearly traced in the formation of its cuisine. Canada is a country created by emigrants, and therefore in local cafes and restaurants you can see a huge amount of dishes from different countries of the world. Even the Canadians call their kitchen a "buffet", which presents dishes for every taste: from Ukrainian borscht with pampushka to French frog legs. The most famous dish of Canadian cuisine is maple syrup. … Open

Searching where to eat - restaurants and cafe on Quebec map

Cuisine and restaurants in the neighbours of Quebec

Quebec City
The menu of Monte Cristo consists solely of gourmet food. The restaurant traditionally attracts a lot of fans of fine dining. This prestigious restaurant has its own wine cellar, which stores several hundred sorts of the beverage, including rare and collectible bottles. The Napa restaurant offers a wide choice of dishes cooked on the grill. During warm months of year its ... Open »
Ontario Province
Hamilton is ready to offer its guests a decent selection of dining places. Budget travelers should definitely look into the restaurant J Anthony Grille & Catering. It specializes in international cuisine; for just $15-20 guests can enjoy delicious Italian, French and even Caribbean dishes. Popular Spanish appetizers, tapas, are also served there. The restaurant has very ... Open »
Montreal
One of the main dignities of the city of Montreal is a vast selection of gastronomy establishments. Even a sophisticated gourmand will be challenged to choose a proper place to eat among various restaurants and cafes. A short gastronomy tour over the city will help tourists to make up one’s mind and choose a place for recreation. Among prestigious gastronomy establishments ... Open »
Ottawa
A vast selection of pastry and cakes, fruit desserts and ice creams as well as rich selection of cocktails will be of great pleasure for sweets addicts. All the treats served in the Stella Luna café feature original artistic setting. Pizza fans will love the DiRienzo Foods restaurant which offers a vast choice of sandwiches and fresh salads apart from popular Italian treat. ... Open »
Toronto
Toronto is a real godsend for fans of gastronomic tourism. That’s difficult to imagine, but there are more than three and a half thousand dining places in this modern city. Luxury restaurants and modest bistros, colorful cafes, trendy bars and pubs - even an experienced traveler may lose in this diversity. Among the thousands of places travelers point out the German ... Open »
Niagara Falls
The Charles Inn restaurant offers its visitors to try a rich choice of popular dishes of ethnic cuisine. The favorite treat of the regular guests of the eating house is hamburgers. The restaurant will suit those guests who strive for rest after an exhausting day of exploration of the city. There tourists will find a vast choice of desserts and refreshing drinks. Grilled foods ... Open »

Travel notes on best cuisine and restaurants of Quebec (Canada) on OrangeSmile.com. Famous recipes and traditional dishes and courses in Quebec restaurants. Where to eat - our recommendations on popular places in Quebec, where you can taste delicious meal and also spend a good time with your friends.