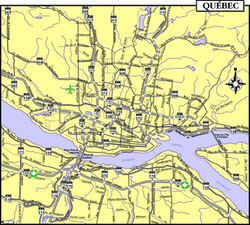 Interactive maps of hiking and biking routes around Quebec

1. You can zoom in/out using your mouse wheel, as well as move the map of Quebec with your mouse.
2. This interactive map presents two modes: 'Biking Routes' and 'Hiking Routes'. Use the '+' button on the map to switch between them.

This Quebec map has two modes: 'Railway Network' and 'Landscape & Rural Map'. Use the '+' button on the map to navigate.

In the north-west area, 22 kilometers from the city of Toronto, is situated the largest and most popular airport in Pearson. You can get to Toronto by electric trains, taxis, limousines, and express buses (the advantage of this option is that the passenger is conveyed to the designated point in half an hour). In the waiting room of the departure area, passengers can go shopping and buy everything they need, including souvenirs, have a snack in a cafe, charge their gadgets, and use the free Internet at the airport. Pearson Airport accepts both domestic and international flights. Passengers check-in as well as baggage check-in begins two hours before the flight and ends forty minutes before the flight. With regards to documents for registration, you need a passport and a ticket. You can also purchase an e-ticket, and all you will need to do that is your passport. … Open

Vuntut National Park is located in Yukon, on the border with Alaska. The name of the park means "among the lakes". On its territory there are hundreds of lakes of different sizes. The fauna is represented by reindeer caribou on which hunting has always been conducted on the territory of the park, as well as bears, wolverines, lynxes, mink, foxes, and martens. In Nahanni National Park, located in the Mackenzie Mountains, there is another well-known waterfall of the country - Virginia. Its height is 90 meters, almost twice as high as that of Niagara Falls. The park occupies the canyons of the South Nahanni River, from which incredibly picturesque views are opened. The park has become a habitat for approximately 500 grizzly bears under the protection of the state. … Open

Our guide to Quebec

One of the most beautiful urban parks of the province is situated in Laval; Le Centre de la nature occupies an area of ​​over 50 hectares. There is also an attractive destination for fans of water sports. Parc de la riviere-des-Mille-Iles features great infrastructure and high environmental performance. Gamblers should definitely visit the city of Gatineau; here is one of the most famous casinos in the … Open

National cuisine of this scenic Canadian province is very interesting. The popularity of fast food inspired by North America gradually recedes. Today, natives increasingly prefer classic local dishes, which have been popular for hundreds of years ago. There are lots of large farms in Quebec producing high quality organic meat and dairy products. The province is home to popular varieties of cheese; brie and camembert … Open

The first carnival was held in 1894; since then it has become one of the biggest holidays of the country, which is attended by well-known artists, athletes, chefs and actors. Quebec City attracts travelers in early February; Montreal draws attention to curious travelers at the end of the month. In the last week of the month the Festival of Lights is held; the holiday is also sure to please fans with noisy and … Open

Quebec is one of those tourist places that are visited at any time of the year. In the summer period, the weather in the province is warm and sunny. At this time, it attracts fans of hiking tours, active recreation, and beach entertainments. In summer, many interesting holidays and festivals are also held in local cities. You can witness all of them absolutely for free. In autumn, local resorts are visited by … Open

5. Quebec would certainly please those who like to bring many exciting souvenirs and gifts from vacations. Handicraft traditions are widespread, so interesting handicraft shops and souvenir stalls can be found almost in any city. The most popular gifts are things made of wood and ceramics, as well as cotton clothing. 6. In winter, there are frequent heavy snowfalls in Quebec; those who plan to travel by car have … Open

Vacationers would like the picturesque town of Laval. It is famous due to the Armand-Frappier museum with its exposition devoted to microorganisms. There is also the space study center, Cosmodome, which is open to the public and offers its guests a very interesting and informative program. The permanent symbol of the charming town of Gatineau is the Canadian Museum of History; for many years, it has remained the … Open