Sightseeing in Winnipeg - what to see. Complete travel guide 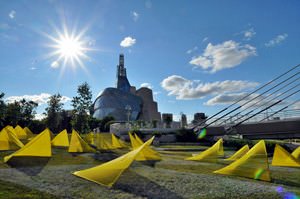 A small town Winnipeg, located nearby a lake with the same name, needed a hundred of years to turn from a modest settlement into a modern megalopolis and a center of industry and tourism of Canada. This city has become very popular among immigrants due to cheap prices for apartments, so while walking on the streets of Winnipeg you can hear English, French, Ukrainian and Russian languages. Such cultural diversity couldn’t have failed to make an impact on the traditions of the city and so today there are many cultural centers in Winnipeg.
Extraordinary weekend in Winnipeg - unusual places, services and attractions for travel gourmet
…

Open
The main city’s sight is Royal Canadian Mint that makes coins for Canada and some other countries even nowadays. Entering this building is prohibited, but you will be amazed even by the look of this house as its architecture is really unusual.
Assiniboine Park is the most popular place for people who enjoy walking. The park is also a great place to explore the beauty of the Canadian nature. If you visit Winnipeg with kids, don’t forget to attend Kildonan Park that is located in this city. Architecture fans should consider visiting Exchange Quarter, where you will find beautiful buildings of the Victorian period. As this city is a home for people of different nationalities, you will find Italian, French quarters, and China town. In each of the quarters you can find chains of shops and restaurants made in best traditions of some culture. Copyright www.orangesmile.com
Winnipeg design-hotels for stylish travellers
In the business district of the city is situated a very beautiful historic building. This building is home to The Marlborough Hotel, whose interior is full of harmony and aristocratic …

Open
Most intraconscious visitors can’t fail to notice the resemblance of the city’s name and the main character of the popular children’s book about Winnie-the-Pooh. Indeed, the name Winnipeg is connected with the legend about a bear cub, which has made a trip from Canada to the Great Britain. 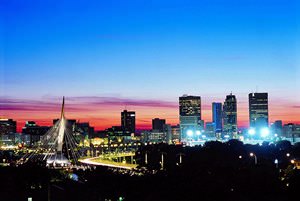 Among the cultural centers of the city is the Ed Leith Cretaceous. It presents visitors with a collection of archaeological finds related to the Cretaceous period. In this museum, visitors can see the skeletons of dinosaurs and huge fish, as well as a collection of unique fossils, which are more than 100 million years old. This museum has many information panels, so even an independent tour of it promises to be very exciting.
Top places to stay in Winnipeg - most luxurious hotels
Some hotels in Winnipeg are very popular among wealthy travelers. One of such is reputable The Fairmont Winnipeg. It occupies a very astonishing and large-scale modern building which makes …

Open
No less interesting is the Robert B. Ferguson Museum of Mineralogy. It occupies a beautiful modern building with panoramic windows. The museum is located on the territory of the Wallace University. The formation of the unique collection of minerals that visitors of the museum can see today began back in 1918. The famous geologist Joseph Spencer presented the university with his collection of minerals, which numbered more than 1,000 exhibits. The example of the well-known geologist was followed by other scientists. Geologists from all over Canada began to send samples of rocks and minerals to the university. Over time, the collection has become so huge that a whole building has been allocated for its storage. Guest of Winnipeg can visit this amazing museum for free. 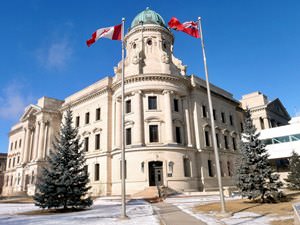 While walking around the city you can see a lot of interesting sculptures. One of the most effective and recognizable is the sculpture Golden Boy. This sculpture is remarkable, first of all, by an unusual arrangement; it is mounted on the top of the dome of the building of the legislative assembly. The height of this statue is more than 5 meters, and it is located at an altitude of 77 meters, so you can see the figure of the golden boy from many areas of Winnipeg. The sculpture which was installed in 1919, symbolizes the god of Mercury - the patron of commercial affairs.
Old hotels keeping the history of Winnipeg
Winnipeg is set to offer travelers several charming hotels with historical scenery. One of the most attractive establishments from this point of view is The Fort Garry Hotel. The hotel …

Open
The city has very interesting religious sites. St. Mary's Cathedral is an excellent example. It was built in 1880 and is a striking monument in the Romanesque style. The facade of the cathedral which is more than a hundred years old has been preserved almost in its original form. The main feature of the internal design of the ancient cathedral which was preserved is considered to be stained glass. Recently, a modern electronic organ was installed in the cathedral which everyone can listen to. Many come to the cathedral specifically to admire the ancient icons with the finish of gilding.

This guide to iconic landmarks and sights of Winnipeg is protected by the copyright law. You can re-publish this content with mandatory attribution: direct and active hyperlink to www.orangesmile.com.
Winnipeg - guide chapters 1 2 3 4 5 6 7 8 9 10 11 12 13

Sights around Winnipeg from our guide 'Extreme places on Earth' 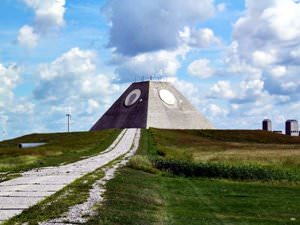 Distance from Winnipeg center - 169.5 km.
The base was built during the Cold War and had been intended to intercept Soviet missiles. The Nekoma Base became the first missile defense system in the US. The object was finished in 1975. However, the complex was abolished just a few years after commissioning. For more than 40 years the military construction has been disregarded. Travellers and tourists notice it only due to the original exterior design. The military base has not been guarded for a long time, so everyone can explore its territory. The Nekoma Military Base is especially popular with those travellers who want to take impressive photos in unusual places. … Read further

Search touristic sites on the map of Winnipeg

Sightseeing in regions nearby Winnipeg

Minneapolis
Another unusual solution of architects is a system of aerial crossings, which connects major business centers of the city. The reason for this is in the climate of this area, which is characterized by very harsh winters. This solution has been suggested to help people to move freely from one building to another in bad weather without going out. The decision has been right and ... Open »
Ontario Province
One of the most popular excursions among tourists is a trip to the Falls Avenue Entertainment Complex located a few steps from the most famous natural attraction of Ontario, Niagara Falls. Fallsview Indoor Waterpark occupies the vast part of the complex; the former offers the most unusual attractions, great pools and slides, as well as several cafes. Sports fans are ... Open »
Milwaukee
This place with rich history is one of the largest U.S. cities. Milwaukee literally translates as "good earth". This name was given to the city by its first settlers from Indian tribes. In the end of the 19th century the main manufacturing in the city was brewing. Brewing began developing under the influence of German immigrants who invaded the town in the middle of the ... Open »
Chicago
Perhaps, when someone mentions Chicago, we immediately think of the mafia. None of us will probably call Chicago one of cultural capitals of the States. However, the city has everything that a great cultural center should have. At least, its museums are surely worth attention of people who wish to relax. The museum campus, which includes Shedd Aquarium, Adler Planetarium, and ... Open »
Edmonton
Historically Edmonton has served as a so called "gateway" to the wealth of the North. The city has reached particular popularity during the Klondike gold rush. Through the city has laid the way to the north-west of the country, to Yukon and Alaska. Today, the economic potential and cultural significance of Edmonton competes with many cities of the country. The unusual ... Open »
Calgary
First mentions of Calgary appeared in 1875. Nowadays this is a modern resort, the largest megalopolis of the country and the cultural capital of Canada. The city attracts people who enjoy active rest as on its territory are located numerous sports facilities. Multiple shops, restaurants and museums, shadowy valleys and parks – all these factors are truly good for comfortable ... Open »

All about Winnipeg, Canada - sightseeings, attractions, touristic spots, architecture, history, culture and cuisine. Prepare your trip together with OrangeSmile.com - find out the 'must see' things in Winnipeg, which places to visit, which excursions to take, where the breathtaking views are waiting for you. Planning your trip with this travel guide will help your to get the most out of Winnipeg in few days.