Sightseeing in Edmonton - what to see. Complete travel guide 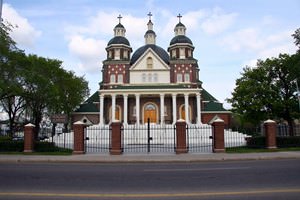 Historically Edmonton has served as a so called "gateway" to the wealth of the North. The city has reached particular popularity during the Klondike gold rush. Through the city has laid the way to the north-west of the country, to Yukon and Alaska. Today, the economic potential and cultural significance of Edmonton competes with many cities of the country.
Cultural vacation in Edmonton - fantastic architecture and monuments
Legislature Building, Muttart Conservatory, Commonwealth Stadium, Hotel Macdonald, Coast Edmonton House, Rexall Place, as well as many others, they all become the world's cultural heritage objects and remain as iconic monuments for Edmonton …

Open
The unusual atmosphere of Edmonton will be of particular interest to tourists. The inevitable noise of the business center is wonderfully mixed with calm and cozy atmosphere of the northern part of the city. This place has a huge industrial potential, but at the same time it is focused on the preservation of family values, that are especially important on the north. Large number of green parks along the river, on which the city stands, only contributes to this. The townspeople apply many efforts to make sure the North Saskatchewan River remains clean.
The cultural and ethnic diversity of the city has become the main spiritual wealth of this place. It is carefully and successfully preserved until our days. That unique lifestyle of the city, the opportunity to get acquainted with ethnic origins of Canada's culture, unique beauty, and close proximity to the Rocky Mountains attract many tourists to this wonderful city. Copyright www.orangesmile.com
Cuisine of Edmonton for gourmet with top restaurants and cafe
There are more than thousands of restaurants and cafes in the city; it won’t be easy to choose the best among them even for experienced travelers. However, some attractive restaurants …

Open
In the city, there are several amazing museums. One of the most interesting museums is the Zoological one. It resembles a research center with its design. In the museum, educational lectures for pupils and students are held. There is also a big library. The great collection of the museum is divided in accordance with themed categories. 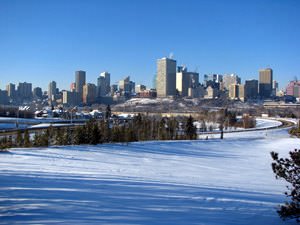 It is also interesting to visit the Alberta Railway Museum opened in 1976. The museum is located at the old railway station. Its collection includes over 70 pieces of railway equipment. Since its opening, this unique museum has been one of the largest in Canada.
Authentic traditions, festivals and lifestyle of Edmonton inhabitants
Edmonton is home to a huge number of interesting festivals and national holidays; the cultural calendar of the city is simply amazing because of an abundance of cultural activities. There …

Open
In the beautiful modern building, there is the Royal Alberta Museum. It was founded in 1967 and is one of the largest cultural centers in North America. The visitors of the museum can see here the pieces of art of different epochs. Educational lectures and music concerts are often held here. The museum has been occupying the building it does now since 2015. 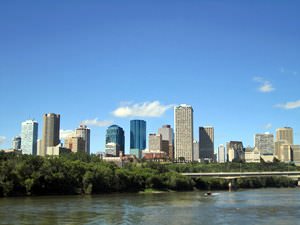 Admirers of historical attractions will be definitely impressed by the Alberta Legislature Building. Since its construction, it has been used for hold meetings of the Legislative Assembly. This luxurious building was built in 1913. Its exterior combines the inimitable elements in Egyptian, Greek and Roman styles. Every day, exciting excursions, during which you can sink into an atmosphere of its halls, are given in the historical building. It is located on the hilltop and has a spectacular panoramic view of the city.
Excursion over cultural sights of Edmonton - 'must visit' points of interest
Once being the largest trade center, Edmonton is known as the center of culture and the hub of many attractions. Its main symbol is the Royal Alberta Museum taking visitors since 1967 and …

Open
The Hermitage Park is very popular with nature admirers. It is the biggest park in the city. It is very interesting to visit it at any time of the year but you can take part in more entertainments only in summer. In the park, there is a beautiful pond that is very popular with fans of fishing. There are also well-equipped playgrounds and special picnic sites. In a warm period, special camping sites are equipped in the park. There are also different sports and tourist equipment rental centers. Not so long ago, a hotel was opened here. Now, everyone can spend here several days at any time of the year.

This guide to iconic landmarks and sights of Edmonton is protected by the copyright law. You can re-publish this content with mandatory attribution: direct and active hyperlink to www.orangesmile.com.
Edmonton - guide chapters 1 2 3 4 5 6 7 8

Shopping streets in Edmonton
♥   Shopping area ' Whyte Avenue' Edmonton, 4.1 km from the center. On the map

Sights around Edmonton from our guide 'Extreme places on Earth' 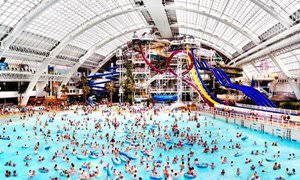 Distance from Edmonton center - 9 km.
World Water Park is so huge that, at the same time, it can welcome up to 40 000 people. Besides numerous rides, the entertainment center has a very amazing aquarium and an artificial lake. Since the aquapark is set indoors, you can comfortably relax there at any time of the year. There are 13 slides of different class. The height of the two fastest is 24 and 25 meters. World Water Park is a true modern entertainment center with an excellent hotel, relaxation areas, a variety of rides, shops, and restaurants. … Read further

Search touristic sites on the map of Edmonton

Sightseeing in regions nearby Edmonton

Calgary
First mentions of Calgary appeared in 1875. Nowadays this is a modern resort, the largest megalopolis of the country and the cultural capital of Canada. The city attracts people who enjoy active rest as on its territory are located numerous sports facilities. Multiple shops, restaurants and museums, shadowy valleys and parks – all these factors are truly good for comfortable ... Open »
Banff
Banff is a town in the province of Alberta approximately 110 km from Calgary. The town is located within the Banff National Park. This is a popular resort destination for Canadians and guests of the country. Banff National Park is the oldest national park in Canada. The Rocky Mountains surround the beautiful area, creating mesmerizing views. When looking at this enchanting ... Open »
Vancouver
The old part of the city is represented by Gastown. The buildings in this region were created by first settlers. During your walks on paved roadways you will see ancient houses made of burnt brick – the most durable and popular material of those days. The hanging bridge is surely no less interesting and attractive as this is a unique architectural solution. Not far away from ... Open »
Seattle
Seems, everyone has heard at least once about “the city of rains” located in the United States. This city is Seattle, which is situated on the north-west of the continent. However, the city is named so not because of the fact that the level of precipitations is the highest here. The reason for this is in the number of cloudy days per year, which is the highest comparing to ... Open »
Portland
The Chinook people were the indigenous inhabitants of the region. This tribe was actively fishing and then selling their catch on the riverbank. Women were mostly picking berries and searching for different tuberous vegetables. In 1843, William Overton saw potential in this area and decided to establish a commercial settlement here. However, Overton lacked money, and so he ... Open »
Winnipeg
The main city’s sight is Royal Canadian Mint that makes coins for Canada and some other countries even nowadays. Entering this building is prohibited, but you will be amazed even by the look of this house as its architecture is really unusual. Assiniboine Park is the most popular place for people who enjoy walking. The park is also a great place to explore the beauty of ... Open »

All about Edmonton, Canada - sightseeings, attractions, touristic spots, architecture, history, culture and cuisine. Prepare your trip together with OrangeSmile.com - find out the 'must see' things in Edmonton, which places to visit, which excursions to take, where the breathtaking views are waiting for you. Planning your trip with this travel guide will help your to get the most out of Edmonton in few days.