Sightseeing in Ottawa - what to see. Complete travel guide 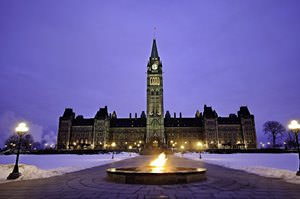 This is a surprisingly quiet and beautiful city despite the fact that such peaceful atmosphere is not typical for large metropolitan regions. Here you will find many spacious forests, city streets are decorated with colorful flower beds, and you can see small cottages of various styles and forms simply everywhere. The city's name can be translated as "exchange". The reason for this is in the fact that several centuries ago Ottawa was one of the largest shopping areas that attracted traders from all neighboring countries.
Advices to travellers: what you should know while being in Ottawa
1. The optimum way to pay for goods and services in Ottawa is national currency as any other currency including US dollars is not accepted in the city. It should be noted that currency can …

Open
Several important places of interest are located around the central square. Here also stands the tower of the World, which height reaches 96 meters; the square is also the location of government buildings. They are made in the Gothic style which is unusual for modern architecture, so these houses more like beautiful medieval buildings rather than modern buildings. Every morning at 10 o'clock on the area is changing of the guard, which involves officers of the Royal Mounted Police.
There are several institutions that are certainly worth visiting by lovers of art. Classical music fans will enjoy the performances of Canadian orchestra, which are organized in the National Arts Centre. Here are also conducted the performances of the Royal Ballet of Ottawa. The most popular exhibition centers are Congress Centre, Ottawa Civic Centre, and Nepean Sportsplex. Here are conducted numerous exhibitions devoted to painting, literature, history and archeology. In this city you will find many places for walking. Beautiful parks and lanes can be seen right on every step in Ottawa. In summer this is an ideal place for picnics, cycling, and winter is the time for skiing. If you travel to Ottawa in spring, you can participate in one of the favorite holidays of the local people – Tulip Festival. Copyright www.orangesmile.com
Extraordinary weekend in Ottawa - unusual places, services and attractions for travel gourmet
…

Open
One of the most beautiful local architectural monuments is the Canada's Parliament Building. It is a chic Neo-Gothic-style structure that looks like a luxurious castle. The large-scale building was erected at the beginning of the 20th century. Beautiful gray granite was used for its construction. Near the spectacular building, you can see numerous monuments dedicated to prominent figures of politics and culture. 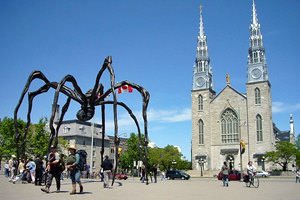 No less attractive Gothic monument is the Notre-Dame Cathedral Basilica built in the middle of the 19th century on the site of a dilapidated wooden church. Today this cathedral is the oldest in the city, a few years ago it was recognized as a historic monument of national importance. The main feature of the building is two high spiers subsequently attached to the building in the late 19th century.
Shopping in Ottawa - main shopping streets, outlets and boutiques
Ottawa is replete with modern shopping centers, boutiques, markets, gift shops, and art workshops. The bulk of tourist-oriented stores are in the historic district where it's worth taking a …

Open
An interesting cultural site is the Canadian War Museum, the exposition of which began to form in 1880. Originally it consisted of a small collection of military artifacts; the official opening of the museum took place back in 1942. By that time the museum's collection was quite significant, therefore it was placed in the old state archive building. In 2005, the museum was moved to a new beautiful building, and now it presents very interesting exhibitions devoted to world wars of the 20th century. 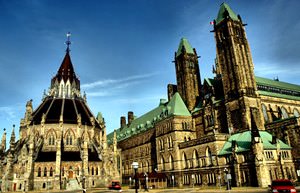 In the immediate vicinity of Ottawa is the Canadian Museum of Civilization occupying a futuristic modern building of asymmetric shape. The extensive exposition of this museum is dedicated to the indigenous peoples of Canada. Here you can see unique archaeological finds, as well as artifacts belonging to the pre-colonial period. The museum's collection is constantly growing, so today it has many exhibits of the New Time.
Family holidays with kids in Ottawa. How to entertain your child, things to show to children.
Ottawa offers many interesting attractions and entertainment to please traveling families with children. Splash Wave Pool is popular among lovers of water activities. It is an indoor water …

Open
A kind of symbol of the city is the beautiful Fairmont Château Laurier. This French-style castle was built in 1912. One of the most famous and popular hotels in Ottawa has been operated here for more than a hundred years. The interior decoration of the hotel is also striking in its splendor: many original design elements are fully preserved. In the lobby of the hotel, you can see luxurious Tiffany stained-glass windows, as well as elements of figured stucco molding. The walls of the hotel keep a rich collection of antique furniture, works of art and other decorations.

This guide to iconic landmarks and sights of Ottawa is protected by the copyright law. You can re-publish this content with mandatory attribution: direct and active hyperlink to www.orangesmile.com.
Ottawa - guide chapters 1 2 3 4 5 6 7 8 9

Shopping streets in Ottawa
♥   Shopping area ' Elgin Street' Ottawa, 0.8 km from the center. On the map

Survived castles around Ottawa
♥   Castle 'Confederation Building' , 0.6 km from the center. On the map

♥   Castle 'Manoir Louis-Joseph-Papineau' , 64 km from the center. On the map

Art galleries in Ottawa and around
♥   Art museum 'National Gallery of Canada' Ottawa, Ontario, 1.4 km from the center. On the map

Sights around Ottawa from our guide 'Extreme places on Earth' 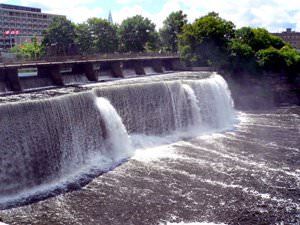 Distance from Ottawa center - 2.8 km.
Regardless of the popular tradition, many travellers prefer to visit Rideau Falls not at the height of summer but in winter. The fact is that the water flow is relatively small, so in winter the falls always freeze forming incredibly beautiful ice sculptures. This amazing natural sight looks even more impressive and interesting against the background of large-scale constructions including the Canada Pavilion and the building of the Old City Hall. … Read further

Search touristic sites on the map of Ottawa

Sightseeing in regions nearby Ottawa

Montreal
The observation of urban neighborhoods from a special area located on the Mont Royal Mountain will definitely become one of the most exciting adventures. Another observation point is located on the roof of one of the city's skyscrapers, as well as in the tower of the Notre-Dame-de-Bonsekur Church. The church is notable not only for its superb architecture, but also for an ... Open »
Toronto
Yonge Star is the main street of the city. Here you will find a huge number of restaurants and shops. We should also mention that the street has practically no traffic, so Yonge Star has become a favorite place for walking among both citizens and tourists. Not far away from the center of the city is located the biggest Exhibition Center of the country - Ontario Science Centre. ... Open »
Niagara Falls
The majority of excursions are associated with falls. Here you can visit exhibitions of photographs devoted to falls, attend entertaining lectures and performances for children. Approximately 500 kilometers of the falls are located on the "American" side of the city, but the biggest part of the falls are on the "Canadian" side. It’s hard to see the greatness of the falls ... Open »
Quebec City
Old Town is a historical part of the city. Here are located all main sights of Quebec, as well as most beautiful parks. Make a walk down the stairs or use a funicular, and you will enter Lower Quebec. The center of this place is the Royal Square. Here you will find several modern restaurants, cafes and galleries, as well as one of the most important sights of the religious ... Open »
Buffalo
Allentown district is famous by its exhibition centers, wide selection of night clubs and bars, and antique shops that offer large choice of souvenirs. Northern Buffalo district is widely known by its shops. The number of them is so high that even a devoted shopping fan won’t be able to visit them all. Here you can find either small groceries or modern trading centers. As ... Open »
Portsmouth
As Portsmouth is rather small, one can easily get around on foot and see all major attractions of this place. One of the attractive spots is the home of Warner built in 1716. It's a beautiful building made of red brick, which is decorated with fine wall paintings. The residence of John Longdon is located nearby. This building was founded in 1785. This house is famous by one ... Open »

All about Ottawa, Canada - sightseeings, attractions, touristic spots, architecture, history, culture and cuisine. Prepare your trip together with OrangeSmile.com - find out the 'must see' things in Ottawa, which places to visit, which excursions to take, where the breathtaking views are waiting for you. Planning your trip with this travel guide will help your to get the most out of Ottawa in few days.