Detailed hi-res maps of Bangor for download or print 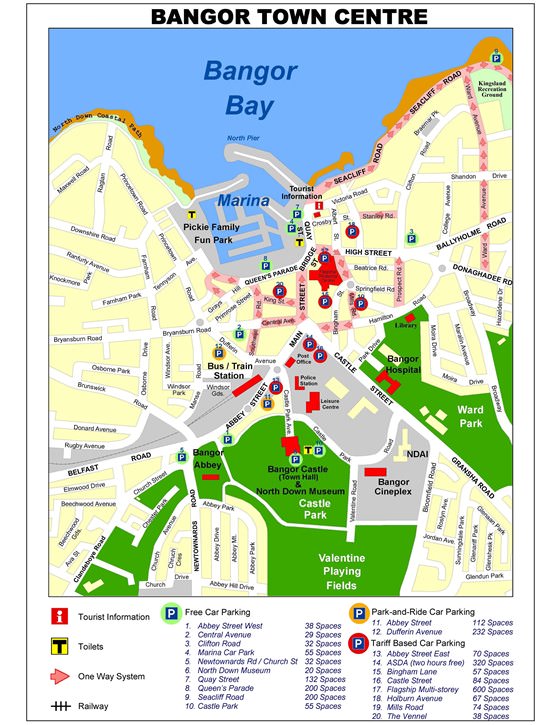 The actual dimensions of the Bangor map are 2500 X 3236 pixels, file size (in bytes) - 1162349. You can open this downloadable and printable map of Bangor by clicking on the map itself or via this link: Open the map. 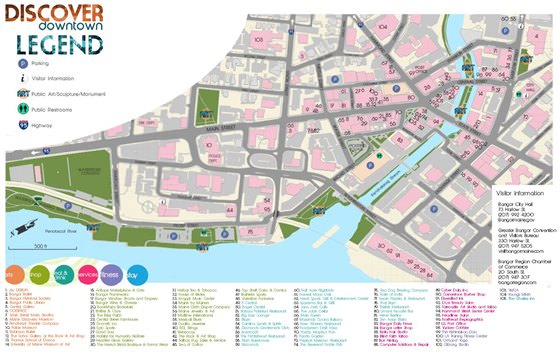 The most popular type of public transport are buses. In Ireland, buses do not only run intra urban routes. There are also long-distance runs that connect the most remote regions. Transport as has been earlier mentioned goes in strict accordance with the schedule. The buses, usually two-storey and greenish in color are in excellent working condition and running around the city. Railway connections on the other hand have also been developed at the highest level. All major cities are connected with the most remote settlements by railroad tracks. Virtually all trains running through Ireland are speedy and their technical condition is at a high level. The cost of train tickets depends on the class of the wagon, the direction of travel and the distance. Please note that for several years now, the Government of Ireland has been planning to begin construction of a subway. Initially, it was in the plan to build only two branches of underground transport which will connect the Northern part of Dublin with the Western part. … Open

It is worth mentioning that in recent years, foreign businessmen have invested heavily in Ireland. And the country itself makes some investments across its own borders. The growth of the country’s GDP according to the data of the previous year was about five percent. GDP in numerical form is about 340 billion dollars. GDP on purchasing power for 2014 was about 190 billion dollars. The per capita GDP is 46,000 dollars per year. The unemployment rate for a few years has been at a stable rate of 12%. Less than four percent of the population lives below the poverty line. Public debt as of 2014 was 60% of GDP. Based on these indicators, Ireland is ranked 23rd in the world. It is worth noting that Ireland is one of the first countries that managed to stop the progressive inflation after the global crisis of 2008. However, the growth rate of salaries has not yet reached that of the cost of goods and services. … Open

Search for services, infrastructure and sights on map of Bangor

Our guide chapters over Bangor

Bangor for children - what to visit

With younger children, you can visit Snakes and Ladders, which is aimed specifically at the smallest kids. Among other things, it has playgrounds with safe inflatable attractions, trampolines, and ball pits. Older children will love all kinds of obstacle courses and sports attractions, as multi-level playgrounds. The center also offers children’s mini-karting and a nice cafe, which would be a great place to … Open

A market opens on the central city square every week, and this is a great place to visit in search of unusual souvenirs. At the market, you will find several handicraft stalls where they sell beautiful dream catchers, home decorations, fashion jewelry, and children's toys. You can also pick some affordable clothes - pay special attention to colorful T-shirts in youth style. For nice but inexpensive souvenirs, … Open

A typical youth spot is The Goat's Toe, which was opened in a beautiful historic building. Inside, it was possible to preserve the historic finishes as much as possible. The club will certainly appeal to fans of good wine and cocktails. It often holds interesting evening programs and has become a permanent venue for live music performances. One of the trendiest and most stylish nightclubs in Bangor is Betty … Open

Among the ancient buildings that have survived in the city, there are also quite unusual ones. A vivid example is the McKee Clock Tower. It was built in 1886 and is located in the very center of the city. Its appearance has remained pretty much the same after more than a hundred years. The clock tower is one of the most popular meeting points among the townspeople. When it comes to Bangor’s historic … Open

Maps of Quebec City
In early May, Quebec City is shrouded in a magical atmosphere - the thing is that the famous event called Festival de Magie de Québec takes place at this time. Cultural institutions of the city and parks (Theater Petit Champlain, Le Parc des Champs-de-Bataille) hold free events for the whole family with the participation famous illusionists from around the world. By the way, ... Open »
Maps of Boston
One of the favourite celebrations among local people is the Boston's First Night. It happens on the eve of every new year and starts on the December 31. During the Boston's First Night you have approximately hundred of ideas how to spend this day with fun: dancing, visiting cinema and theatre, shopping and enjoying numerous sales. A number of people, including residents and ... Open »
Maps of Massachusetts
Every year, Boston Early Music Festival is held. It is an event that will impress every audiophile without exception. The festival is attended by world-famous musical groups that perform music in the Baroque and Renaissance styles, as well as classical and medieval music that has long lost much popularity. Concerts are held one by one from early morning until late at night; ... Open »
Maps of Montreal
Another significant fest for Montreal and Canada, in general, is Osheaga Music and Arts Festival held in early August. It is dedicated to rock music in all its diversity, from indie to punk. Music concerts, Indian craft fairs, and art exhibitions are held on small Saint Helena where the comfortable Jean-Drapeau Park is located. The fest received its name due to the ... Open »
Maps of Ottawa
They also love theater in the capital of Canada, and such an event as the Magnetic North Theater Festival is another confirmation of this. Its dates usually fall in mid-June when the audience will be entertained by artists coming from all over the world throughout one week. The program includes theatrical and dance performances, avant-garde metamorphoses - whatever floats ... Open »
Maps of New York
New York hosts one of the most important fashion festivals twice a year. The first show can be seen on February, and then in September. New York Fashion Week covers the latest trends of the spring-summer and autumn-winter seasons in February and September. The program of each forum includes a fashion show with the participation of about 250 designers. To attend the New York ... Open »
Maps of Manhattan
In addition to the Chinese, Manhattan is home to a large number of immigrants from European and Asian countries, such a variety of Nations causes a friendly attitude of local residents to foreign tourists. Many travellers who visit Manhattan for the first time, note that they have a strange feeling of presence in their native places while walking around the area. Some ... Open »
OrangeSmile.com - online travel reservation expert providing reliable car rental and hotel booking services. We feature more than 25.000 destinations with 12.000 rental offices and 200.000 hotels worldwide.
Secure Server