Sightseeing in Montreal - what to see. Complete travel guide 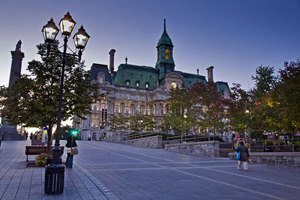 First settlements on the territory of Montreal appeared in 1535. Today Montreal is a modern metropolis, and thousands of tourists come to get acquainted with its attractions.

The observation of urban neighborhoods from a special area located on the Mont Royal Mountain will definitely become one of the most exciting adventures. Another observation point is located on the roof of one of the city's skyscrapers, as well as in the tower of the Notre-Dame-de-Bonsekur Church. The church is notable not only for its superb architecture, but also for an observatory opened in it. So here you can not only explore the neighborhood of Montreal, but also watch the starry sky.
Advices to travellers: what you should know while being in Montreal
1. Tourists arriving at the airport of Montreal should first find a stall of Guide D'aeroport Montreal-Trudeau on the first level. The stall provides several guiding leaflets for free. The …

Open
Near the church is located the main square, where you will find a monument dedicated to the city's founder - Paul de Chomedey, sieur de Maisonneuve. Here you can see the monuments built in honor of Queen Victoria. Mille Carre Dore Quarter is one of the most remarkable places of this city as there you will find magnificent palaces built in the Renaissance style, Baroque monuments, and buildings featuring Art Nouveau style. Probably, the most notable building of the quarter is Meredith Palace.
In the heart of the city you can see the Windsor station, which was built in the late 19th century. At first glance the building looks like a modern complex and it is difficult to believe that the construction of the station was completed over a hundred years ago. Not far from the train station is located the most important religious object - the church of Saint-Georges, a magnificent example of neo-gothic style architecture. The halls of the church are decorated with stained glass, tapestries and fine wood sculptures. The most beautiful mansions can be seen on the Saint-Joseph Boulevard. Tourists are free to visit the expositions of the largest museums of Montreal - History, Local History, the Museum of Indian Arts and Museum of Paleontology. Copyright www.orangesmile.com
Extraordinary weekend in Montreal - unusual places, services and attractions for travel gourmet
…

Open
Notre-Dame Basilica located in the very heart of Old Montreal is a grand architectural monument. The basilica building with its bell tower reaching 70 meters in height is a vivid example of the Neo-Gothic style. The magnificent cathedral was built in 1872, whereas its foundation was laid 200 years earlier. After the construction was completed, it became the largest religious structure in North America. Today the basilica is not only attractive for its unique architecture, but also for its luxurious interior decoration retaining sophisticated stained-glass windows and many precious elements. 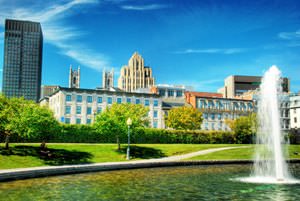 Connoisseurs of art should certainly head to Place des Arts in Montreal. This is the name of the modern performing arts center opened in 1963. Today it accommodates a theater where interesting productions take place several times a week. There is also a concert hall and several galleries hosting various exhibitions.
Shopping in Montreal - main shopping streets, outlets and boutiques
The main shopping street in Montreal is Sainte-Catherine that is often called the street of a hundred shops. It is a row of fashion boutiques, brand clothing, shoe, jewelry, and gift shops. …

Open
A special cultural object is the Montreal Biodome that occupies one of the most original buildings in the city. The facility was constructed as a velodrome for the 1976 Olympic Games. Today the large-scale building houses an ecological park with five thematic ecosystems and even a small zoo. Visitors to the center have the opportunity to learn a lot of new and interesting facts about the world surrounding us. 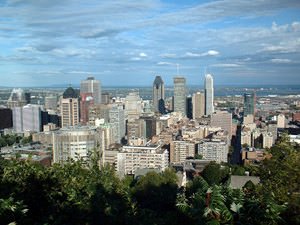 Among the outstanding historical sites is the Old Town Hall. The first Town Hall building was almost completely destroyed by fire in 1922. Thanks to the availability of old drawings and layouts it was possible to fully recreate its original appearance. Like many years ago, the town hall's main decoration is considered its tall narrow windows, as well as a facade decorated with elegant columns. In 1984, the historical building was recognized as a monument of national importance.
Top touristic routes around Montreal: architectural sightseeing and landmarks
Discovering the architecture of Montreal from bird's eye view! Cathedral of Marie-Reine-du-Monde, Olympic Stadium, Bonsecours Market, Montreal City Hall, Christ Church Cathedral, Casino de Montreal, all those monuments are defining the image of Montreal …

Open
The city can also offer very unusual modern architectural monuments. The complex called "Habitat 67" is known all over the world. It was built for the 1967 International and Universal Exposition, which was held in Montreal. Today the building of a bizarre shape is an apartment building. All the apartment owners have their own private gardens on the roof.

This guide to iconic landmarks and sights of Montreal is protected by the copyright law. You can re-publish this content with mandatory attribution: direct and active hyperlink to www.orangesmile.com.
Montreal - guide chapters 1 2 3 4 5 6 7 8 9 10 11

♥   Shopping area ' Saint Denis Street' Montreal, 2.8 km from the center. On the map

♥   Shopping area ' Golden Square Mile' Montreal, 3.3 km from the center. On the map

♥   Shopping area ' Saint Catherine Street' Montreal, 3.6 km from the center. On the map

♥   Shopping area ' Mount Royal Avenue' Montreal, 4.9 km from the center. On the map

National and city parks around Montreal
♥   Local Park 'Mount Royal' , 2.2 km from the center. On the map

Sights around Montreal from our guide 'Extreme places on Earth' 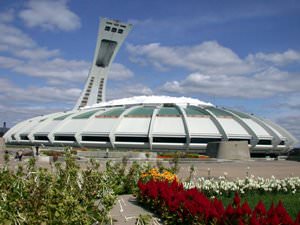 Distance from Montreal center - 7.1 km.
The visitors' record was staged in 2012 on the day of the game with the participation of Los Angeles Galaxy. At that time 60 860 people visited the Olympiastadion. The Olympiastadion is located in the incredibly beautiful area and is surrounded by the extensive park zone. Many followers of the unusual excursions strive to 'see the huge turtle' from the bird's perspective. Vond er Höhe looks just fantastic. … Read further

Search touristic sites on the map of Montreal

Sightseeing in regions nearby Montreal

Ottawa
Several important places of interest are located around the central square. Here also stands the tower of the World, which height reaches 96 meters; the square is also the location of government buildings. They are made in the Gothic style which is unusual for modern architecture, so these houses more like beautiful medieval buildings rather than modern buildings. Every ... Open »
Quebec City
Winter carnivals remain one more fascinating event that traditionally attracts travellers to Quebec. First winter carnival took place in 1894. Since that time each February Quebec has been diving into the atmosphere of fun and entertainment. Here are organized snow figures contests, carnivals and parades, various sports competitions and music performances. When it comes to ... Open »
Portsmouth
The most beautiful parks and alleys can be found on the banks of the Piskataqua River. Here are also located excellent restaurants opened in the buildings of past centuries. Besides the fact that you will be served delicious food, the decor of restaurants is simply delightful. Everything is chosen with great taste and all details emphasize the welcoming atmosphere of this ... Open »
Bangor
If you happen to visit Bangor during the last summer month, you can attend a local charity festival. The event is called the “Open House Festival”. This is a month-long festival packed with interesting activities and events. All funds raised during Open House are then donated to charity. Almost all squares of the town participate in the festival. They become the scenes ... Open »
Massachusetts
Literally, the name of Massachusetts can be translated as ‘the large hill’ that fully reflects the inherent distinctiveness of the local landscape. There are 50 major cities and over 300 towns in the state, each of which can attract travelers with unique landmarks. The capital is Boston. The city is one of the largest metropolises in the world. There is literally ... Open »
Cambridge
The town was founded in 1630. At that time it was named New Town. Six years later was founded Harvard University, and two years later it was decided to rename this city in the name of the famous UK scientific center Cambridge. The story of this town is rich and diversified. In 17-18 centuries this place had the status of the cultural capital. Here was formed American army, the ... Open »

All about Montreal, Canada - sightseeings, attractions, touristic spots, architecture, history, culture and cuisine. Prepare your trip together with OrangeSmile.com - find out the 'must see' things in Montreal, which places to visit, which excursions to take, where the breathtaking views are waiting for you. Planning your trip with this travel guide will help your to get the most out of Montreal in few days.