Detailed hi-res maps of Ottawa for download or print 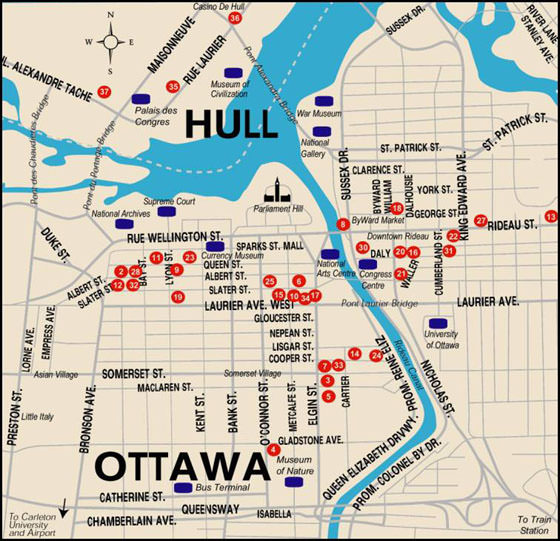 The transport system in Canada is very developed. The main types of land transportation are rail and road transport. By the length of her railway tracks, Canada is ranked among the leaders in the world. The length is measured at 85 thousand kilometers. But, despite this, vehicles take up most of the passenger traffic. The country is covered with many intercity bus routes. There are also bus flights to the neighboring country, the United States of America. When buying a bus pass for a certain period of time, there is a flexible charging system. The most developed road network can be found in the northern regions. Almost all tourist sites can be reached by bus. However, buses often do not go to National Parks, so you will have to rent a car or use a taxi. Renting a car is only possible if you are aged 23 and above. You will also need to provide a credit card. Renting of a car involves payment of insurance and local fees. Taxi tariffs are quite impressive. All taxis are registered and pooled in the system; payment in a taxi is strictly regulated. … Open

External economic relations have also received significant development since the beginning of the two thousandth. Today, Canada is considered one of the most leading trading nations. In terms of foreign trade turnover, it ranks seventh. Her main economic and trade partner is the United States of America. Annually, there is an exchange of goods and services for the sum of over one and a half billion Canadian dollars between the two States. The service sector accounts for about 70% of the total GDP. In retail trade, is employed more than 10% of the total working population of the state. It is worth noting that in Canada, small commercial establishments have not received much development and most retail outlets are housed together in large shopping centers, including underground ones. Also, the most developed sphere of services is education and health care, as well as business services. … Open

Search for services, infrastructure and sights on map of Ottawa

Our guide chapters over Ottawa

This is a surprisingly quiet and beautiful city despite the fact that such peaceful atmosphere is not typical for large metropolitan regions. Here you will find many spacious forests, city streets are decorated with colorful flower beds, and you can see small cottages of various styles and forms simply everywhere. The city's name can be translated as "exchange". The reason for this is in the fact that several … Open

The basilica features unique interior design. Its hall is decorated with ingenious fresco paintings and wood carvings, bright stained glass artworks and plenty of religious artifacts. A significant historical monument is the Peace Tower. The height of the tower is about 300 feet. The monument is commemorating city residents who died in the World War I. The tower houses the Memorial Chamber on the first floor. The … Open

Ottawa presents a good choice of places to rest, recreate and entertain fitting every taste and budget. Eco tourism fans should necessarily visit a local tree nursery named Arboretum. In order to spend a nice day in the open air and enjoy scenic nature sights tourists should not leave the city. A scenic nature nook featuring numerous plants is located right in the heart of Ottawa. The Arboretum tree nursery will be a … Open

The Pelican Grill restaurant specializes in cooking sea foods and delicacies. Among house specialities regular customers give preference to shellfish soup with bacon and to mussels under special sauce. Even though the eating house presents numerous dainty delicacies on the menu, the Pelican Grill restaurant features a rather affordable pricing. Vegetarian diet followers will love the ZenKitchen restaurant offering … Open

Traditions and mentality of Ottawa

Ottawa id a scale modern city featuring unique culture, traditions and customs. Local folks are rather cordial and amicable towards foreign guests. Such an attitude is a result of multinationlaity of the local folks there. The city of Ottawa is home to immigrants from many countries of the globe including Portugal, Italy, China, Germany, Ukraine and others that is why foreign tourists will feel rather cozy and … Open

No less attractive Gothic monument is the Notre-Dame Cathedral Basilica built in the middle of the 19th century on the site of a dilapidated wooden church. Today this cathedral is the oldest in the city, a few years ago it was recognized as a historic monument of national importance. The main feature of the building is two high spiers subsequently attached to the building in the late 19th century. An … Open