Fishing in Norway is the oldest occupation of the population. For this reason, dishes from fish and seafood form the basis of the Norwegian national cuisine. The traditional food, lutefisk is translated to mean “fish in alkali”. Usually this dish is made from cod. The dried fish is soaked in alkaline solution for three days, and then soaked in water for a couple of days. As a result, the dish appears to “melt in the mouth”. It however has a particularly strong smell. The trademark dish of Norway is considered to be smoked salmon. Also famous are dishes from cod, herring, mackerel, and sardines.
Norway economy - strengths, wealth and problems
Norway’s economy depends on the world economic cycles, but in recent years it has maintained a remarkable stability. To date, this Scandinavian …
Read further
Norwegians prefer lamb or beef for meat dishes. Previously, whale meat was very popular. However, such a delicacy cannot be found in every restaurant today. Various dishes are prepared from mutton. An example of such is “forikol”, which is braised cabbage with lamb. Also popular is “fenalar” (pre-salted sheep’s leg which is then dried and smoked).
The traditional Christmas dish of the Norwegians is the ancient “smalakhove” – a dish from a sheep’s head. Every family in this northern country prepares the dish in its own way. This is done either by baking, salting, frying or drying the meat for the ultimate smalakhove dish. Dishes from potatoes, legumes and various groats are served as garnishing. Porridges with sour cream are also popular in Norway and are included in the menu of most top notch restaurants. Copyright www.orangesmile.com
Unique sights of Norway from our series 'Extreme places on Earth'
These spots really worth the attention of a real traveler-researcher. …
Read further
Norwegians abundantly include milk and dairy products in the daily ration. The consumption of milk in the country is one of the highest in the world. Some favorite meals of Norwegians are slightly salted cottage cheese, sour cream, cheese and Smetana. Gudbrandsdalsost is made from cow and goat milk, whey and sour cream. This product is made in the province of Oppland. Gjetost is cheese made from goat’s milk with the addition of whey. This sweet variety with a taste of caramel is served together with wheat bread or Norwegian cakes. 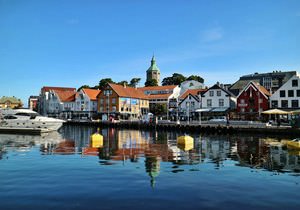 Another aspect of the national cuisine is baking. Severe Scandinavian winters allow the growing of grains only in the southern part of the country. In Norway, thin hard breads are baked according to various recipes. For example, a thin crispy lavash called “knekkebrod” or potato breads – “lefsa” is served with hot dishes. There are also other choices; delicate buns with cinnamon and abundant milk in the dough called “spillingboller”, casserole from apples with sour cream called tesslert bondekpiker, and Norwegian lavish pancakes and muffins with a rich addition of potatoes into the dough. Budget options for desserts include fruit soufflé and bread served with honey. World-famous cookies made from thick dough with the addition of ginger also originated from this northern country.
Norway sightseeing - top places to visit
It's simply impossible to mention all landmarks and places of interest in Norway as absolutely every part of this country is rich in natural and …
Read further
Coffee in Norway is drunk at any time of the day. Also, this northern people love various herbal teas, fruit compotes, kefir and yogurt. The most popular alcoholic drinks of Norwegians are beer, whiskey, gin or liqueurs. 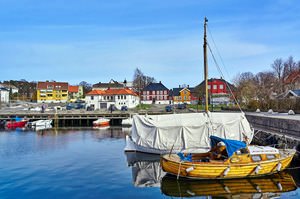 The national drink in Norway is Aquavit, translated as “water of life”. The mixture with strength of 37.5-50% is prepared by distilling the alcohol from potatoes. The resulting liquid is flavored with cumin, coriander, anise, fennel and cinnamon. Before packaging, aquavit is transported twice through the equator in oak barrels. This procedure softens the taste of the strong drink and gives it a rich flavor. The result is linie-aquavit, a soft and fragrant drink with an amber hue. For strong drinks in Norway, “glogg” is most famous. It is made from red wine with the addition of cinnamon, cardamom, cloves and orange peels.

Cuisine and restaurants in popular cities of Norway

Oslo
Sult restaurant is one of the most prominent places dedicated to the national cuisine. Among the specialties of this place are such dishes as grilled salmon, which is usually served with potato salad, and grilled chicken breast with herbs and mushrooms. The location of the restaurant titled Det Gamle Raadhus is a beautiful historic building. This is one of the best restaurants in Oslo. During warm months of a year the restaurant’s tables are located on the terrace, so during the meal visitors … Read more

Trondheim
Another popular place is the Barkgarden Bar & Spiseri tapas restaurant. Regular customers highly recommend tasting pizza there. Hot broth with meat balls, house special lamb dishes, spicy chicken wings, tiger prawns and squids are only a part of Bakgarden Bar & Spiseri menu. Tourists looking for a low-cost dinner may like the Matute restaurant. It offers both national and popular foreign dishes. Its Currasco hamburger made of fresh beef filets is a real masterpiece and an example of typical … Read more

Bergen
Ned's is a cozy restaurant open in one of the historic buildings of the city. The number of its frequent visitors is so big that sometimes a table should be ordered several weeks in advance. Among the largest choice of dishes offered to visitors the most popular are medallions of lamb, beef with spicy sauce, sea and salmon platter garnished with white beans. Smaue is considered one of the most prestigious restaurants in the city. Its interior is decorated in the style of past centuries, and the … Read more

Lillehammer
An indispensable product is cod, from which dozens of different dishes are prepared here. It can be fried and served with a vegetable garnish, original soups are boiled with cod, this type of fish is often dried and smoked. At local markets, you can always buy all kinds of fish products made by locals according to unique home-style recipes. One of the most original dishes is “lutefisk” - finely chopped cod liver mixed with caviar. This dish is served in all regional restaurants, it is a … Read more

Molde
Travelers will be also impressed by restaurants that offer poultry dishes, most of which are cooked by old recipes. However, many dishes that are typical for the locals can seem very exotic to foreign guests. In city restaurants, you can taste unusual dishes of whale meat. The most extraordinary dessert here is cloudberry honey. In regional restaurants, you should order venison. It is served as classic steaks or ragout. You can find interesting meat delicacies on food markets. Visitors … Read more

Larvik
In Larvik restaurants, you can try various types of smoked, pickled and dried fish, and healthy food lovers will enjoy a decent selection of dishes with boiled fish. One of the most common snacks in the region is dried cod "klippfisk". Once the fish was preserved in such a way to keep it edible as long as possible, and today it is a popular complement to beer and other refreshing drinks. Herring is used for cooking the popular dish "oboknafisk", fish fillets salted with spices giving a … Read more