Sightseeing in Tromso - what to see. Complete travel guide 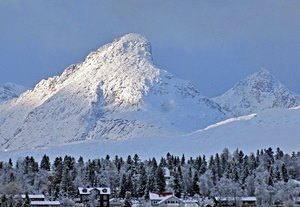 The picturesque and lively town is surrounded by mountains, islands and fjords from all sides. In addition to numerous attractions of Tromso features a large choice of night entertainments. There are really many bars, nightclubs, restaurants and discos here. This is a true paradise for shopping. Shopping malls and boutiques can be found here right at every step.
Returning to the theme of attractions and sightseeing, it is surely worth mentioning Arctic Cathedral, which has become the undisputed symbol of Tromso. The cathedral is like a majestic iceberg. This is a true work of architectural art. This church is decorated with huge mosaic windows, so it looks like a palace of the Snow Queen from the fairy tale. Learn about the history of the city and look at collections of historical finds in Museum of Tromso, which was organized in the 19th century. Hunters and fishermen will find much interesting in visiting Polar Museum, which exhibits a collection of antique weapons, fishing gear and other attributes associated with fishing.
This city is also home to one of the main religious sights of Norway - Tromso Church. This is an ancient wooden building, which has managed to survive till our days.

The city has also prepared a surprise for fans of beer, because a great brewery can be found here. It was opened over a hundred years ago. Here is prepared the best dark beer in Norway are. Diverse your cultural program with the visit to Northern Lights Observatory, in which you will be offered to attend fascinating lectures and a laser show. When you want to admire the panorama of the city, move your feet to the top of the Storsteinen Mountain which is equipped with multiple viewing platforms. You will find several cozy restaurants at the foot of the mountain. There is also a lift, which will take you to the top in minutes. Theater fans and music lovers should definitely visit Culture House, where they will be able to visit concerts and orchestra performances. Copyright www.orangesmile.com
A great vacation spot for tourists with children and all nature lovers will be a Polar Zoo. It is the world's northernmost wildlife park. Its visitors can see animals who have perfectly adapted to the conditions of the harsh winter, for which these places have long become home. Typical zoo inhabitants are lynx, bears, reindeer, wolves, elk, and musk oxen. The zoo is completely different from an ordinary one. Unique, close to natural, environments have been created here for animals. The zoo is open to visits all year round. 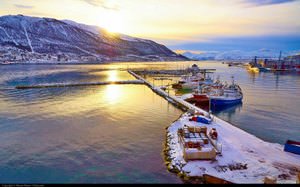 The Cathedral of the Blessed Virgin Mary is a no less interesting sight. It is the northernmost Catholic cathedral in the world. Originally, a spectacular neo-gothic building was created as a private residence of the bishop. Only later it was converted into a cathedral and consecrated in 1861. Over the years of its existence, the cathedral has experienced many important historical events. During the Second World War, it housed a refugee camp. In 1969, a strong fire broke out in the church. With the efforts of local residents, it was restored in the shortest possible time.
Trips to the nearby island of Kvaloya, also known as the island of whales, are extremely popular among lovers of guided tours. The island is remarkable not only for its natural beauty but for unique archaeological sites. Researchers found signs of cave paintings aged more than 2500 years there. 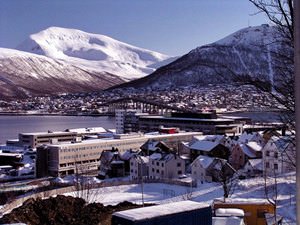 Tromso attracts not only admirers of nature and history. Professional climbers are common visitors here, as well. They come to these places to conquer the majestic Store Jaegervastind Mount, 1596 meters high. It became possible to conquer the mountain only in 1898 for the first time. Those who have never been engaged in mountain climbing can walk down the foothill areas. There are plenty of beautiful lakes and forests there.
Lovers of event tourism will be interested in visiting Tromso in January. The International Film Festival - the largest of its kind in Norway - is held in this month. At the end of the month, they hold an equally exciting music festival called the Northern Lights. Classical and modern musicians take part in it. Annual world's most northern marathon is held in Tromso in June.
This guide to iconic landmarks and sights of Tromso is protected by the copyright law. You can re-publish this content with mandatory attribution: direct and active hyperlink to www.orangesmile.com.

City tours, excursions and tickets in Tromso and surroundings

National and city parks around Tromso
♥   National Park 'Øvre Dividal' , 110.7 km from the center. On the map

The city of Bergen will be even more interesting in terms of the number of excursions. The famous Hanseatic waterfront is considered the heart of the city. Bergenhus Fortress, the building of which took place in the middle of the 13th century, is a no less interesting destination. There is one more interesting landmark near the fortress - Rosenkrantz Tower - that was built three centuries later. The fish market is also a prominent place in the city. It has worked on one of the city's squares for more than 700 years. Art connoisseurs are recommended to visit the Museum of Art, where they will be able to see works of Picasso, Munk and Miro. On the shore of a lake one can see a beautiful building - a mansion of Edvard Grieg, better known under the name Troldhaugen. … Open 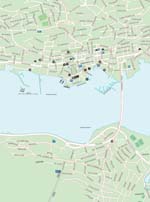 Search touristic sites on the map of Tromso

Sightseeing in regions nearby Tromso

Lapland
Beach goers will be interested in the western and southern parts of Lapland, where many rivers flow. Relaxing vacation on the beach can be successfully combined with fishing; fishers are attracted by these places. Those who prefer hiking would find northern Lapland more interesting; it features beautiful forests and numerous tourist routes. Winter holidays deserve special ... Open »
Rovaniemi
Each year the resort offers new entertainments to its guests. You can ride on a reindeer sled, go to a ski base, or visit one of the modern ice rinks. It is also possible to rent a snowmobile and ride along the scenic landscapes of this place. In the evening rest after an active day by relaxing in sauna or visit one of the local restaurants. Every evening concerts and ... Open »
Murmansk
After the war, the city was ruined but then restored from scratch. Moreover, the city expanded its territory, so its streets moved upwards, close to the hills where citizens gathered berries. The building of the seaport played a big role in city history. Today, it is a grand modern building where thousands of people work. Murmansk is the only city with the population of over ... Open »
Oulu
Charles IX was the founder of Oulu, which received the status of the city in 1605. By the middle of the 18th century Oulu turned into the largest shipbuilding center from a simple port town. In 1882 almost all buildings were destroyed by fire, then the city was renewed from the ruins after the Second World War, so the largest part of the historical heritage is now lost. ... Open »
Trondheim
Nidaros Cathedral is one of the major historical and religious buildings in the city. This is the oldest shrine in Scandinavia. The cathedral is made in the excellent gothic style more than ten centuries ago. The facade of the church is decorated with figures of kings and saints. Step inside and you will be amazed by massive columns. You will also see a niche filled with coins ... Open »
Molde
It seems that this town is simply created for unhurried walks. The symbol of the city is a fountain called "The Girl with Roses”, which is located near the town hall. An interesting fact about Molde – you will really see so many roses in this town even though the climate here is rather severe. The sculpture in the center of the complex of fountains depicts a beautiful girl ... Open »

All about Tromso, Norway - sightseeings, attractions, touristic spots, architecture, history, culture and cuisine. Prepare your trip together with OrangeSmile.com - find out the 'must see' things in Tromso, which places to visit, which excursions to take, where the breathtaking views are waiting for you. Planning your trip with this travel guide will help your to get the most out of Tromso in few days.