Nature of Japan - national parks and reserves for active recreation 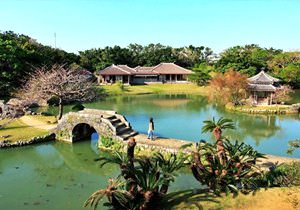 Japan is a state located on the islands. More than half the country’s territory is covered with mountains. The length from north to south, as well as the island character, determined the natural diversity of Japan in each separate area. The Japanese climate is under constant influence of Monsoons and sea currents. It has a pronounced change of seasons. In general terms, the climate of the Japanese archipelago is relatively mild and close to temperate. From island to island, climatic conditions vary: from subarctic on the island of Hokkaido to subtropical in dry Okinawa.
The soul of Japan - religions and languages
The actual state language of Japan is Japanese. The locals call it nihonga. It is worth noting that more than 142 million people speak Japanese …
Read further
Japan is located at the junction of tectonic plates which is the reason for the presence of several active volcanoes. Among them are Showa-Shinzan and Sakurajima. The country has a variety of volcanic landscapes: from the caldera to the caves of Fugaku Fuketsu .This is where the cold winds blow from. Many geothermal zones with their hot springs are situated in Japan. The country is surrounded on all sides by seas. The abundance of picturesque water landscapes is due to the large amount of rainfall. In the coastal areas, there are beautiful sandy beaches, majestic cliffs, long tidal bands and coral reefs inhabited by various species of birds and sea animals.
The natural beauty of Japan is represented by many beautiful places, with each one creating an atmosphere of serenity. The most famous natural landmark is Mount Fuji, the current stratovolcano of Honshu Island. Fuji is popular among guests of the country and the Japanese themselves, who consider it a shrine. Every Japanese dreams of reaching the peak of this mountain at least once in their lifetime. It gives tourists exciting experiences and pleasure from contemplating its divine appearance. Fujiyama is located in the Fuji-Hakone-Izu National Park. The Park also includes five lakes, geothermal springs and the Izu Peninsula. One of the main beauties of these places is Lake Ashi, in which the mountain is reflected. Water tours are organized along the lake. To the south-east, is located the double volcano Owakudani which is still active. The main attractions can be easily seen from the monorail track. You can climb to the top of Fujiyama by cable car. Copyright www.orangesmile.com
Japan economy - strengths, wealth and problems
The Japanese economy today is among the five most developed economic structures in the world. But the Japan’s share of the global GDP is constantly …
Read further
Another pearl of Japanese natural wealth is the Jigkudani Monkey Park. This place is famous for its warm springs. The name of the Park literally translates as “the hell valley”. The name has taken hold because of the steam veil constantly hanging in the air and the boiling water flowing from the frozen ground. The Park is surrounded by steep rocky cliffs and dense forests. A special color is given to it by a large population of wild Japanese monkeys that inhabit this place in the winter season when the earth is covered with snow. Monkeys come from steep mountain slopes and from snow-covered forests to swim in warm springs and bask in hot fumes. In the evenings, they return to their habitats. 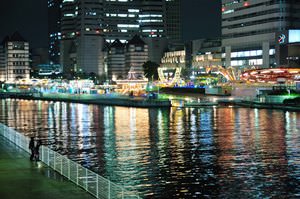 Shirakami-Sanchi is a mountain reserve in the province of Aomori. Due to the unsuitability for breeding mushrooms shiitake, many beeches spared by farmers were preserved in it. Together with beech trees, hornbeam, dimorfant and Cercidiphyllum japonicum (Katsura) grow in the forest. In the reserve, there is a triple waterfall which has become a favorite tourist destination. A magnificent view of the surrounding area opens up from the highest peak of the reserve. Every year, musical festivals are organized at the foot of the mountain. Hakone National Park is located on the island of Honshu. It is famous for their geothermal spring which has made it the center of spa treatment. A combination of the picturesque nature of the region with the curative effects of the springs helps improve well-being and promote a healthy vacation.
Unique sights of Japan from our series 'Extreme places on Earth'
These spots really worth the attention of a real traveler-researcher. …
Read further
Sagano Bamboo Forest is located in Kyoto province and is a green grove surrounded by city landscapes which are made up of thousands of evergreen trees and very tall bamboo stems. Stems swaying in the wind produce melodic sound, resembling the ringing of wind chimes common to the area. This sweet melodic sound is heard throughout the region. At night time, flashlights illuminate the road. Difficult parts of the trails where the ground has been broken by spreading roots are equipped with graceful hinged bridges. In local shops, you can buy handmade souvenirs such as baskets, dishes, household goods all made from bamboo.

National and city parks of Japan
♥   National Park 'Akan' . On the map

Famous places and sights of Japan 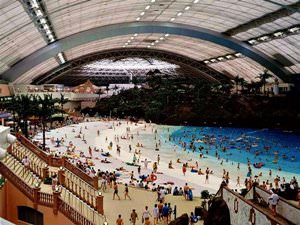 One of the most enormous and spectacular water parks in the world is located in the Japanese city of Miyazaki; it's called Seagaia Ocean Dome. This title fully reflects the main feature of the water park. It is covered and, in fact, represents a huge metal dome with a retractable roof. When the weather is nice, the roof is set aside and guests of the water park can sunbathe. If the weather goes bad, the dome is closed, and guests can still relax in a comfortable environment.

Ocean Dome is the largest indoor water park in the world. That allows it to be in the Guinness Record Book. A huge dome hides the real tropics. It even has a luxurious beach with natural sand. You can see the slender palm trees and very real monkeys crawling trees everywhere. There are numerous attractions for fans … Read all 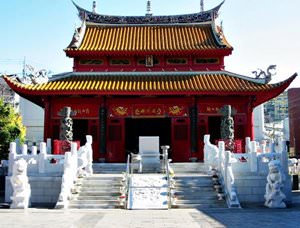 Several monuments of the Confucian culture have survived in Japan. One of them can be seen in the city of Nagasaki. That's the Confucius Shrine. The building, which visitors can admire today, was built in 1893. The mausoleum is located in the place where the world's only Confucian Temple located beyond the borders of China was built. The ancient temple, as well as other Confucian sites, was founded as a place of worship and conducting training lectures.

In 1945, the building was seriously damaged after an explosion of the atomic bomb. It was reconstructed only by 1967. Full reconstruction of the temple took place in 1982. Today, it is an incredibly beautiful building created in full compliance with the Confucian culture. White stone steps lead to the entrance. Many beautiful sculptures … Read all
All unique sightseeing Japan

Cultural sights in regions of Japan

Kyoto
The Golden Pavilion is considered to be perhaps the most famous monument of architecture. Incredibly beautiful three-story building was erected in the late 14th century. Walls of the pavilion are covered with gold foil that gave the name to the construction. Today, it is considered to be a true epitome of luxury; inner hall of the pavilion is also distinguished by the abundance of the unique jewelry. The pavilion, which visitors can see today, was built in 1955 and it is a replica of the old … Read more

Osaka
A majestic garden with a pond is located on the premises of the temple. The pond is home to turtles. This marvelous nook of nature bears a symbolic meaning of Buddhist paradise. The main symbol of the city is the Osaka Castle. This is the largest fortifying construction on the territory of the country. The castle was built in the 16th century. Since that time its building has survived till nowadays and appears to numerous visitors in all its glory and majesty. The Nishinomaru garden is located … Read more

Sapporo
A trip to the Nakajima park will be full of impressions. The marvelous scenic parkland locates also several remarkable cultural objects. This is a place of location of the Kitara Concert Hall and the Hokkaido Museum of Literature as well as the Children’s Hall offering a rich and various entertainment program for the youngest visitors of the park. Another remarkable architectural object constantly attracting the attention of tourists is still the Sapporo TV Tower. Its height is 147m. On the … Read more

Fukuoka
Among the most visited cultural institutions remains Hakata Machiya Folk Museum acquainting visitors with features of handicraft and national traditions. Among its exhibits there are hundreds of unique handicrafts, traditional costumes and jewelry, musical instruments and other items that were used during national holidays and festivals. One of the major attractions is located in the picturesque Higashi Koen park. We are talking about the monument to the founder of the Nichiren Buddhism, … Read more

Hiroshima
In memory of local children being victims of the bombing the Children's Peace Monument was opened. It is a beautiful monument dedicated to Sasaki Sadako, a girl who hadn’t enough time to make 1000 paper cranes due to the rapidly developing radiation sickness. The Peace Memorial Park is a must-see destination; excursions around it would take more than one day. Fans of historical sites would be interested in the Hiroshima Castle; a beautiful medieval building was completely rebuilt after the … Read more

Nagoya
One of the main peculiarities of Nagoya is a variety of marvelous parks and squares. The Higashiyama Park is among the most interesting places here. The park covers quite a large territory and is conditionally divided into several zones. Here, you can find an exciting amusement park, a small zoological garden and an interesting botanical garden with a rich collection of exotic plants. It is also important to note that there is one of the most beautiful skyscrapers in the city, the Higashiyama … Read more

Kobe
The city offers dozens of museums and galleries, and Hakutsuru is among the most unusual ones. This museum occupying a beautiful historic building decorated in the style of past years introduces visitors to sake-making traditions. Local people consider the strong rice drink to be one of their main national symbols. During the tour, visitors will be told a lot of interesting secrets of its brewing. An important part of the excursion is sake tasting. A very revered site is … Read more

Japan: Map of sightseeing in regions